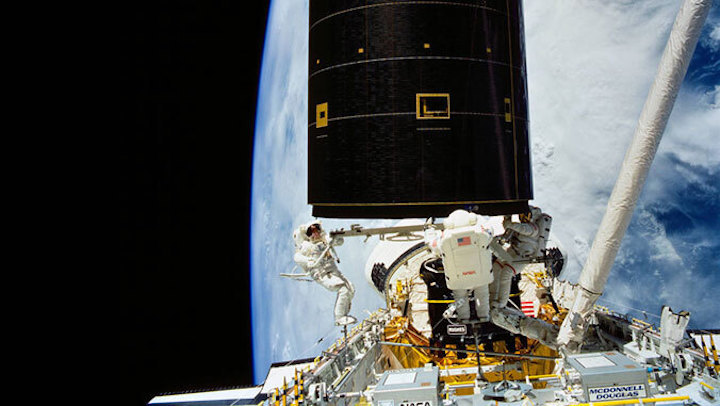 Teamwork is critical to astronauts as they face the dangers of space. Richard (Rick) Hieb, a former NASAastronaut, explained during a presentation hosted by the University of Hawaiʻi at Mānoa College of Engineering how teamwork played a key role in his career. Hieb cited personal examples from his space missions to demonstrate why following, collaborating and leading effectively are vital in aerospace engineering during the talk on October 1.

If you want to be an astronaut, go figure out what it takes,
—Richard (Rick) Hieb

Hieb also provided advice for students aspiring to become astronauts. “If you want to be an astronaut, go figure out what it takes. Go read about it, learn about it and develop those skills. Get the experiences you need: fly airplanes, jump out of airplanes with a parachute, scuba diving, change the tires on your car, change the oil on your car.”

Hieb’s talk was geared toward students and faculty in aerospace engineering—one of two concentrations for the BS in engineering science degree program.

“It is such an honor for someone like Astronaut Richard Hieb to speak to our students and faculty here at UH,” College of Engineering Dean Brennon Morioka said. “There is so much opportunity to build upon aerospace engineering and space exploration with well-established programs like the HawaiʻiSpace Flight Laboratory, the offerings in the Hawaiʻi Institute of Geophysics and Planetology and now the aerospace engineering track in the College of Engineering. We are excited about what Hawaiʻi‘s future could look like and the interest someone like Astronaut Hieb might raise.”

Hieb began his career as an aerospace engineer working on mission operations for NASA and was then selected as a NASAastronaut in 1985 and flew on three space missions in the early 1990s, including the maiden voyage of the Space Shuttle Endeavour, which was built to replace the lost Space Shuttle Challenger.

The 1992 Endeavour flight was a satellite rescue mission that involved high profile spacewalks, including the first and only three-person spacewalk where Hieb and his colleagues captured and released a 9,000-pound satellite. This spacewalk held the record for more than 10 years as the longest ever, at just under eight and a half hours.

“The only reason this worked is because you have a team that has trust. They trusted us to do our job. We trusted them to develop the procedures. We all trusted the people that were controlling that satellite because it was being controlled from the ground,” said Hieb, who has logged more than 750 hours in space, including more than 17 hours of extra-vehicular activity (spacewalk).

In 1995, Hieb left NASA to enter the private industry, where he spent 20 years as an aerospace executive working for companies such as AlliedSignal, Orbital Sciences Corporation and Lockheed Martin. He is currently a scholar in residence instructor at the University of Colorado Boulder. Hieb earned a bachelor of arts degree in math and physics from Northwest Nazarene University in 1977, graduating with highest honors, and a master of science degree in aerospace engineering from the University of Colorado in 1979.