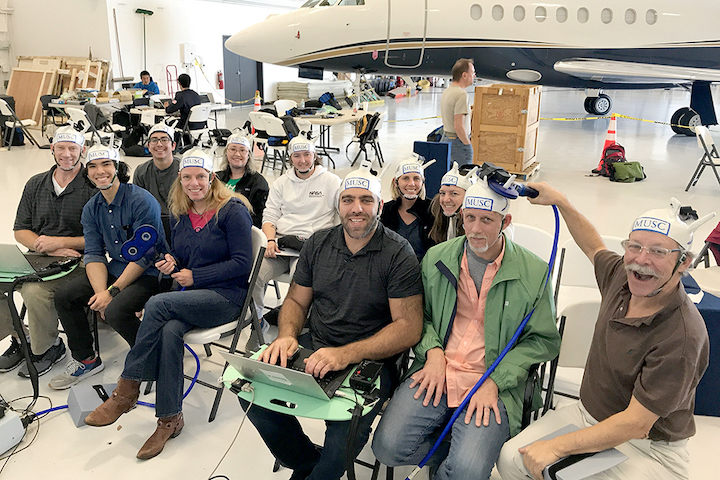 Not many researchers get the chance to float, weightless, 32,000 feet above the Earth. Medical University of South Carolina scientists usually conduct research in labs – controlled settings where they can carefully repeat experiments to double-check results. But with an eye toward what real astronauts might experience in future space travel, a few scientists recently took to the skies to do brain research in zero gravity.

Neuroradiologist Donna Roberts, M.D., and neuroscientist Badran collaborated on the project to conduct transcranial magnetic stimulation, or TMS, on themselves and a group of volunteer assistants, mostly from the Department of Psychiatry and Behavioral Sciences in the MUSC College of Medicine.

Roberts has spent years studying how zero gravity and microgravity affect the human brain – in fact, that was her motivation for going to medical school. This experiment was primarily a test case to show that TMS could be safely used in zero gravity and to compare participants’ results under the force of Earth’s gravity to their results in zero gravity.

During a TMS procedure, a magnetic pulse is sent through the skull into the brain to stimulate electrical activity. The pulse is highly localized – it doesn’t reach the entire brain. The TMS administrator places a coil over the subject’s head; when the subject’s thumb twitches, the administrator knows the TMS coil is in the right spot.

Here on Earth, TMS is FDA approved for hard-to-treat depression. Scientists at MUSC and elsewhere are also investigating using TMS for post-traumatic stress disorder; to treat cravings and pain in people under treatment for opioid use disorder; and in physical and mental rehab for stroke patients. Depression could be a concern for people on long-term missions far from Earth who don’t expect to set foot on solid ground for years, and Roberts and Badran said TMS could be a useful and space-saving tool to pack on long-term space missions, rather than an entire pharmacy’s worth of medications.

“Ultimately, you don’t want to go to Mars or an interplanetary mission with all these medications. And you can’t easily set up a chemistry lab to synthesize all of them. So TMS would be a very clear, easy solution for neuropsychiatric issues. That’s the long 20-year vision,” Badran said.

It also has the potential to keep astronauts in good shape cognitively on long-term flights so they’re ready to get to work when they land on the moon or the red planet.

But first, researchers must figure out what a “normal” reading in zero gravity should look like.

It’s already known that medications metabolize differently when a person is in space. Astronauts who take sleeping pills, for example, have to figure out through trial and error the proper dosage in space, Roberts said.

"If there were a way to keep the brain in shape on the way to Mars, that would be very useful. That’s why NASA is interested in this technology. But in order to use it in space, we have to understand, ‘Is there a difference in the way astronauts respond to it here on Earth versus up in space?’"

And Roberts’ previous research, comparing astronauts’ brain MRIs before and after a trip to the International Space Station, showed physical changes in the brain that correlated to changes in the astronauts’ motor skills and cognitive performance.

“If there were a way to keep the brain in shape on the way to Mars, that would be very useful. That’s why NASA is interested in this technology. But in order to use it in space, we have to understand, ‘Is there a difference in the way astronauts respond to it here on Earth versus up in space?’ just like the difference they experience in medications. So that was what this study was really based on,” she said.

And this is where the scientists got to have a little fun. To test TMS in zero gravity, they would board a special plane operated by Zero Gravity Corporation, which offers zero gravity flights for personal adventure, media productions and research.

The plane, dubbed G-Force One, flies a series of arcs, heading upward at 45 degrees and then back down at 45 degrees. For the brief 20 to 30 seconds between going up and coming down, everyone in the plane becomes weightless. Anything not bolted down floats up. And that mere 20- to 30-second window was the time during which Roberts and Badran had to run their TMS test.

"We had a fixed start date, a fixed time period to do the experiment and everything had to go perfectly – and everything hinged on creating this thing that didn’t exist."

They would have a total of 30 arcs, or parabolas, to work with. There were 10 people in their group, split between men and women, and each person needed to do the test at least twice to get a good sample.

But first, there were some logistics to overcome. In the lab, there can be a lot of fussing with the equipment to get the coil to the exact right spot on someone’s head. With such a short window for performing the test on the plane, there wouldn’t be time to futz with the machinery. They needed a foolproof way to ensure the coil would be in the right place at the right time.

“We all really focused on the small things,” Badran said. “This study was really a one-shot deal. The flight was prebooked. Everything was set. We had a fixed start date, a fixed time period to do the experiment and everything had to go perfectly – and everything hinged on creating this thing that didn’t exist.”

So Badran got hold of a motorcycle helmet and a Dremel saw and got to work. He found he could fit a TMS coil into a niche he cut into the helmet, but the contraption was too heavy and wobbly to be practical.

Next, he turned to using fiberglass casting tape, the same material used to make casts for broken bones. Each participant sat for a fitting, and Badran crafted a lightweight, durable helmet that fit the individual’s head, with an attachment area for the TMS coil that ensured the magnetic pulse would reach the right spot on that individual’s brain – no tinkering required.

Roberts and Badran’s volunteer team consisted of people from the Department of Psychiatry and Behavioral Sciences with experience administering TMS, since they all would need to take turns as both subjects and administrators. They wanted people who were roughly the age of actual astronauts, so the average age was in the 30s.

“Everyone that was a flier, they didn’t just get to come and fly and have fun. They were actively part of the research team, too,” Badran said.

Roberts and Badran knew they had one chance to make the experiment work. These flights are costly, and the bulk of the research grant was going toward that expense. In each 20 to 30 seconds of weightlessness, they would need to start the software on their computers, which would send a signal to the coil, register a thumb twitch and then report back that the TMS had worked. If it didn’t register a thumb twitch, then the system would increase power and send another signal until a thumb twitch registered. But if it didn’t work at all, they would have to troubleshoot on the fly – or face the possibility of the entire experiment being a complete failure.

The MUSC group shared the flight with three other organizations conducting space research. Because the TMS machines pulled power from the aircraft, Badran had to run a test on the ground first, at full power, to ensure they wouldn’t overload the plane. It was pretty close, he said, but the flight crew gave them the go-ahead. So up they went.

The handcrafted helmets performed beautifully. They got at least three measurements for each person, which they could compare to multiple measurements taken on the ground before and after the flight. And as a bonus, the experiment was way more fun than your typical lab experiment.

Their paper, published Sept. 21 in Nature Microgravity, shows that less electromagnetism was needed in zero gravity than on Earth to induce a thumb twitch. That suggests neurophysical changes happening in the brain, but there are several possible explanations, ranging from the brain physically shifting within the skull to neurons reacting more strongly to stimulation. There’s more to be learned, they said.

It’s an issue near to Roberts’s heart, as she has argued multiple times, most recently in an opinion piece in The Lancet Neurology, for more research into brain changes in space explorers.

Having shown that TMS is possible in zero gravity, the team is well-equipped to continue finding answers to these questions.