NASA’s Aerospace Safety Advisory Panel (ASAP) is wondering if Boeing will be able to meet the current schedule for Starliner flights. Boeing plans to refly its Orbital Flight Test in December, one year after the first attempt suffered a number of anomalies, followed by a test flight with a crew next June. ASAP wonders if Boeing will be ready. In addition to the 80 recommendations of a Boeing-NASA independent review team, ASAP said Boeing itself identified another 31 and “other issues” have arisen since.  ASAP also wants NASA to formalize a lessons learned process that crosses program boundaries and involves not just NASA, but the broader community.

Boeing is building the CST-100 Starliner capsule as part of NASA’s commercial crew program to ferry astronauts to and from the International Space Station (ISS). Modeled after the commercial cargo program, it is a Public-Private Partnership (PPP) where both the company and the government invest in development and the government agrees to purchase a certain amount of services. The company retains ownership of the vehicle, but must meet NASA safety requirements before the agency will put its astronauts on board.

NASA contracted with Boeing and SpaceX to develop commercial crew space transportation systems. SpaceX’s Crew Dragon has completed its test flights and the first operational mission is scheduled for October 31.

The uncrewed Orbital Flight Test (OFT) took place in December 2019, but was not completely successful.  Due to software errors, it could not dock with the ISS.  While troubleshooting that problem, Boeing discovered another error that could have caused a catastrophic ending to the mission. They fixed it in time and the spacecraft landed safely two days after launch. 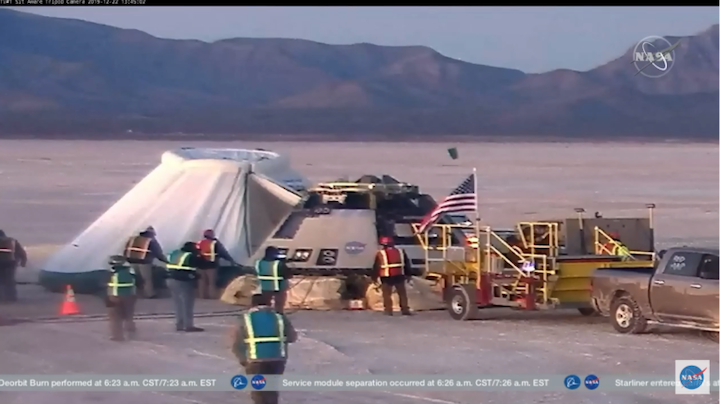 A Boeing-NASA Joint Independent Review Team (JIRT) investigated what went wrong and made a total of 80 recommendations, 61 to fix the software problems and the rest to fix a separate problem with Starliner’s communications system.

Boeing decided in April it would refly the uncrewed test flight, dubbed OFT-2, before putting people aboard. It is working under a $4.2 billion fixed price contract with NASA so must pay for the reflight itself. The company  took a $410 million pre-tax charge against earnings in December 2019 to do so.

As of August, the plan has been to launch OFT-2 in December, the Crew Flight Test (CFT) in June 2021, and the first operational mission in December 2021, but all of those dates are subject to change.

ASAP member Don McErlean said today that in addition to the JIRT recommendations, Boeing’s own Independent Review Team made 31 recommendations, and more issues have arisen. He did not provide any details. The point is that there are many recommendations to resolve and that takes time.

Boeing has committed and is working towards correcting all these items prior to OFT-2. The Starliner program is working very closely with the Joint Independent Review Team to fully understand each recommendation and develop actions to address each item and to close the loop with the JIRT to ensure action plans meet the intent of the recommendation. …

[Our] final observation was that the process of resolving and validating these problems is … a very intense and significant amount of work. And we continue to worry, and show a source of concern, as to whether or not their progress towards final resolution will, in fact, meet the currently evolved schedule.

Other issues with the Starliner system have been identified during this review process and mitigation plans are in process to resolve or mitigate these issues as well.

It remains to be seen that all of these issues, including the well publicized software issues, will be resolved, but we are optimistic. The program has stated that Boeing’s effort is, as expected, very aggressive. So, again, it remains to be seen whether or not we will be able to support the schedule. That is for the future to decide.

His reference in the last paragraph to “the program” presumably is to NASA’s Commercial Crew Program, which manages the contract with Boeing.

NASA is embracing PPPs for its future human spaceflight plans.  Future space stations in low Earth orbit (LEO) and the Human Landing Systems (HLS) to take astronauts from lunar orbit down to the surface and back, will use the PPP model.

ASAP Chair Patricia Sanders said today that this new way of doing business makes it imperative that lessons learned be captured and shared.

Instituting a formal review process will ensure that lessons learned, both in development and during operations from the commercial crew providers, for example, Boeing to SpaceX, can benefit other agency programs and future commercial partners. …

It is imperative to share lessons learned across program boundaries, not limited to technical issues discovered during development and operational mission anomalies, but it also pertains to management and organizational experience. …

The panel advises the agency to formalize the process to propagate and communicate lessons to the agency and broader community in order to minimize the risk of repeated mistakes.