Data from an old NASA mission to our sister planet may contain overlooked evidence for the gas phosphine, a potential biosignature 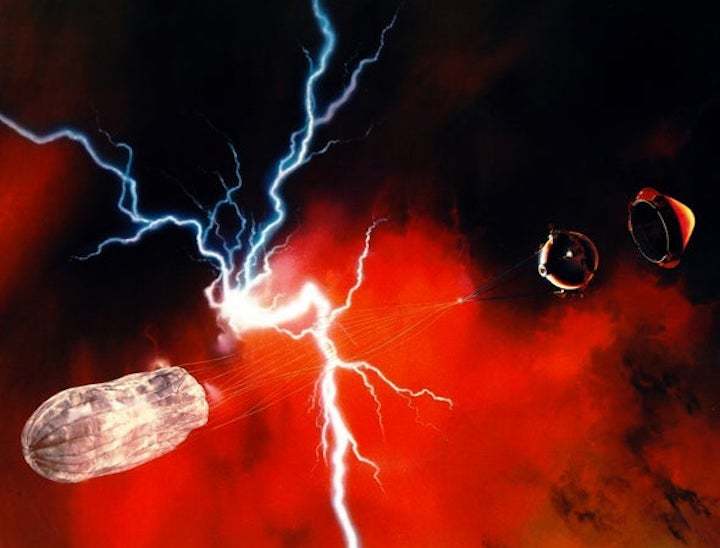 Earlier this month scientists announced the surprising discovery of phosphine on Venus. This compound of phosphorus and hydrogen could be associated with life. While efforts to confirm the finding via observations from Earth or even fortuitously planned spacecraft flybys are underway, archived data from a decades-old NASA mission to Venus may have been hiding much sought-after verification in plain sight—with potentially more revelations to come.

The apparent discovery of phosphine in the Venusian atmosphere has been both widely heralded and greeted with caution. To double-check the detection, scientists are eager for more data, either from large telescopes or entirely new interplanetary missions. If the presence of the gas can be confirmed, researchers would be forced to grapple with its origins—including the possibility that it is being produced by some form of single-celled life floating in the planet’s clouds. “If, indeed, phosphine is there, and it is a sign of life, then this would be a way of starting to piece together a biosphere,” says Clara Sousa-Silva of the Massachusetts Institute of Technology, who is a co-author of the paper that reported the discovery.

Many experts believe the best chance of verifying Venusian phosphine lies in atmospheric probes that can directly sniff out the gas. But such missions are not futuristic flights of fancy—they have, in fact, been launched before, with notable examples including the former Soviet Union’s long series of Venera spacecraft and NASA’s Pioneer Venus Multiprobe, a mission that dropped four probes into the planet’s atmosphere in December 1978.

On the biggest of Pioneer’s probes, an instrument called the Large Probe Neutral Mass Spectrometer (LNMS) looked for gases in the atmosphere, with mission scientists focusing on molecules such as carbon dioxide, sulfur dioxide and argon that were known to be abundant there. After taking another look at the data, however, Rakesh Mogul, a professor of biological chemistry at California State Polytechnic University, Pomona, posits that scientists on the mission underestimated their instrument, which may have spotted trace amounts of other molecules—including, excitingly, phosphine.

“We were able to extract some data from the literature from about 40 years ago,” says Mogul, whose team recently posted its findings on the preprint server arXiv.org. “And we think we’re able to identify some interesting things. We believe that the evidence suggests the presence of phosphine.”

Instruments such as the LNMS identify molecules by measuring their speed as they impact a detector, enabling their mass to be calculated. Mogul suspects that in the initial analysis of the LNMS data performed in the 1980s, scientists prioritized those molecules already thought to exist in the Venusian atmosphere. “They were interested in the bulk properties of the atmosphere and how those properties change as you go up and down at altitude,” he says.

The sensitivity of the LNMS instrument may have detected more molecules than thought, however, including phosphine. “People discounted [these molecules] because they thought there was no way” they were present in the atmosphere, Mogul says. In the LNMS data, one could easily overlook the subtle evidence of the molecules’ presence—especially if that person did not conduct a targeted search. It took a bombshell announcement—and more than 40 years—to discern what may have been awaiting discovery in that information all along.

If this interpretation of the Pioneer results is correct, Sousa-Silva notes, it would be an exciting rapid verification of her team’s detection of phosphine. Such confirmation would also suggest that the compound has been present in the Venusian atmosphere for at least four decades, meaning there must be some process that is replenishing it—whether biological or not. In other words, it would mean the newly detected phosphine “wasn’t just one weird event that we managed to catch,” she says.

Not everyone is convinced. Planetary scientist Mikhail Zolotov of Arizona State University argues that the Pioneer data are unlikely to be accurate enough to reliably detect phosphine—instead of, for instance, a more mundane mixture of phosphorus-rich gases and hydrogen sulfide. Furthermore, he says, if the LNMS detection is genuine, it suggests a much higher abundance of the gas than Sousa-Silva’s team found—so much higher, in fact, that it would be incompatible with the mere traces suggested by the recent discovery. If Mogul and his colleagues have correctly interpreted the Pioneer data, Zolotov says, “we’d expect a much higher concentration of phosphine than measured by astronomers, which is also a red flag.”

So far, Mogul and his collaborators have only been able to access a snippet of information from the mission, corresponding to altitudes between 50 and 60 kilometers above Venus. The probe, however, actually took data from an altitude of 90 kilometers all the way down to the surface of the planet. If these data could be analyzed, and if the presence of phosphine could be confirmed, they could reveal more information about the gas’s atmospheric distribution—potentially a vital clue in working out its origin. Unfortunately, although a physical copy of this information is stored in the NASA Space Science Data Coordinated Archive (NSSDCA) at NASA’s Goddard Space Flight Center, access to the archive is currently restricted because of COVID-19.

“We do have some of the data from that experiment, [but] unfortunately it is archived on microfilm and is not easily accessible,” says David Williams, acting head of the NSSDCA. “We are currently trying to get permission for one of our folks to go in to digitize that microfilm, as we have already received inquiries about it. With luck, we may be able to start on it this week.”

Other archived data could prove useful, too. Sousa-Silva is currently looking through old infrared telescope observations of Venus, hunting for additional overlooked evidence of phosphine. And Sanjay Limaye of the University of Wisconsin–Madison, who is a co-author of Mogul’s preprint paper, says old data from the Soviet Venera probes—while unlikely to have been sensitive enough to detect phosphine—may contain evidence for atomic phosphorus, which could hint at the presence of molecular phosphine, too. He notes, however, that the whereabouts of much of those data is unknown. Still, Limaye says, “somebody probably has some records.”

Several spacecraft are set to fly past Venus soon: Europe and Japan’s BepiColombo spacecraft, NASA’s Parker Solar Probe and Europe’s Solar Orbiter. And some of them could potentially look for phosphine. But, just maybe, the clinching evidence will actually come from Earthly archives of missions past, where it has been awaiting recognition for nearly a half-century. “If these measurements are real, [phosphine has] been around [on Venus] for 40 years,” Mogul says. “So something’s making it.” The question would be: What?