February 14, 1960--Nome, Alaska. Airline employee, others, saw a silvery Rocket like object with orange flame trail curving up and away “as if it were manned and controlled.” A similar second UFO was sighted at Unalakleet moving rapidly NW leaving contrails. [X]1

Section X is not very informative:

Alaska has had many UFO sightings [See Section X[; Chronology]. In a typical case February 14, 1960, airline employees and others in Nome about 4:40 p.m. saw a silvery tube-shaped object spouting orange flame from the tail, The UFO moved ENE, then curved up and away ‘as if it were manned and controlled.” Another similar UFO was sighted at Unalakleet the same day, moving rapidly NW and leaving contrails. (Five days later the U.S. Air Force stated the objects were meteors.)2

The source of this information came from local news reports.

Project Blue Book investigated this case and determined they were all reports of a bright meteor. The file is extensive and has forty pages. Some of those are copies of the news media reports cited in the UFO evidence. Details about the case file include the information from the initial reporting (MSG DTG 160314Z)3:

Nome sighting had direction from NW to SE

Unalakleet sighting had from W to E

They concluded it was a meteor

It was seen from the following locations: Nome, Unalakleet, St. Michael, and Holikachuk.

A letter was sent by Peter Walsh to the Air Force on February 22, 1960.7 He complained about the meteor explanation and wanted to know when meteors traveled horizontally and parallel a coastline. He also suggested it was some sort of classified mission by the US or USSR. Mr. Walsh repeated this claim in the news media.

“Of all the information provided to ATIC concerning an UFO sighting the most reliable is usually the general description (not to include the size), direction from the observer, approximate angle of elevation, duration of the sighting (for very short periods), and the time of the sighting. Using only these factors, it was possible by trigonometric methods to determine that the object was approximately 100 miles high.”8

“Subsequent to the ATIC conclusion on this case Dr. Christian Elway, Director of Geophysics Institute, Alaska University, concluded that the object of this sighting was a very bright meteor.”

Major Friend may have been the source of the object being 100 miles high since he performed a calculation on one of the documents (he calculated 98 miles).

I think Blue Book’s analysis was spot on and there is no need to examine it much further. It is important to note that object was visible over an area of 200 miles indicating the object was not at low altitude but, instead, was in the upper atmosphere.

Arguments made by Peter Walsh/NICAP that it could not have been a meteor were: 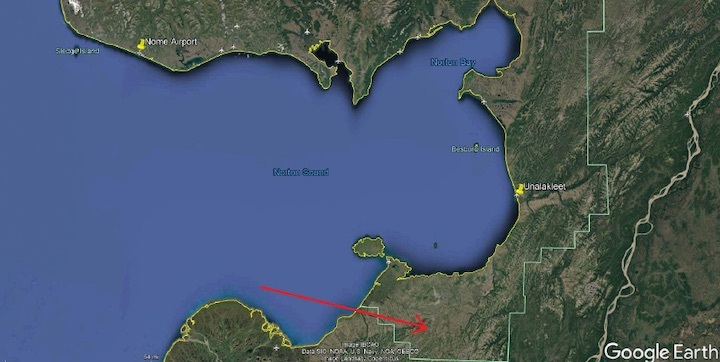 curve upward. None of the observers in Unalakleet reported such a maneuver indicating it was an error in observation.

3. In the March 1960 UFO investigator, there seemed to be confusion about the reports since they claimed that the witnesses reported seeing objects traveling in opposite directions.10 The Blue Book file has no observations indicating different directions. All indicated motion towards the east. One can only assume that NICAP misinterpreted statements by witnesses that they saw the object to the southwest in Unalakleet but to the southeast in Nome meant they saw the object going in two different directions.