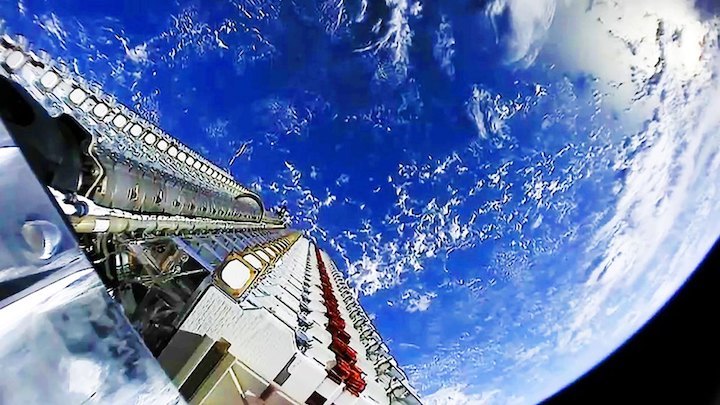 SpaceX has already launched more than 700 Starlink satellites, with thousands more due to come online in the years ahead. Their prime mission is to provide high-speed internet virtually worldwide, extending it to many remote locations that have lacked reliable service to date.

Now, research funded by the US Army has concluded that the growing mega-constellation could have a secondary purpose: doubling as a low-cost, highly accurate, and almost unjammable alternative to GPS. The new method would use existing Starlink satellites in low Earth orbit (LEO) to provide near-global navigation services.

In a non-peer-reviewed paper, Todd Humphreys and Peter Iannucci of the Radionavigation Laboratory at the University of Texas at Austin claim to have devised a system that uses the same satellites, piggybacking on traditional GPS signals, to deliver location precision up to 10 times as good as GPS, in a system much less prone to interference.

The Global Positioning System consists of a constellation of around 30 satellites orbiting 20,000 kilometers above Earth. Each satellite continuously broadcasts a radio signal containing its position and the exact time from a very precise atomic clock on board. Receivers on the ground can then compare how long signals from multiple satellites take to arrive and calculate their position, typically to within a few meters.

The problem with GPS is that those signals are extremely weak by the time they reach Earth, and are easily overwhelmed by either accidental interference or electronic warfare. In China, mysterious GPS attacks have successfully “spoofed” ships in fake locations, while GPS signals are regularly jammed in the eastern Mediterranean.

The US military relies heavily on GPS. Last year, the US Army Futures Command, a new unit dedicated to modernizing its forces, visited Humphreys’s lab to talk about a startup called Coherent Navigation he had cofounded in 2008. Coherent, which aimed to use signals from Iridium satellites as a rough alternative to GPS, was acquired by Apple in 2015.

“They told me the Army has a relationship with SpaceX [it signed an agreement to test Starlink to move data across military networks in May] and would I be interested in talking to SpaceX about using their Starlink satellites the same way that I used these old Iridium satellites?” Humphreys says. “That got us an audience with people at SpaceX, who liked it, and the Army gave us a year to look into the problem.” Futures Command also provided several million dollars in funding.

The concept of using LEO satellites for navigation isn't new. In fact, some of the first US spacecraft launched in the 1960s were Transit satellites orbiting at 1,100 kilometers, providing location information for Navy ships and submarines. The advantage of an LEO constellation is that the signals can be a thousand times stronger than GPS. The disadvantage is that each satellite can serve only a small area beneath it, so that reliable global coverage requires hundreds or even thousands of satellites.

Building a whole new network of LEO satellites with ultra-accurate clocks would be an expensive undertaking. Bay Area startup Xona Space Systems plans to do just that, aiming to launch a constellation of at least 300 Pulsar satellites over the next six years.

Humphreys and Iannucci’s idea is different: they would use a simple software upgrade to modify Starlink’s satellites so their communications abilities and existing GPS signals could provide position and navigation services .

They claim their new system can even, counterintuitively, deliver better accuracy for most users than the GPS technology it relies upon. That is because the GPS receiver on each Starlink satellite uses algorithms that are rarely found in consumer products, to pinpoint its location within just a few centimeters. These technologies exploit physical properties of the GPS radio signal, and its encoding, to improve the accuracy of location calculations. Essentially, the Starlink satellites can do the heavy computational lifting for their users below.

The Starlink satellites are also essentially internet routers in space, capable of achieving 100 megabits per second. GPS satellites, on the other hand, communicate at fewer than 100 bits per second

“There are so few bits per second available for GPS transmissions that they can’t afford to include fresh, highly accurate data about where the satellites actually are,” says Iannucci. “If you have a million times more opportunity to send information down from your satellite, the data can be much closer to the truth.”

The new system, which Humphreys calls fused LEO navigation, will use instant orbit and clock calculations to locate users to within 70 centimeters, he estimates. Most GPS systems in smartphones, watches, and cars, for comparison, are only accurate to a few meters.

But the key advantage for the Pentagon is that fused LEO navigation should be significantly more difficult to jam or spoof. Not only are its signals much stronger at ground level, but the antennas for its microwave frequencies are about 10 times more directional than GPS antennas. That means it should be easier to pick up the true satellite signals rather than those from a jammer.  “At least that’s the hope,” says Humphreys.

According to Humphreys and Iannucci’s calculations, their fused LEO navigation system could provide continuous navigation service to 99.8% of the world’s population, using less than 1% of Starlink’s downlink capacity and less than 0.5% of its energy capacity.

“I do think this could lead to a more robust and accurate solution than GPS alone,” says Todd Walter of Stanford University’s GPS Lab, who was not involved with the research. “And if you don’t have to modify Starlink’s satellites, it certainly is a fast, simple way to go.”

Nor is the navigation technology limited to just SpaceX’s satellites. The bankrupt OneWeb constellation that the UK government is purchasing could also serve as a home-grown navigation system, says Iannucci, “although Starlink is in pole position right now.”

Fused LEO navigation does have its drawbacks, however. The initial Starlink mega-constellation is not expected to operate above 60 degrees latitude, meaning that residents of Helsinki might miss out on its benefits, as would soldiers in any future disputed Arctic or Antarctic regions.

Using the system on the ground would also mean relying upon SpaceX’s own Starlink antenna—described by CEO Elon Musk as looking like a UFO on a stick, and probably very expensive—rather than cheap GPS chips that can fit into smartphones and watches. Any future fused LEO navigation service would, unlike GPS, come with a significant price tag as well, not least because SpaceX needs to start seeing a return on its huge investment in Starlink. For these reasons, not everyone thinks it’s the way forward.

“We looked at this approach a long time ago, and neither the commercial nor the technical capabilities really made sense, which is why we’re working on an independent constellation,” says Xona CEO Brian Manning.

Neither the US Army Futures Command nor SpaceX responded to requests for comment, but the UT researchers are hoping that Musk will see the value of the new technology. “There’s a potential here to really change navigation worldwide,” says Iannucci.