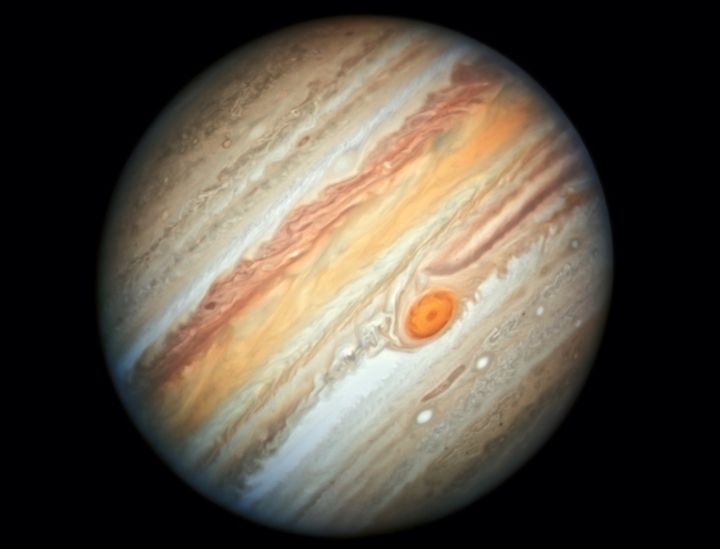 Deep within the interiors of gas-giant planets like Jupiter, materials can be subjected to millions of atmospheres of pressure. In the most extreme conditions, even hydrogen no longer exists in its usual molecular form. Instead, its covalent bonds break down and the material is believed to become a metallic solid. As astronomers seek to understand the physical structures of gas giants, a detailed knowledge of this metallization process is crucial.

To gain these insights, researchers must look to hydrogen’s phase diagram – which depicts how its physical properties vary with temperature and pressure. Although the phase diagram for hydrogen in less extreme conditions has been precisely mapped out, this is far from the case for extremely dense, metallic hydrogen. This gap in knowledge has prompted numerous investigations into where the boundary lies between molecular liquid hydrogen, and its solid metal form. However, it is proving to be extremely difficult to create the necessary high pressures in the lab.

Recently, physicists have used computer simulations to model hydrogen under extreme conditions, using statistical and quantum mechanics to recreate interactions between groups of virtual atoms. For samples containing a few hundred atoms, run over simulation times of several picoseconds, these models predict that under increasing pressure hydrogen undergoes an abrupt first-order phase transition from a molecular state to an atomic state. Applying these results to planetary interiors suggests that there are distinct boundaries between insulating and conductive layers in the phase diagram

However, these latest efforts have faced a major limitation, throwing their findings into doubt. “Even state-of-the-art methods can only model hundreds of hydrogen atoms,” explains Bingqing Cheng at the University of Cambridge. “Since we were previously restricted to using such small system sizes, the first-order transition was assumed.”

The underlying problem with these simulations is that as more atoms are added, their complexity quickly ramps up due to the nature of their quantum interactions. Any larger models would be far beyond the capabilities of today’s most advanced supercomputers. In a new study, Cheng and colleagues in the UK  and Switzerland have approached the problem from a different angle: this time using machine learning – which can build models of complex systems by “training” itself on real data.

“In a nutshell, we exploited machine learning techniques to ‘learn’ the atomic interactions from quantum mechanics,” Cheng explains. “The inputs to the neural network were the positions of each atom, and the outputs were the energy and forces they experience.” This approach drastically reduced the required computing time and cost; enabling the team to simulate over 1700 atoms across a broad range of temperatures and pressures, and for close to one nanosecond.

Within these larger simulated samples, Cheng’s team discovered that molecular-to-atomic transitions did not occur across a clearly defined boundary, as previous studies suggested. Instead, hydrogen underwent a smooth transformation as the pressure rose. This occurred since the “critical point” in the phase diagram, where higher temperatures and pressures cause the physical distinction between liquid and metal to disappear, is “hidden”. This means that the transformation between hydrogen’s insulating and conductive phases occurs both gradually and continuously.

Uncovering this “supercritical” behaviour could have significant implications for our understanding of hydrogen’s phase diagram at extreme pressures. As Cheng describes, her team’s discovery provides a far more accurate picture of how hydrogen exists deep within giant planets. “Inside these bodies, the insulating and the metallic layers have a smooth density profile between them, instead of an abrupt change,” she explains.

Beyond its implications for planetary science, the researchers believe their results highlight a promising potential for machine learning in exploring the hydrogen phase diagram. “We believe machine learning will not only change the way high pressure hydrogen is modelled, but will be in the standard toolbox of computational physicists,” says Cheng. “With machine learning, we can run nanosecond-scale simulations with thousands of atoms, with first principle accuracy. This was beyond our wildest dreams just ten years ago.”

John Proctor at the University of Salford, suggests that exploring the detailed implications of this work for planetary interiors will not be easy. “[Cheng and colleagues] propose that there is no first order liquid-liquid transition in hydrogen, and that planetary models assuming this therefore need to be revised,” he comments. “Since the actual interiors of Jupiter and Saturn do not consist of pure hydrogen – they are fluid mixtures predominantly composed of hydrogen and helium – a lot of further work is required to fully explore the implications of this work for planetary science.”