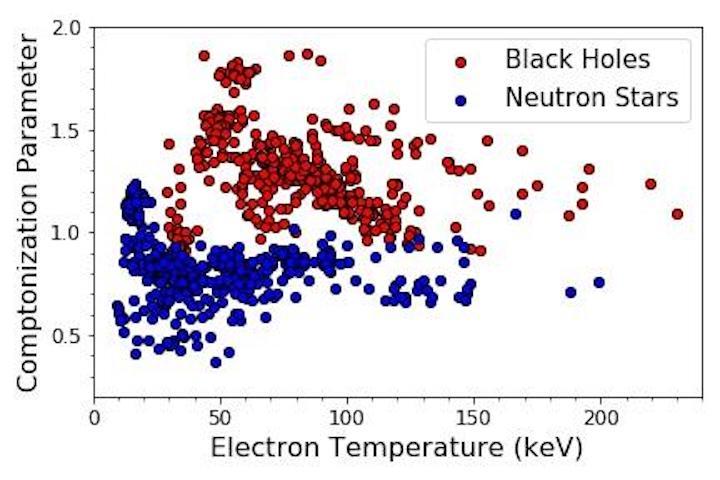 The graph shows measured values of two source properties - electron temperature and Comptonization parameter - from many X-ray observations of about two dozens of black holes and neutron stars. It is clearly seen that the black hole (red symbols) and the neutron star (blue symbols) are almost entirely separated in an unprecedented manner, thus identifying the black holes indubitably.

An international team of astrophysicists has found distinctive signatures of black hole event horizon, unmistakably separating them from neutron stars -- objects, comparable to black holes in mass and size but confined within a hard surface. This is by far the strongest steady signature of stellar-mass black holes to date. The team consisting of Mr. Srimanta Banerjee and Professor Sudip Bhattacharyya from the Tata Institute of Fundamental Research, India, and Professor Marat Gilfanov and Professor Rashid Sunyaev from Max Planck Institute for Astrophysics, Germany and Space Research Institute of Russian Academy of Sciences, Russia is publishing this research in a paper that has been accepted for publication in Monthly Notices of the Royal Astronomical Society.

A black hole is an exotic cosmic object without a hard surface predicted by Einstein's theory of General Relativity. Although it does not have a surface, it is confined within an invisible boundary, called an event horizon, from within which nothing, not even light, can escape. Definitive proof of the existence of such objects is a holy grail of modern physics and astronomy.

Only one supermassive black hole -- with the mass more than 6 billion times the mass of the Sun -- has so far been imaged using the surrounding radiation in radio wavelengths. But stellar-mass black holes -- with masses of about ten times the mass of the Sun -- should bend the spacetime around them at least ten thousand trillion times more than such a supermassive black hole does. Such smaller black holes are therefore indispensable to probe some extreme aspects of nature. When these smaller black holes merge with each other, they could be inferred from gravitational waves. Such waves are transient events, lasting for a fraction of a second and it is of immense interest to have a definitive proof of the existence of a stable stellar-mass black hole, which shine mainly in X-rays by devouring material from a companion star.

A neutron star, the densest known object in the universe with a hard surface, can also shine in X-rays by accreting matter from a companion star in a similar way, characterized by extremely high efficiency of conversion of the rest-mass energy mc2 to radiation, of the order of 20%. In order to prove the existence of stellar-mass black holes, one needs to distinguish them from such neutron stars. The authors of this research have done exactly that. Using the archival X-ray data from the now decommissioned astronomy satellite Rossi X-Ray Timing Explorer, they have identified the effect of the lack of hard surface on the observed X-ray emission, and thus have found an extremely strong signature of accreting stellar-mass black holes.