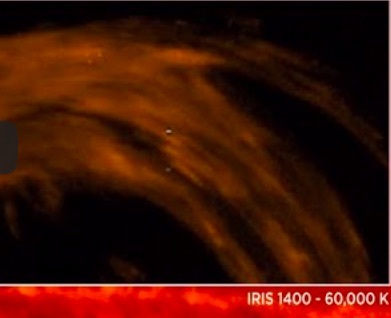 In a paper published today in Nature Astronomy, researchers report the first ever clear images of nanojets -- bright thin lights that travel perpendicular to the magnetic structures in the solar atmosphere, called the corona -- in a process that reveals the existence of one of the potential coronal heating candidates: nanoflares.

In pursuit of understanding why the Sun’s atmosphere is so much hotter than the surface, and to help differentiate between a host of theories about what causes this heating, researchers turn to NASA’s Interface Region Imaging Spectrograph (IRIS) mission. IRIS was finely tuned with a high-resolution imager to zoom in on specific hard-to-see events on the Sun.

In pursuit of understanding why the Sun's atmosphere is so much hotter than the surface, and to help differentiate between a host of theories about what causes this heating, researchers turn to NASA's Interface Region Imaging Spectrograph (IRIS) mission.
Credits: NASA's Goddard Space Flight Center/Scientific Visualization Studio
Download this video in HD formats from NASA Goddard's Scientific Visualization Studio

Nanoflares are small explosions on the Sun – but they are difficult to spot. They are very fast and tiny, meaning they are hard to pick out against the bright surface of the Sun. On April 3, 2014, during what’s known as a coronal rain eventwhen streams of cooled plasma fall from the corona to the Sun’s surface looking almost like an enormous waterfall, researchers noticed bright jets appearing near the end of the event. These telltale flashes are nanojets -- heated plasma traveling so fast that they appear on images as bright thin lines seen within the magnetic loops on the Sun. Nanojets are considered a “smoking gun,” key evidence of the presence of nanoflares. Each nanojet is believed to be initiated by a process known as magnetic reconnection where twisted magnetic fields explosively realign. One reconnection can set off another reconnection, creating an avalanche of nanojets in the corona of the Sun, a process that could create the energy that is heating the corona. In the visualization above, the Solar Dynamic Observatory gives us a full view of the Sun before zooming into IRIS’s up close view of the nanojets, which briefly light up in the magnetic loops.

IRIS gathers its high resolution images by focusing in on a small portion of the Sun at a time. So observing specific events is a combination of educated guesswork and looking at the right place at the right time. Once the nanojets were identified against the backdrop of the coronal rain, researchers coordinated with NASA’s Solar Dynamics Observatory (SDO) and the Hinode observatory, a partnership among the Japan Aerospace Exploration Agency, ESA (European Space Agency), and NASA to get a complete view of the Sun, and confirm whether they were detecting nanojets, and assess their effects on the corona.

The researchers combined the many observations with advanced simulations to recreate the events they saw on the Sun. The models showed that the nanojets were a telltale signature of magnetic reconnection and nanoflares, contributing to coronal heating in the simulations. More studies will need to be done to establish the frequency of nanojets and nanoflares all over the Sun, and how much energy they contribute to heating the solar corona. Going forward, missions like Solar Orbiter and Parker Solar Probe can give more detail into the processes that heat the solar corona.