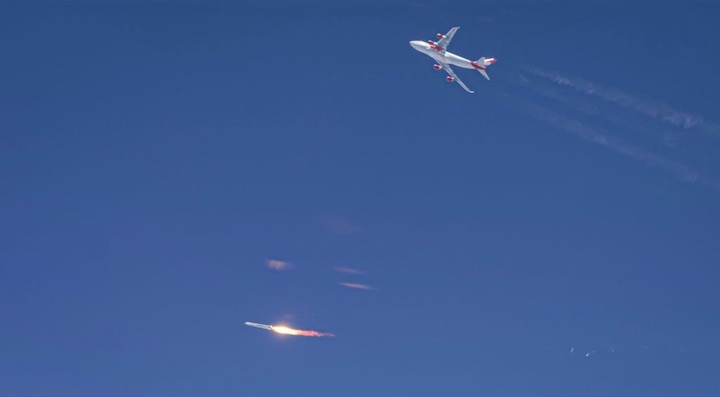 WASHINGTON — The first flight of Virgin Orbit’s LauncherOne rocket failed to reach orbit in May when a propellant line broke seconds after the ignition of the rocket’s first stage engine, the company’s chief executive said July 22.

Speaking at a webinar organized by the Space Generation Advisory Council, an organization for young space industry professionals, Dan Hart said the demonstration mission for the LauncherOne rocket May 25 went well until several seconds after the ignition of the NewtonThree engine that powers the rocket’s first stage.

“We had a component break in our engine system. It was a high-pressure feed line,” he said. Liquid oxygen “stopped going into the engine and our flight was terminated.”

The company has performed an investigation and identified what needs to be fixed in the engine to strengthen the components that failed. A second LauncherOne rocket is in final integration right now and will be leaving the factory in the next few weeks while modifications to the engine continue. “We’ll be targeting our next flight before the end of the year,” Hart said.

Up until the failure of the propellant line, the demo flight of the air-launch system was going well. “We succeeded in getting through our countdown and our launch seamlessly, really flawlessly, and dropped the rocket,” he said.

After release of LauncherOne from the company’s modified Boeing 747, Hart said data from the rocket verified the company’s aerodynamic modeling of how it handles, particularly as it transitioned from the turbulent airflow around the aircraft to the smoother flow beneath it. The systems that control the rocket’s fins worked as expected.

Ignition of the NewtonThree engine also went as planned, and the rocket then started to pitch up to travel on its planned trajectory. “We were pretty stoked at that point,” he said. “We had, at that moment, proven all of the new aspects of air launch.” However, he said the engine shut down just a few seconds later.

Despite failing to reach orbit, he said the launch was a major milestone for the company. “We left both incredibly excited and incredibly thrilled, and a bit disappointed that we didn’t get to orbit,” he said. The company had emphasized before the launch that roughly half of all first launches of new vehicles have failed, and that they hoped to at least get to the NewtonThree engine ignition on the first launch attempt.

Virgin Orbit is part of a crowded market of small launch vehicle developers seeking to capitalize on the interest in smallsats. Despite the strong competition, Hart said he continues to see strong interest in LauncherOne from government and commercial customers.

“We have a bunch of customers in the commercial sector who we’re working very closely with,” he said. “NASA will be a customer for us coming up very soon.” Virgin Orbit has a Venture Class Launch Services contract, originally awarded in 2015, for a launch of a group of cubesats that will be one of the first operational missions for LauncherOne.

VOX Space, the government services subsidiary of Virgin Orbit, was one of six companies originally identified by the Pentagon for launch contracts in June using authorities under the Defense Procurement Act to support the defense industrial base. The Defense Department later withdrew those awards, with officials saying earlier this month the funding set aside for the awards was needed instead for small business loan guarantees.