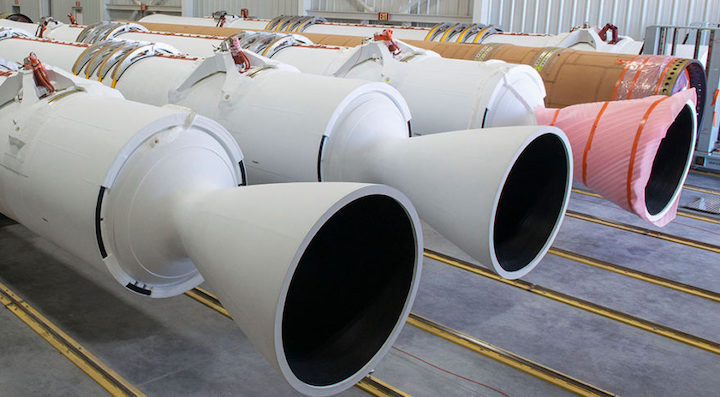 The GEM 63 rocket motors were developed under a cooperative agreement with ULA.

WASHINGTON — Northrop Grumman announced July 21 it has delivered three custom designed solid rocket motors that will fly later this year on United Launch Alliance’s Atlas 5 vehicle. The performance of these strap-on boosters on the Atlas 5 will serve as a preview for a larger version that Northrop Grumman is developing for ULA’s future launch vehicle Vulcan Centaur.

The three solid rockets are 63-inch diameter and 66-feet long graphite epoxy motors, known as GEM 63. They were shipped from Northrop Grumman’s facility in Magna, Utah, to Cape Canaveral Air Force Station in Florida. They will be used as strap-on boosters to augment thrust on Atlas 5 later this year in the launch of a National Reconnaissance Office satellite.

The GEM 63 rocket motors were developed under a cooperative agreement with ULA. Up to five motors can be strapped on an Atlas 5.

ULA plans to fly the GEM 63s on future Atlas 5 missions while Northrop Grumman completes the development of a larger GEM 63XL version for ULA’s Vulcan Centaur. The XL variant will be 72 feet tall.

A Northrop Grumman spokesperson said the GEM 63XL is “still in development and will undergo its first qualification test next month.”