Mars is an obvious source of inspiration for science fiction stories. It is familiar and well-studied, yet different and far enough away to compel otherworldly adventures. NASA has its sights on the Red Planet for many of the same reasons.

Robots, including the Perseverance rover launching soon to Mars, teach us about what it’s like on the surface. That intel helps inform future human missions to the Red Planet. We’ll also need to outfit spacecraft and astronauts with technologies to get them there, explore the surface, and safely return them home. The roundtrip mission, including time in transit – from and back to Earth – and on the Martian surface, will take about two years.

Technology development has already begun to enable a crewed Mars mission as early as the 2030s. Many of the capabilities will be demonstrated at the Moon first, during the Artemis missions, while other systems are more uniquely suited for deeper space. Here are six technologies NASA is working on to make Mars science fiction a reality.

NASA is advancing many technologies to send astronauts to Mars as early as the 2030s. Here are six things we are working on right now to make future human missions to the Red Planet possible.
Credits: NASA

1. Powerful propulsion systems to get us there (and home!) quicker

Astronauts bound for Mars will travel about 140 million miles into deep space. Advancements in propulsion capabilities are the key to reaching our destination as quickly and safely as possible.

It is too soon to say which propulsion system will take astronauts to Mars, but we know it needs to be nuclear-enabled to reduce travel time. NASA is advancing multiple options, including nuclear electric and nuclear thermal propulsion. Both use nuclear fission but are very different from each other. A nuclear electric rocket is more efficient, but it doesn’t generate a lot of thrust. Nuclear thermal propulsion, on the other hand, provides much more “oomph.”

Whichever system is selected, the fundamentals of nuclear propulsion will reduce the crew’s time away from Earth. The agency and its partners are developing, testing, and maturing critical components of various propulsion technologies to reduce the risk of the first human mission to Mars.

Illustration of a spacecraft with a nuclear-enabled propulsion system.
Credits: NASA

2. Inflatable heat shield to land astronauts on other planets

The largest rover we’ve landed on Mars is about the size of a car, and sending humans to Mars will require a much bigger spacecraft. New technologies will allow heavier spacecraft to enter the Martian atmosphere, approach the surface, and land close to where astronauts want to explore.

NASA is working on an inflatable heat shield that allows the large surface area to take up less space in a rocket than a rigid one. The technology could land spacecraft on any planet with an atmosphere. It would expand and inflate before it enters the Martian atmosphere to land cargo and astronauts safely.

The technology isn’t ready for the Red Planet just yet. An upcoming flight test of a 6-meter diameter (about 20-feet) prototype will demonstrate how the aeroshell performs as it enters Earth’s atmosphere. The test will prove it can survive the intense heat during entry at Mars. 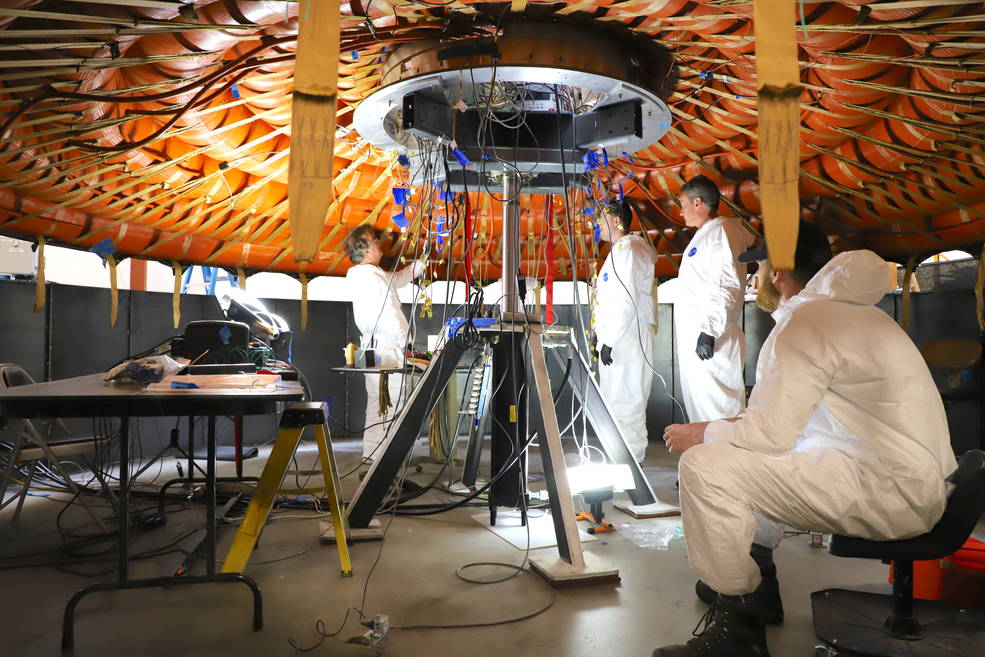 Engineers prepare for the flexible heat shield installation on the inflatable structure. The view is from bottom side, and the heat shield is on top.
Credits: NASA’s Langley Research Center

Spacesuits are essentially custom spacecraft for astronauts. NASA’s latest spacesuit is so high-tech, its modular design is engineered to be evolved for use anywhere in space.

The first woman and the next man on the Moon will wear NASA’s next-generation spacesuits called the exploration extravehicular mobility unit or xEMU. The spacesuits prioritize crew safety while also allowing Artemis Generation moonwalkers to make more natural, Earth-like movements and accomplish tasks that weren’t possible during the Apollo missions.

Future upgrades to address the differences on Mars may include technology for life support functionality in the carbon dioxide-rich atmosphere and modified outer garments to keep astronauts warm during the Martian winter and prevent overheating in the summer season.

NASA’s next-generation spacesuit is designed to give astronauts more mobility on the Moon and Mars.
Credits: NASA

4. Martian home and lab on wheels

To reduce the number of items needed to land on the surface, NASA will combine the first Martian home and vehicle into a single rover complete with breathable air.

NASA has conducted extensive rover testing on Earth to inform development of a pressurized mobile home on the Moon. Artemis astronauts who live and work in the future pressurized Moon rover will be able to offer feedback to help refine the rover capabilities for astronauts on Mars. NASA’s robotic rovers will help with the Martian design, too – everything from the best wheels for Mars to how a larger vehicle will navigate the tough terrain.

Much like an RV, the pressurized rover will have everything inside that astronauts need to live and work for weeks. They can drive in comfortable clothing, tens of miles from the spacecraft that will launch them back to space for the return trip to Earth. When they encounter interesting locations, astronauts can put on their high-tech spacesuits to exit the rover and collect samples and conduct science experiments. 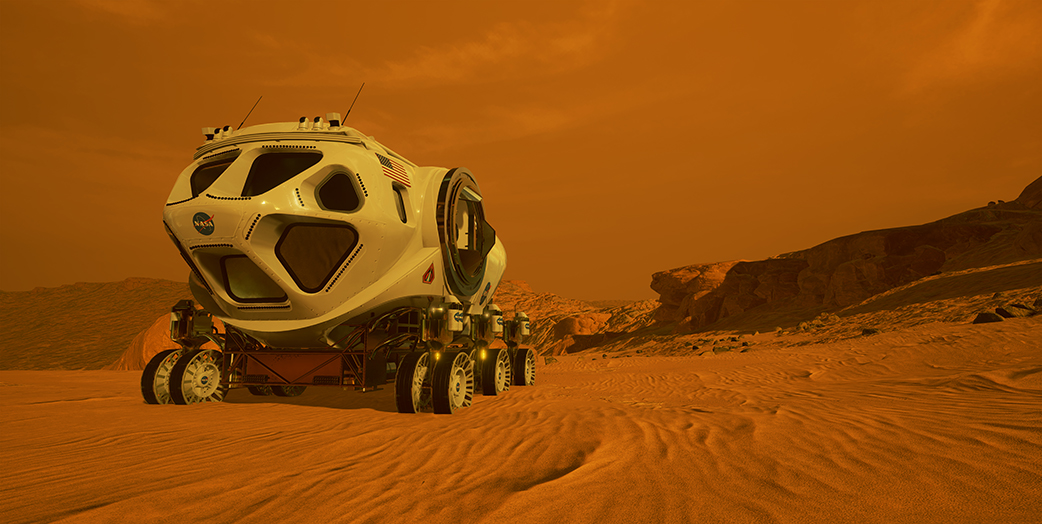 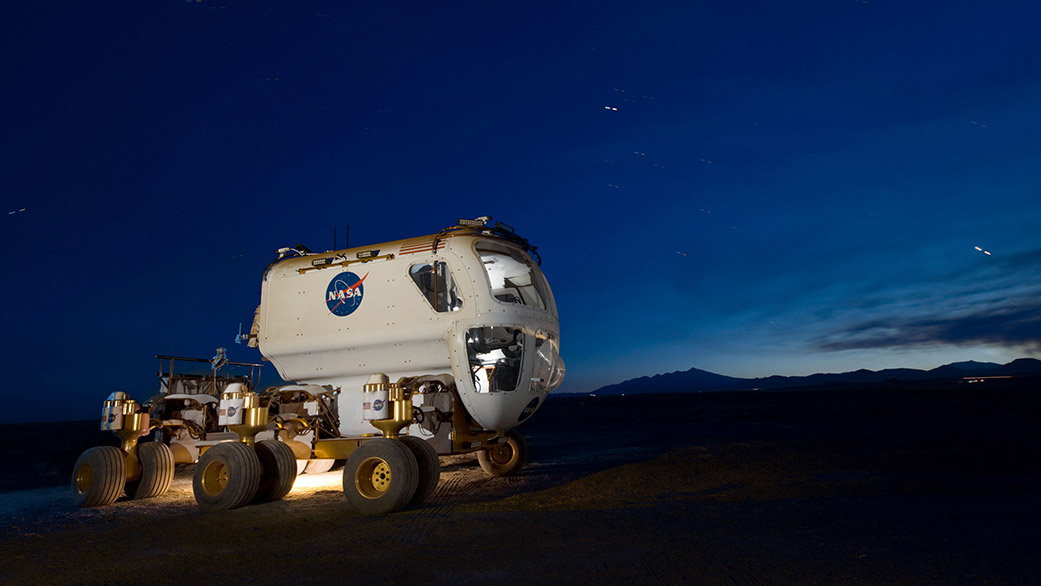 Show only LeftShow only Right
Left: Illustration of a pressurized rover on Mars. Right: NASA is currently working to on a vehicle that will be able to navigate tough terrain on the Red Planet.
Credits: NASA

Like we use electricity to charge our devices on Earth, astronauts will need a reliable power supply to explore Mars. The system will need to be lightweight and capable of running regardless of its location or the weather on the Red Planet.

Mars has a day and night cycle like Earth and periodic dust storms that can last for months, making nuclear fission power a more reliable option than solar power. NASA already tested the technology on Earth and demonstrated it is safe, efficient, and plentiful enough to enable long-duration surface missions. NASA plans to demonstrate and use the fission power system on the Moon first, then Mars. 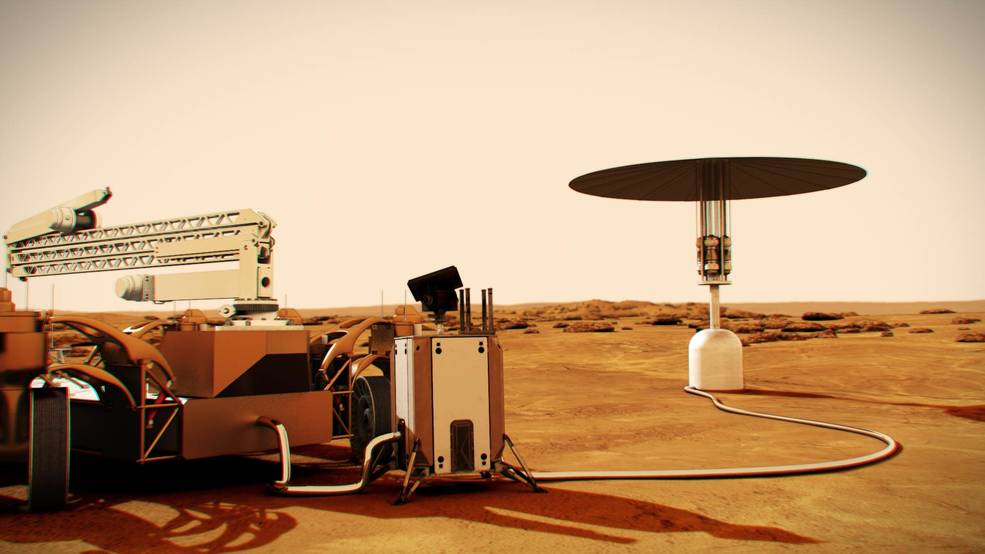 Human missions to Mars may use lasers to stay in touch with Earth. A laser communications system at Mars could send large amounts of real-time information and data, including high-definition images and video feeds.

Sending a map of Mars to Earth might take nine years with current radio systems, but as little as nine weeks with laser communications. The technology would also allow us to communicate with astronauts, to see and hear more of their adventures on the Red Planet.

NASA proved laser communications is possible with a demonstration from the Moon in 2013. The agency’s next demo will work through different operational scenarios, perfect the pointing system, and address technology challenges from low-Earth orbit – things like clouds and other communications disruptions. NASA is building small systems to test for human spaceflight, including on the International Space Station and the first crewed Artemis mission. Another laser communications payload will venture to deep space to help inform what it takes to use the same technology millions and millions of miles away from Earth.