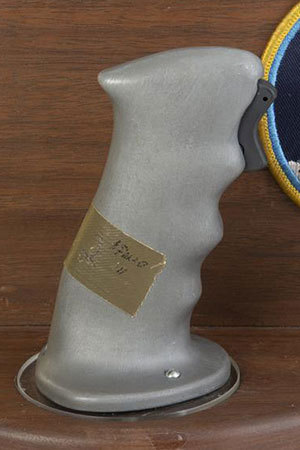 The rotation hand controller that was installed next to Neil Armstrong's couch on board the command module Columbia during the 1969 Apollo 11 lunar landing mission. (Julien's Auctions)

— Three joysticks used to fly the historic spacecraft that carried the first astronauts to land on the moon have sold for more than $780,000 — despite NASA having sought their return.

Two rotational attitude control sticks and a translation hand controller from the Apollo 11 command module, Columbia, were offered by Julien's Auctions of Beverly Hills on Saturday (July 18), 51 years after the first lunar landing mission. The artifacts were among a small collection of NASA memorabilia included in Julien's Hollywood: Legends and Explorers sale, which also featured a nearly complete spacesuit worn in Stanley Kubrick's 1968 film, "2001: A Space Odyssey" (the costume sold for $370,000).

"This event brings together both a fictional representation of our (then) future as well as a historic collection of some of the most important pieces used in space exploration including the actual pilot control stick used by Neil Armstrong on the Apollo 11 flight to the moon," Julien's wrote in its introduction to the sale.

The rotation control handle that had been installed near the right hand of Apollo 11 mission commander Neil Armstrong, the first astronaut to walk on the moon, topped the three lots at $370,000 (including the buyer's premium). A similar control stick that was positioned to the right of lunar module pilot Buzz Aldrin sold for $256,000. Both were used for making adjustments to the command module's roll, pitch, and yaw.

A T-handle translational control stick used by both Armstrong and command module pilot Michael Collins, which had been located to the left of Columbia's left couch, sold for $156,250. The stick was used when docking the spacecraft with the lunar module Eagle after departing Earth for the moon. The same handle, when turned counterclockwise, would have also been used by Armstrong to abort the mission had the crew encountered a significant problem during their launch.

Two unidentified buyers won the three lots, with the same bidder buying both the rotation and translation controllers that had been next to Armstrong's couch.

All three controllers were removed from the command module two months after it splashed down for presentation to the astronauts, but the crew reportedly refused the gifts. Instead, the handles — mounted to a custom wooden plaque with an embroidered Apollo 11 mission patch and a bright yellow NASA parts tag — were stored away in an office safe at Johnson Space Center in Houston for more than 15 years.

Bill Whipkey, then-head of the center's machine shop, rediscovered the handles while preparing to retire from NASA.

"According to the former NASA employee who managed the safe, prior to his retirement in 1985, he asked his supervisor what to do with the controllers and was told to throw them out; however, he instead took the three controllers home," NASA's Office of Inspector General (OIG) wrote in a 2018 audit of the space agency's historic property. "Years later, the former employee sold the controllers at auction to a collector of space memorabilia."

In 2013, the translation hand controller that had been installed next to Aldrin's seat was offered by RR Auction of Boston, but was pulled after NASA requested time to look into its ownership.

"When NASA learned of the sale, it sought return of the controllers to replace the mockup controllers that were on display at the Smithsonian National Air and Space Museum," the OIG wrote.

The National Air and Space Museum has exhibited the Apollo 11 command module since receiving it from NASA in 1971. According to the Inspector General, officials at NASA Headquarters in Washington, D.C. pressed for the return of the hand controllers.

"Apart from pursuing legal action to recover an artifact, NASA can also ask the current owner to voluntarily return the property to NASA or request the artifact be donated to a museum with a provision that the individual or family be mentioned in the display or provided other compensation," the OIG report explains. "NASA has experienced limited success recovering property via these options."

After 3 years, NASA ceased its pursuit of the Apollo 11 hand controllers. The OIG did not say if the agency then relinquished its title, or if in the future it might seek return of the control handles again. An inquiry to the OIG was referred to NASA's general counsel, who was unavailable to comment in time for this article.

The hand controllers are not the only parts of the Apollo 11 command module that NASA has sought to recover after they emerged for sale. In 2000, the OIG investigated the auction of an exterior-mounted EVA (extravehicular activity, or spacewalk) handrail that was removed from Columbia post-flight due to the presence of radioactive material. The metal rail sold for $34,500 and remains in a private collection today.

Had the Apollo 11 crew accepted receipt of the hand controllers, a 2012 law would have protected their option to sell the artifacts without further NASA inquiry. The legislation, which reasserts the Apollo-era astronauts' title to the flown spacecraft hardware they retained or were presented after their missions, only applies to the crew members and not other NASA employees.

In addition to taking home the Apollo 11 control sticks, Whipkey also retained a translation control handle from the Apollo 9 spacecraft. After being contacted by the OIG, he returned that handle to NASA and it was subsequently transferred to the Smithsonian to be included in an existing display. 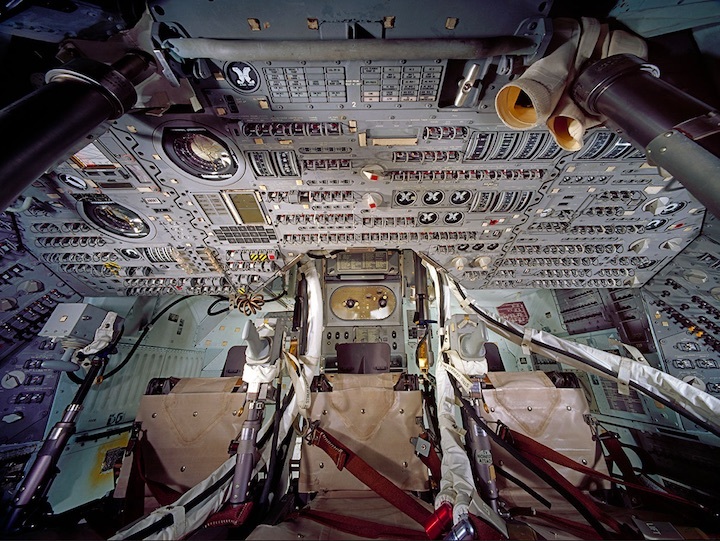 View inside the Apollo 11 command module Columbia with replica hand controllers installed in place of the real equipment, which was sold on July 18, 2020 by Julien's Auctions. (Smithsonian)