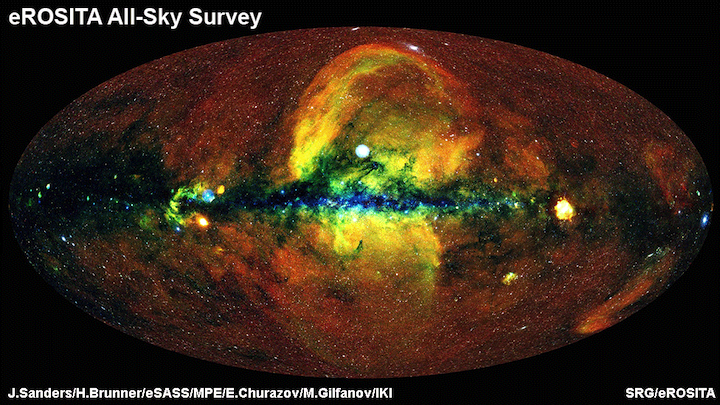 A German-Russian space telescope has just acquired a breakthrough map of the sky that traces the heavens in X-rays.

The image records a lot of the violent action in the cosmos - instances where matter is being accelerated, heated and shredded.

The data comes from the eRosita instrument mounted on Spektr-RG.

This orbiting telescope was launched in July last year and despatched to an observing position some 1.5 million km from Earth. Once commissioned and declared fully operational in December, it was left to slowly rotate and scan the depths of space.

eRosita's first all-sky data-set, represented in the image at the top of this page, was completed only last week. It records over a million sources of X-rays.

"That's actually pretty much the same number as had been detected in the whole history of X-ray astronomy going back 60 years. We've basically doubled the known sources in just six months," said Kirpal Nandra, who heads the high-energy astrophysics group at the Max Planck Institute for Extraterrestrial Physics (MPE) in Garching, Germany.

"The data is truly stunning and I think what we're doing here will revolutionise X-ray astronomy," he told BBC News.

The map uses the so-called Aitoff projection, which unwraps the sphere of the sky on to an ellipse. The band across the middle is the plane of our Milky Way Galaxy, with the centre of the galaxy in the middle of the ellipse.

Much of the galaxy's plane is dominated by highly energetic sources. In part, that's because copious amounts of gas and dust have absorbed and filtered out the lower energy radiation. Sources include stars with strong, magnetically active and extremely hot atmospheres.

The greens and yellows that draw a kind of mushroom feature covering a great swathe of the map represent hot gas inside and just outside our galaxy. This material imprints information about the formation and evolution of the Milky Way.

Some of the bigger splodges are well known actors on the sky. The bright yellow patch just above the plane on the far right is a concentration of supernova remnants - the wreckage of stars that have exploded and whose shockwaves have super-heated a surrounding cocoon of dust and gas. This particular patch is dominated by the Vela supernova remnant. This was an explosion that happened thousands of years ago but a mere 800 light-years from Earth.

Look next at the diffuse red glow at the top and bottom of the map. This is largely X-ray emission from hot gas well beyond our galaxy. And in the white speckles, we are seeing principally the signature of super-massive black holes. Indeed, about 80% of all the sources contained in the new map are the gargantuan black holes that reside at the centres of distant galaxies. They pump out X-rays as their immense gravitational pull draws in and eviscerates matter.

Some of super-massive black holes making an appearance in the map are seen when the Universe was younger than one billion years old, less than 10% of its present age.

Spektr-RG and its eRosita instrument intend to gather seven more all-sky surveys over the next 3.5 years. This will enable the telescope to refine its data, to remove artefacts and noise, but also to sense deeper into the cosmos and pick up the faint sources that would otherwise be beyond detection.

One key goal is to map the distribution of the hot, X-ray-emitting gas that illuminates the great clusters of galaxies.

Astronomers hope this information can lead them to some fresh insights on how the Universe is structured and how it has changed through time. It's possible there may be some clues in this project about the nature of dark energy, the mysterious "force" that appears to be pushing the cosmos apart at an ever accelerating rate.

"That's the big prize, but it would only come at the end of the mission," explained Prof Nandra.

"Eight surveys allows us to go really deep into the distant Universe. Basically, we're trying to detect all of the clusters of galaxies in the Universe above a certain mass limit. We've got a nice sample already - maybe around 10,000. But we're hoping to get at least 100,000 clusters of galaxies."

eRosita is the German element on Spektr-RG. It takes up most of the room on the spacecraft bus, or chassis. But it sits next to a Russian instrument known as ART-XC, which is sensitive to higher energies, up to 30 keV.

Both eRosita and ART-XC use a cluster of seven tubular mirror modules to corral X-ray light down on to their sensitive camera detectors.