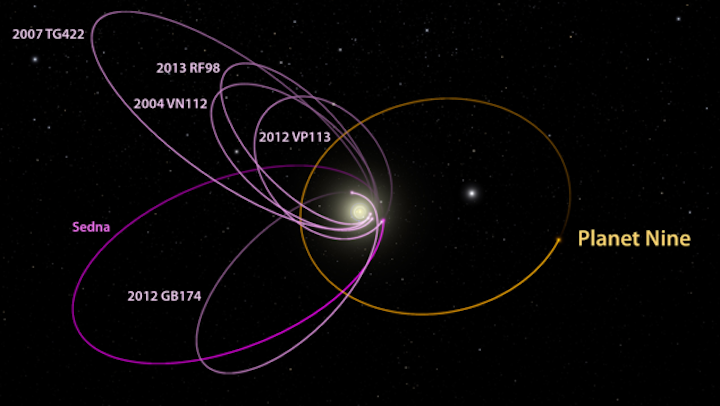 Gravitational pull: the six most distant known objects in the Solar System with orbits exclusively beyond Neptune (magenta) all mysteriously line up in a single direction. Also, when viewed in 3D, they tilt nearly identically away from the plane of the Solar System. Caltech’s Konstantin Batygin and Mike Brown have shown that a planet with 10 times the mass of the Earth in a distant eccentric orbit anti-aligned with the other six objects (orange) is required to maintain this configuration. (Courtesy: Caltech/R. Hurt (IPAC))

Orbits of these KBOs suggest that a body a few times more massive than the Earth currently resides about 500 AU from the Sun towards the constellation Orion. Searches for Planet Nine have come up empty – but this is no surprise because at that distance, even a large and reflective planet would be barely detectable with the kind of wide-field-of-view telescopes used for large-area surveys.

This lack of detection has led some to speculate that Planet Nine is not a planet but a black hole smaller than your fist. Though improbable, this was suggested in 2019 by Jakub Scholtz at the UK’s Durham University and James Unwin at the University of Chicago in the US. They argue that gravitational field that perturbs those KBOs’ orbits could originate from a primordial black hole captured by the Sun billions of years ago.

While such an object would be impossible to spot with telescopes, it might, says Edward Witten of Princeton University in the US, be revealed by a more aggressive search. In a paperposted on the arXiv preprint server, he suggests that a few-Earth-mass black hole could be detected by launching a fleet of hundreds or thousands of lightweight probes towards the object.

His proposal is a more modest version of the Breakthrough Starshot project, which aims to send ultralight (about 1 g) probes on a 20-year journey to the nearby star Alpha Centauri using an earthbound laser array to boost the spacecraft to 20% of the speed of light (0.2c). Using a similar system, Witten reckons a 10-year journey to 500 AU could be achieved at 0.001c with much larger spacecraft (about 100 g) — necessitating a less daunting feat of miniaturization. This is still 20 times the speed of NASA’s New Horizons Pluto probe.

By scattering a host of such probes in the general direction of the hypothetical black hole, a lucky few might pass within tens of AU of the object, accelerating slightly as they did so. If the probes send regular, timed signals back to Earth, the gravitational field of the black hole would cause a lengthening of the interval between pulses.

Witten calculates that to detect the black hole using this scheme, the probes’ timing measurements would need to be accurate to about 10-5 s over the course of a year. This is well within the abilities of existing atomic clocks, but it is hard to imagine how such devices could be squeezed into 100 g spacecraft.

“It is far from clear that this approach is practical, or that it is the best way even if it is practical,” admits Witten.

In response to Witten’s proposal, Scott Lawrence and Zeeve Rogoszinski, at the University of Maryland in the US developed an alternative approach, which they have described on arXiv. It does away with the need for onboard timing systems and instead relies on detecting transverse deflections of the probes’ trajectories caused by the black hole.

Whereas the accelerations in Witten’s scheme act only while the probes are near to the black hole, sideways displacements like those considered by Lawrence and Rogoszinski are permanent and build up over time. A 1000 km displacement would take several years to accumulate and at a distance of 500 AU, the duo calculate it would be detectable from Earth using very-long-baseline interferometry at high radio frequencies. Although this approach sidesteps the need for spaceborne atomic clocks, getting the probes to transmit or even just reflect such signals would be a significant challenge.

And still it might all be for nothing. In yet another contribution on arXiv, Thiem Hoang, at the Korea Astronomy and Space Science Institute and  Abraham Loeb at Harvard University in the US, point out that both proposals treat the spacecraft as being subject only to gravity. In reality, drag and electromagnetic forces from the uneven interstellar medium would also perturb the probes’ trajectories, overwhelming the signal from the black hole.

Astronomer Mike Brown, at Caltech in the US, who with Konstantin Batygin predicted the existence of Planet Nine from the orbits of KBOs, finds the proposals interesting but ultimately unnecessary.

“I generally love these ideas, but there is zero reason to think that Planet Nine is a black hole,” says Brown. “We’re still looking hard. If we don’t find Planet Nine in any of the dedicated searches, I suspect it will turn up pretty quickly in LSST [the Large Synoptic Survey Telescope, now called the Vera C Rubin Observatory], though now I don’t know for sure when that will happen.”

Astronomie - If ‘Planet Nine’ is a primordial black hole, could we detect it with a fleet of tiny spacecraft?
608 Views
Created with page4