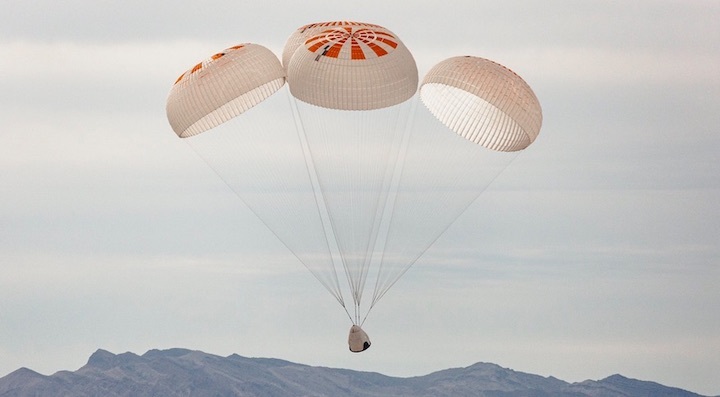 WASHINGTON — SpaceX said March 24 that one of the final parachute tests for its Crew Dragon spacecraft went awry, a problem it blamed on the test setup and not a flaw with the parachutes themselves.

In a statement, SpaceX said that it attempted to perform a parachute test by dropping a test article from a helicopter. The company didn’t describe the test article, but in some past tests it has used a mockup of a Crew Dragon spacecraft.

The test article, though, became unstable as the helicopter ascended. “Out of an abundance of caution and to keep the helicopter crew safe, the pilot pulled the emergency release,” SpaceX said.

While SpaceX had suffered problems with parachute tests in the past, including a test failure in April 2019, the company said the parachutes were not at fault in this test since they were never activated. “While the test article was lost, this was not a failure of the parachute system,” the company argued.

Before this incident, the company had reported a string of successes of a new Mark 3 parachute design intended to improve their safety. In December, SpaceX announced it had performed 10 successful consecutive “multi-chute” tests of the Mark 3 design, a milestone NASA and SpaceX had said in October it hoped to achieve by the end of the year.

During a press conference at the Kennedy Space Center March 6 before the launch of a cargo Dragon mission, Hans Koenigsmann, vice president of build and flight reliability at SpaceX, said that the company was “almost done” with Crew Dragon parachute testing.

“We agreed to three more tests, and one of them was actually performed two days ago, so we have two more tests to perform,” he said. The emphasis for those tests was “corner cases” that stress the parachutes.

“We have an enormously large test series behind us,” he said. “We turned something that was a concern a while back into a very successful test program.”

SpaceX did not disclose in its statement if this incident involved the first or second of the two remaining tests that Koenigsmann referred to, and how it would affect final preparations for the Demo-2 Crew Dragon mission. That flight, currently scheduled for mid-to-late May, will send NASA astronauts Bob Behnken and Doug Hurley to the International Space Station and mark the first crewed orbital flight from U.S. soil since the retirement of the space shuttle in 2011.

“NASA and SpaceX are working together to determine the testing plan going forward in advance of Crew Dragon’s second demonstration mission,” the company said.

NASA said earlier March 24 that it would have representatives from the commercial crew program on SpaceX’s investigation into a premature engine shutdown during a Falcon 9 launch March 18. The agency said it was still planning on a May launch of the Demo-2 mission, but “would adjust the date based on review of the data, if appropriate” from that investigation.