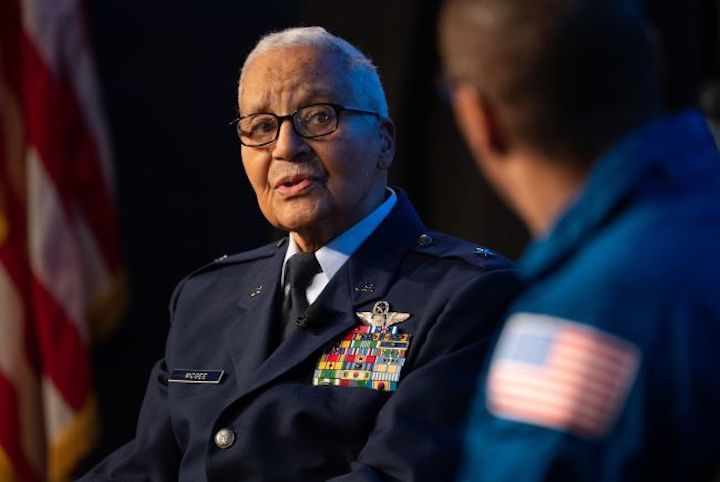 A 100-year-old Tuskegee Airman made a special visit to NASA Headquarters in Washington on Wednesday (Feb. 5), the day after he was cited in President Donald Trump's State of the Union address.

Brig. Gen. Charles McGee — who served in the Second World War, the Korean War and the Vietnam War — spoke in front of a packed auditorium about his experience in the Air Force as one of the first African American military pilots to serve in combat.

But he also made allusions to the adversity that he and his fellow airmen faced during the early days of the Second World War, when African Americans encountered discrimination and segregation — even in the theater of war. Trump also alluded to this discrimination in his address.

"After more than 130 combat missions in World War II, he came back home to a country still struggling for civil rights and went on to serve America in Korea and Vietnam," Trump said during his State of the Union speech. "A few weeks ago," Trump added, "I signed a bill promoting Charles McGee to brigadier general. And earlier today, I pinned the stars on his shoulders in the Oval Office. General McGee, our nation salutes you. Thank you, sir."

McGee was part of the 332nd Fighter Group, which saw action in Italy protecting bombers, among other adventures — but the group preceding him had a larger challenge, he explained at the NASA event. That group, called the 99th Pursuit Squadron, had to wait an extra three months for assignment because "no white commander would take them," he explained.

When they finally got overseas, the 99th was assigned to a zone in northern Africa that was far from the real action. Complaints came in that the group, operating in Liberia, had shot down only one German airplane during its first few forays.

"Do you know your history?" McGee said, pointing out, as the audience laughed, that most Germans were not in Liberia at that time. Eventually, the 99th were reassigned to something a bit more central to the war-fighting action, he added, but challenges remained. McGee recalled that African American airmen were segregated from their white colleagues, to fall in line with the legislation back home.

It wasn't until 1948, three years after the Second World War ended, that President Harry Truman signed an executive order forbidding military discrimination "on the basis of race, color, religion or national origin," which was the first step to abolishing segregation in U.S. armed services. Approved segregation in everyday life, however, persisted long into the 1960s. And African Americans continue to face discrimination today.

Joining McGee on stage was African American astronaut Alvin Drew, who flew on the space shuttle twice during missions STS-118 in 2007 and STS-133 in 2011. Drew asked McGee about the airman's life and thanked him for his service. "I personally thank you for making an opportunity for me," said Drew, who has logged 632 hours in space.

To date, Drew is the last African American to visit the International Space Station, NASA said during the broadcast. Jeanette Epps, who is also African American, was supposed to visit the ISS in 2018, but she was removed from the flight crewa few months before her scheduled launch. Epps later said she was not informed of the reasons for this decision but added that she did not feel it was because of racism or sexism.

McGee loved flying right from his first lesson, he said in the livestreamed event on YouTube. "When I got called ... for that first ride, I was hooked," he said. "I loved flying, and to be able to get off the ground and do a loop roll and spin and put your feet on the ground again, that's for me."