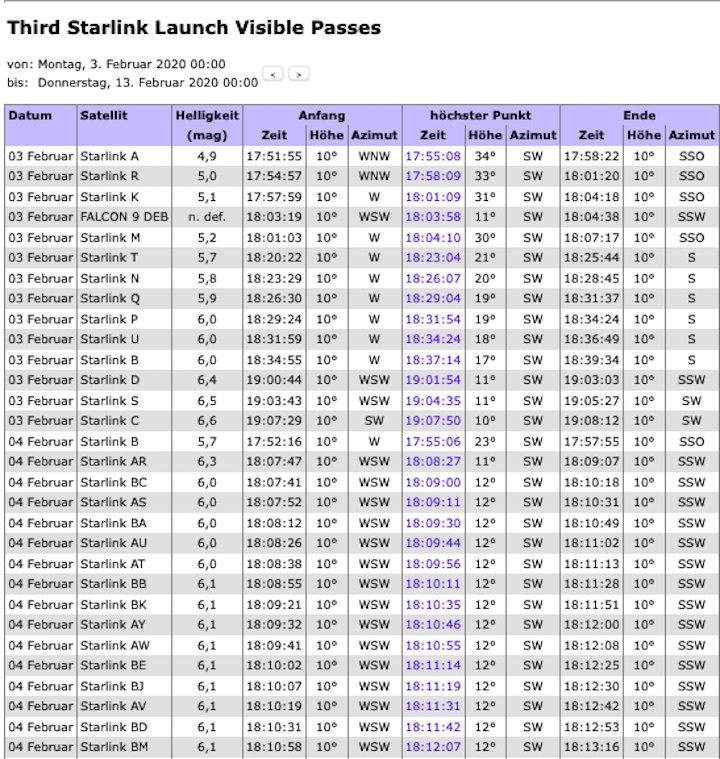 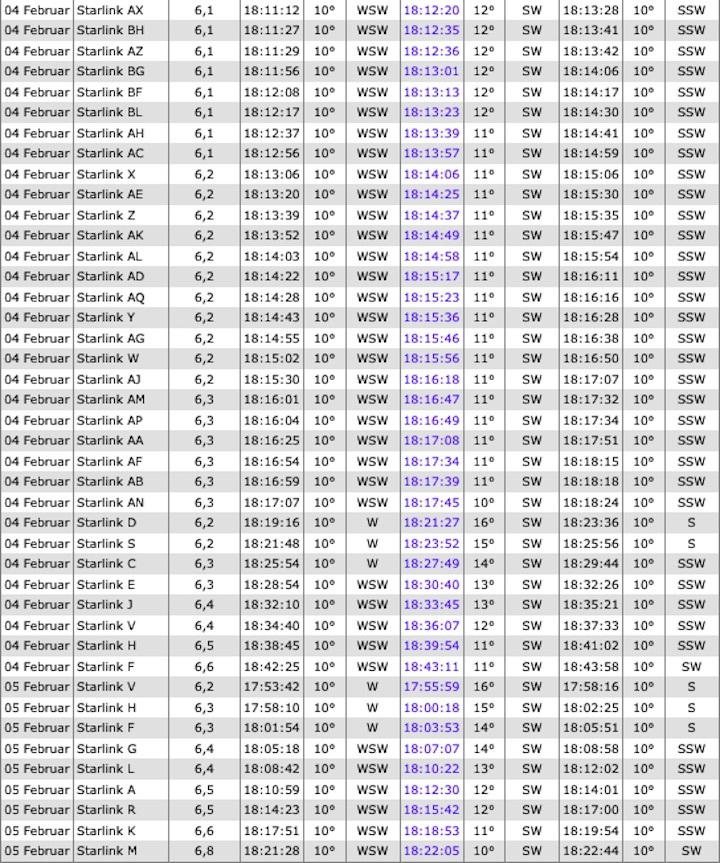 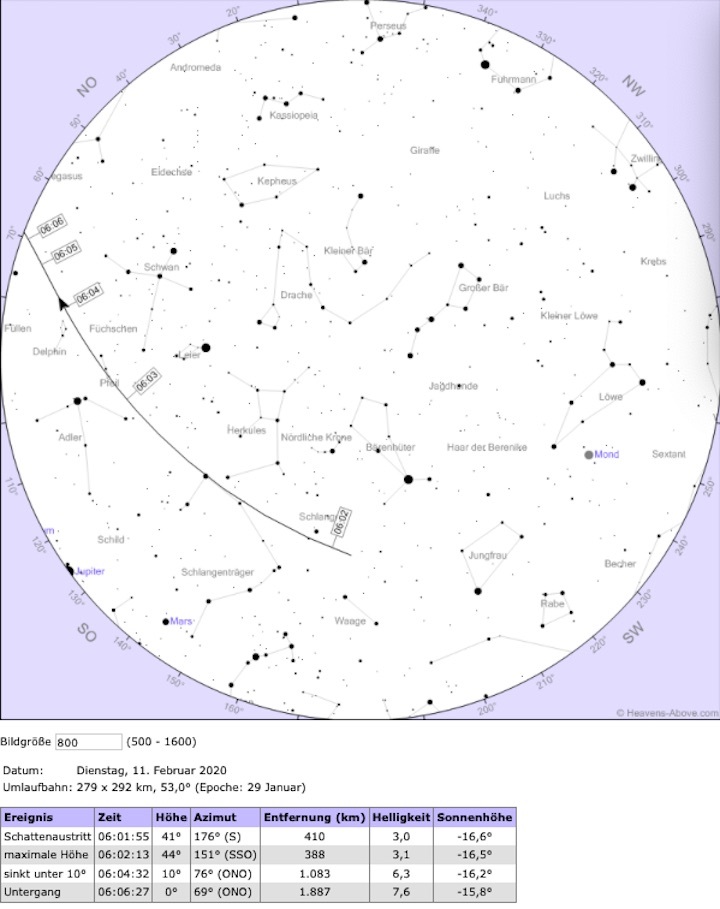 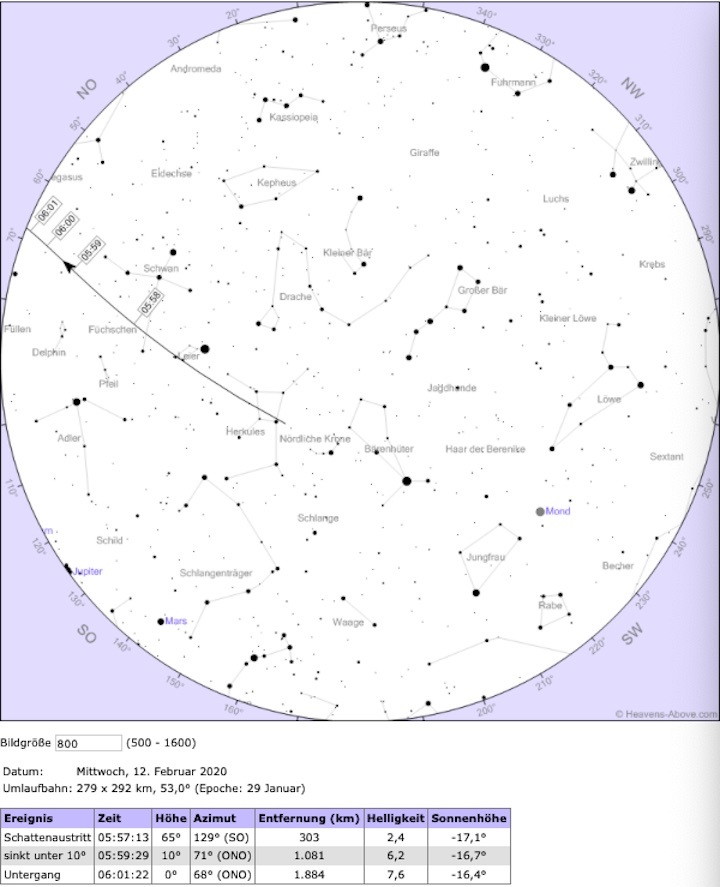 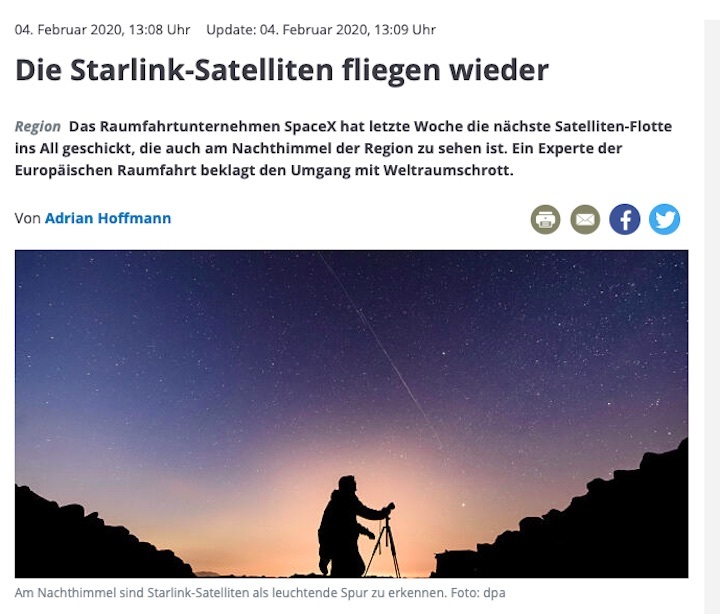 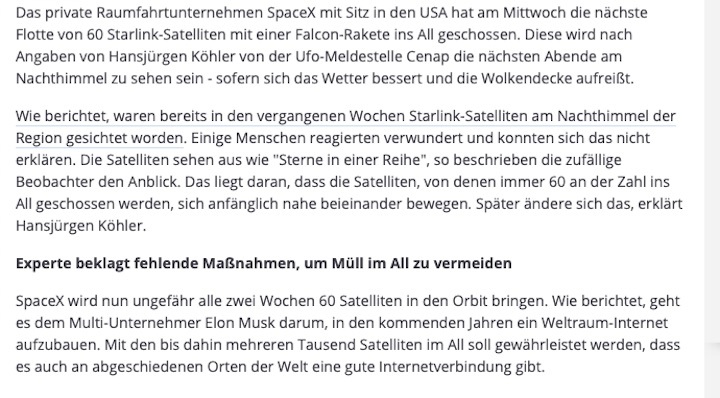 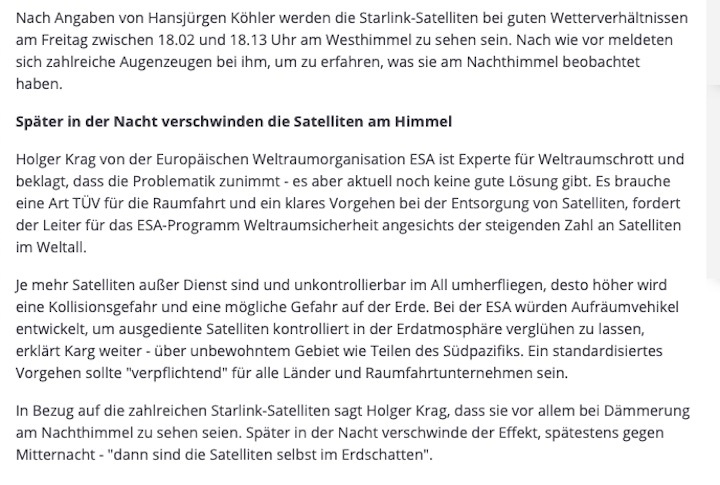 The Night Sky Will Never Be the Same 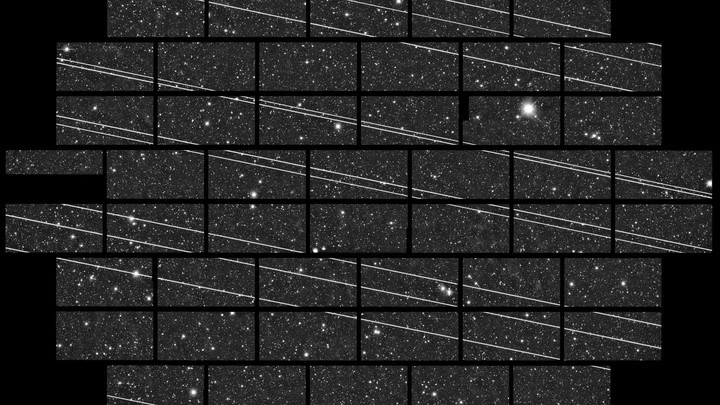 Last year, Krzysztof Stanek got a letter from one of his neighbors. The neighbor wanted to build a shed two feet taller than local regulations allowed, and the city required him to notify nearby residents. Neighbors, the notice said, could object to the construction. No one did, and the shed went up.

Stanek, an astronomer at Ohio State University, told me this story not because he thinks other people will care about the specific construction codes of Columbus, Ohio, but rather because it reminds him of the network of satellites SpaceX is building in the space around Earth.

“Somebody puts up a shed that might obstruct my view by a foot, I can protest,” Stanek said. “But somebody can launch thousands of satellites in the sky and there’s nothing I can do? As a citizen of Earth, I was like, Wait a minute.”

Since last spring, SpaceX has launched into orbit dozens of small satellites—the beginnings of Starlink, a floating scaffold that the company’s founder, Elon Musk, hopes will someday provide high-speed internet to every part of the world.

SpaceX sent a letter too, in a way. After filing for permission to build its constellation in space, federal regulators held the required comment period, open to the public, before the first satellites could launch.

These satellites have turned out to be far more reflective than anyone, even SpaceX engineers, expected. Before Starlink, there were about 200 objects in orbit around Earth that could be seen with the unaided eye. In less than a year, SpaceX has added another 240. “These are brighter than probably 99 percent of existing objects in Earth orbit right now,” says Pat Seitzer, a professor emeritus at the University of Michigan who studies orbital debris.

For months, astronomers have shared images online of their telescopes’ fields of view with diagonal white streaks cutting across the darkness, the distinct appearance of Starlink satellites. More satellites are now on the way, both from SpaceX and other companies. If these satellites end up numbering in the tens of thousands, ignoring them would be difficult, whether you’re an astronomer or not.

In some ways, these satellites pose a familiar problem, a matter of managing the competing interests that scientists, commercial companies, and the public might have in a limited natural resource. But the use of outer space—particularly the part in close vicinity to our planet—has never been tested quite like this before. For most of history, scientists, particularly those who observe the cosmos on visible wavelengths, have had relatively little competition for access to the sky. Passing satellites were considered nuisances and sometimes wrecked data, but they were rare. Some astronomers are now calling for legal action, but even those who wouldn’t push that far describe Starlink’s satellites as a wake-up call: What happens when new and powerful neighbors have a distinct—and potentially disruptive—plan for a place you value?

For Harvey Liszt, the case of the Starlink satellites feels like déjà vu.

Liszt specializes in radio astronomy, a field that has experienced more than its share of satellite-related headaches. The first GPS satellites, launched in the late 1970s, spewed signals across the radio spectrum, including the bands that astronomers like Liszt use to scan the universe, and interfered with their observations. “Without very strict regulation, it’s all too easy for users of the radio spectrum to spill over into each other’s spectrum,” Liszt says.

So astronomers started pushing regulators to bring GPS technology in line. The United States has controlled use of the radio spectrum since the early 20th century, when it became clear that too much noise could garble emergency messages from ships in distress and other long-distance cries for help. The International Telecommunication Union, which coordinates global use of the radio spectrum, had been established decades earlier, in 1865. By the time radio astronomers had to worry about GPS satellites, the idea that satellite operators had to play by oversight rules was well understood.

Before Starlink launched, SpaceX coordinated with the National Science Foundation and its radio-astronomy observatories to make sure there wouldn’t be any overlap. Unfortunately for optical astronomers, there is no such framework when it comes to the brightness of satellites—no international body in Geneva, let alone a dedicated agency in the United States. The Federal Communications Commission’s regulatory realm spans communication networks across multiple industries, which means its oversight includes, oddly enough, both satellites and offensive Super Bowl commercials. But while American satellites need the agency’s permission to launch, the FCC does not regulate the appearance of those satellites once they’re in orbit.

From the ground, Starlink satellites appear as points of light moving from west to east, like a string of tiny pearls across the dark sky. (Some people have even mistaken them for UFOs.) The satellites are at their brightest after launch, before they spread out and rise in altitude, and are visible even in the middle of cities. They appear dimmer after a few months, when they reach their final orbit, about 342 miles (550 kilometers) up, but even then they can still be seen in darker areas, away from the glare of light pollution.

In the months since they first launched, the Starlink satellites have been essentially photobombing ground-based telescopes. Their reflectiveness can saturate detectors, overwhelming them, which can ruin frames and leave ghost imprints on others. Vivienne Baldassare’s work depends on comparing images taken night after night and looking for nearly imperceptible variations in light; the slightest shifts could reveal the existence of a black hole at the center of a glittering, distant galaxy. Baldassare, an astronomer at Yale, can’t see behind the streak of a satellite. “You can’t just subtract that off,” she says. Some objects, such as comets, are better viewed during dawn and dusk, when there’s just enough sunlight to illuminate them. But because they orbit close to Earth, the Starlink satellites can be seen during these hours, too; imagine missing a comet as it passes uncomfortably close to Earth because of too many satellites.

SpaceX is “actively working with leading astronomy groups from around the world to make sure their work isn’t affected,” says the company’s spokesperson, James Gleeson. To that end, one satellite in a batch of 60 launched in early January with experimental coating that might make it less reflective. Engineers won’t know how well it worked until the satellite reaches its final orbit.

As it waits for those data, SpaceX has continued to launch dozens of the original satellites. The company wants to deploy more than 1,500 satellites in 2020 alone, which means launches could come every few weeks. On top of those, the company OneWeb is scheduled to launch a batch of its own internet satellites this week; the proposed constellation of about 650 will fly at higher altitudes, which might have the paradoxical effect of being too dim to see from the ground but bright enough for telescopes to spot well into the night. And Jeff Bezos’s Amazon has asked the FCC for permission to someday launch a network of 3,200 internet satellites. In a few years’ time, three companies alone might transform the space around Earth, with SpaceX leading the pack.

Some astronomers say that SpaceX should stop launching Starlink satellites until engineers find a fix for their brightness, while others, including Seitzer—who is working with SpaceX engineers—say the optical-astronomy community could probably live with about 1,500 of them. Well beyond that, dodging bright satellites and capturing good, unblemished data would become harder.

“We can’t wait for the regulations, for new rules to be drafted, for the comment periods,” Seitzer says. “We have to work with the companies right now to try to convince them of the value of making their satellites as faint as possible.”

The FCC has approved the launch of 12,000 Starlink satellites so far, and SpaceX wants to launch 30,000 more. (The agency did not respond to questions about whether it should be responsible for controlling the brightness of satellites.) By the end of this year, the company’s operational satellites in orbit could outnumber all other satellites combined. That would be a tremendous, wholesale change to the night sky; one company in one country would have made an immense impact on a borderless piece of nature that everyone on Earth can access. But when SpaceX filled out its application to the FCC, it marked “No” on a question asking whether the project would have “a significant environmental impact”—which meant there was no review of the satellites’ potential effects. Perhaps the surprisingly bright appearance of the Starlink satellites in the night sky, which astronomers could argue counts as an environmental impact, could have been known before launch.

It might seem easy to wave away astronomers’ concerns as the hand-wringing of a small group. A couple hundred shiny satellites have little to no bearing on the daily lives of most people, who already can’t see the night sky as it truly is, because of artificial-light pollution. Aside from coordinating with commercial companies directly, it’s unclear what astronomers can do either. They doubt that average citizens are going to call their congressperson about Starlink satellites. They could sue the FCC and perhaps force the agency to consider environmental reviews, as the American Bird Conservancy did when it became apparent that the lights on communication towers could disorient migratory birds. As Jessica Rosenworcel, an FCC commissioner, saidherself last year, when the agency approved the Starlink constellation: “This rush to develop new space opportunities requires new rules. Despite the revolutionary activity in our atmosphere, the regulatory frameworks we rely on to shape these efforts are dated.”

Stanek’s point, illustrated by his neighbor’s shed, is that mega-constellations alter the aesthetics and value of the night sky in an unavoidable way. “We can’t opt out,” he said. “If I get sick and tired of living in Columbus, Ohio, I could move out to a remote cabin and disconnect from the internet. But here, everybody on the entire Earth that ever wants to look at the sky has to look at the Starlink satellites.” Obviously not everyone can pick up and relocate to the woods to experience the unobscured beauty of the sky. But there still are, for now, places where you’d expect not to see artificial stars passing overhead.