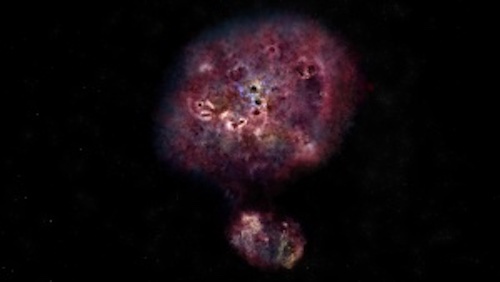 Maunakea, Hawaii – An international team of astronomers led by scientists at the University of California, Riverside, has found an unusual monster galaxy that existed about 12 billion years ago, when the universe was only 1.8 billion years old, or just 13 percent of its current age of 13.8 billion years.

Using W. M. Keck Observatory on Maunakea in Hawaii, the team found that the galaxy, dubbed XMM-2599, formed stars at a high rate and then died. Why it suddenly stopped forming stars is unclear.

The study published today in The Astrophysical Journal.

“It’s exciting to see one of our most in-demand instruments successfully characterize such a rare, ancient galaxy with a short life span,” said co-author Percy Gomez, an astronomer at Keck Observatory. “It took many hours-long observations, some as much as nine hours each, to determine XMM-2599’s distance and mass. It’s fulfilling to be a part of a team that continues pushing Keck and MOSFIRE to probe deeper into the mysteries about the origins of massive galaxies and protoclusters.”

“In this epoch, very few galaxies have stopped forming stars, and none are as massive as XMM-2599,” said Gillian Wilson, a professor of physics and astronomy at UCR in whose lab Forrest works.  “The mere existence of ultramassive galaxies like XMM-2599 proves quite a challenge to numerical models. Even though such massive galaxies are incredibly rare at this epoch, the models do predict them. The predicted galaxies, however, are expected to be actively forming stars. What makes XMM-2599 so interesting, unusual, and surprising is that it is no longer forming stars, perhaps because it stopped getting fuel or its black hole began to turn on. Our results call for changes in how models turn off star formation in early galaxies.”

The research team found XMM-2599 formed more than 1,000 solar masses a year in stars at its peak of activity — an extremely high rate of star formation. In contrast, the Milky Way forms about one new star a year.

“XMM-2599 may be a descendant of a population of highly star-forming dusty galaxies in the very early universe that new infrared telescopes have recently discovered,” said Danilo Marchesini, an associate professor of astronomy at Tufts University and a co-author on the study.

The evolutionary pathway of XMM-2599 is unclear.

“We have caught XMM-2599 in its inactive phase,” Wilson said. “We do not know what it will turn into by the present day. We know it cannot lose mass. An interesting question is what happens around it. As time goes by, could it gravitationally attract nearby star-forming galaxies and become a bright city of galaxies?”

Co-author Michael Cooper, a professor of astronomy at UC Irvine, said this outcome is a strong possibility.

“Perhaps during the following 11.7 billion years of cosmic history, XMM-2599 will become the central member of one of the brightest and most massive clusters of galaxies in the local universe,” he said. “Alternatively, it could continue to exist in isolation. Or we could have a scenario that lies between these two outcomes.”

The team has been awarded more time at the Keck Observatory to follow up on unanswered questions prompted by XMM-2599.

“We identified XMM-2599 as an interesting candidate with imaging alone,” said co-author Marianna Annunziatella, a postdoctoral researcher at Tufts University. “We used Keck to better characterize and confirm its nature and help us understand how monster galaxies form and die. MOSFIRE is one of the most efficient and effective instruments in the world for conducting this type of research.”

The study was supported by grants from the National Science Foundation and NASA.

The Multi-Object Spectrograph for Infrared Exploration (MOSFIRE), gathers thousands of spectra from objects spanning a variety of distances, environments and physical conditions. What makes this large, vacuum-cryogenic instrument unique is its ability to select up to 46 individual objects in the field of view and then record the infrared spectrum of all 46 objects simultaneously. When a new field is selected, a robotic mechanism inside the vacuum chamber reconfigures the distribution of tiny slits in the focal plane in under six minutes. Eight years in the making with First Light in 2012, MOSFIRE’s early performance results range from the discovery of ultra-cool, nearby substellar mass objects, to the detection of oxygen in young galaxies only two billion years after the Big Bang. MOSFIRE was made possible by funding provided by the National Science Foundation. It is currently one of the most in-demand instruments at Keck Observatory.

The W. M. Keck Observatory telescopes are among the most scientifically productive on Earth. The two, 10-meter optical/infrared telescopes on the summit of Maunakea on the Island of Hawaii feature a suite of advanced instruments including imagers, multi-object spectrographs, high-resolution spectrographs, integral-field spectrometers, and world-leading laser guide star adaptive optics systems.