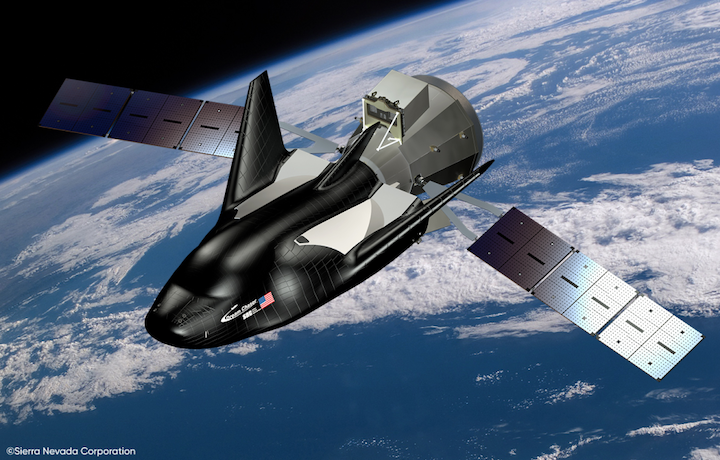 Dream Chaser may get off the ground next year.

2021 could be a big year for Sierra Nevada Corp.

The Colorado-based spaceflight company is on track for a 2021 launch debut of its robotic Dream Chaser space plane, even as the firm shoots for the moon under NASA's Artemis program, Sierra Nevada Corp. (SNC) representatives said.

Dream Chaser was originally designed to carry humans, but its first delivery will be a cargo resupply mission to the space station. In 2014, SNC lost out to SpaceX and Boeing for NASA contracts to launch astronauts. However, in 2016, NASA selected Dream Chaser for its Commercial Resupply Services 2 contract, awarding Sierra Nevada a deal for six cargo missions to the space station by 2024.

According to Steve Lindsey, a former NASA astronaut who's now the vice president of space exploration systems for SNC, the company has not stopped working on the crewed version of its space plane. Right now, Lindsey said, the company's priority is ensuring that the cargo version is ready for its first flight, which is scheduled for sometime in 2021.

During a media call on Jan. 9, SNC representatives told reporters that the construction of Dream Chaser will be completed later this year in preparation for its inaugural launch.

"The Dream Chaser space plane is a great example of how we're working to redefine how we access space," Lindsey said on the call.

"Currently, we have a six-mission contract to the ISS, and we're looking forward to even more opportunities beyond that," he added.

Dream Chaser will rely on United Launch Alliance (ULA) to get off the ground. The space plane will launch from and land at NASA's Kennedy Space Center (KSC) in Florida, taking off atop ULA's next-generation vehicle: the Vulcan Centaur rocket.

If the still-in-development Vulcan is not ready when Dream Chaser is called to orbit, SNC officials said that the vehicle can hitch a ride to the ISS atop another ULA rocket — the Atlas V.

Lindsey said that NASA may not be Dream Chaser's only customer. "There's interest, not necessarily [just] from NASA, but other customers," he said during the call. And that interest could grow once the vehicle is operational, the former astronaut added.

"We wouldn't be in this business if we didn't think of commercial entities beyond NASA," Lindsey said. (Ride-share missions, flying non-NASA payloads and a big international market are all things that SNC officials said they're considering.)

When asked if there would eventually be SNC astronauts, Lindsey said yes. He explained that SNC plans to offer two options to its prospective customers: a taxi mode in which SNC provides the crew, and a sort of rental-car model in which customers provide the astronauts flying aboard the craft.

"If someone else is going to fly it, there would be training," Lindsey said. "We would need to train people to fly it." The customer would decide which option works best, SNC representatives added.

In addition to Dream Chaser, SNC is also working on a cargo module called Shooting Star. The versatile module is a 15-foot (4.6 meters) attachment that will provide extra storage for payloads on Dream Chaser missions and facilitate cargo disposal upon reentry into Earth's atmosphere.

The company has big plans for both Dream Chaser and Shooting Star beyond the contracted resupply missions. The duo could be used in other ways in low Earth orbit, and could even play a role in NASA's Artemis program, SNC representatives said.

Additionally, SNC is developing a 27-foot-wide (8.2 m), three-level inflatable habitat called the Large Inflatable Fabric Environment (LIFE) for use in lunar orbit, for transport to Mars or even as a habitat on the lunar or Martian surface.

But that's not all. The company has been a part of robotic planetary exploration for decades, building subsystems for more than 450 missions over the years, including some of NASA's famous robotic explorers.

"We've been part of 14 missions to Mars," John Roth, vice president of business development for SNC, said on the Jan. 9 call.

Such work will continue, he added.

Roth also said that the company is providing equipment for several NASA missions in development, including Europa Clipper, a mission to Jupiter's icy moon Europa; Lucy, which will study Jupiter's Trojan asteroids; and the Double Asteroid Redirection Test (DART).

Janet Kavandi, a former NASA astronaut and current senior vice president of space exploration systems at SNC, told reporters that she joined the company because of its spaceflight heritage and Dream Chaser program.

"Dream Chaser offers the safest and most logical choice in spaceflight," she said, noting that it can land anywhere in the world.

Currently, the winged vehicle is approved to land at two runways: KSC's Shuttle Landing Facility (where the space shuttles also landed) and Huntsville International Airport in Alabama. Technically, the space plane can land on any runway in the world that can support a Boeing 737 airplane. The only catch is receiving Federal Aviation Administration approval to do so.

Lindsey said that the company is working on approvals for additional landing sites, but the process is a lengthy one. "There are a lot of places that are interested," he said. "We're just getting through the regulatory process."

In November, SNC was selected as one of five new commercial partners for NASA's robotic Commercial Lunar Robotic Services (CLPS). Under this program, companies vie for contracts to deliver NASA payloads to the lunar surface, using landers they built themselves.

Lindsey and Roth told reporters that SNC's lander concept is pretty far along in development, and the company is also working on another proposal for a human landing system. SNC has partnered with Dynetics to work on a project for NASA's Human Landing System program, but did not share details beyond that on the Jan. 9 call.