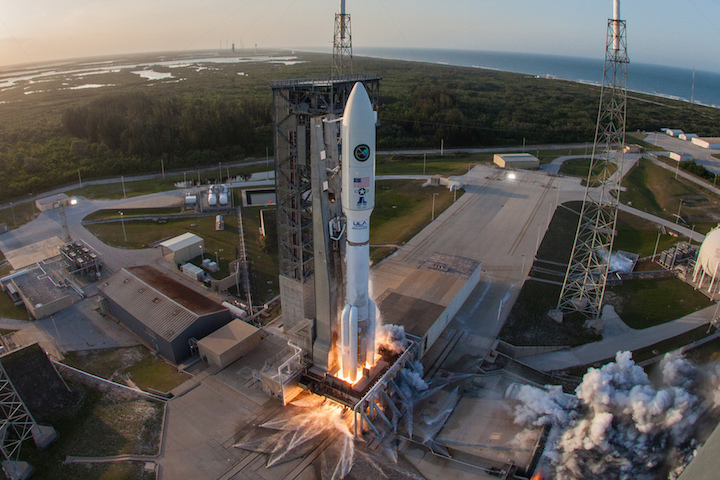 The sixth and final satellite in the U.S. military’s network of ultra-secure, nuclear-hardened AEHF communications relay stations has arrived in Florida for final preparations for liftoff in March on a United Launch Alliance Atlas 5 rocket, the first of nearly 20 U.S. Space Force missions planned for launch in the first year of operations for the new military service.

A military C-5 transport plane flew the AEHF 6 satellite Saturday from Moffett Field, California — near the craft’s Lockheed Martin factory in Sunnyvale — to the Shuttle Landing Facility at NASA’s Kennedy Space Center in Florida. Ground crews moved the satellite — safely stored inside a climate-controlled shipping container — to the nearby Astrotech payload processing facility for final pre-launch testing, inspections and fueling.

The launch of the sixth Advanced Extremely High Frequency communications satellite is scheduled for mid-March from pad 41 at Cape Canaveral Air Force Station aboard the most powerful version of ULA’s Atlas 5 rocket, known as the “551” configuration, with five strap-on solid rocket boosters and a 5.4-meter (17.7-foot-diameter) payload fairing.

The March launch of the AEHF 6 satellite is next in line for ULA after the scheduled Feb. 5 liftoff of an Atlas 5 rocket with the Solar Orbiter spacecraft, a joint U.S.- European science probe to study the physics of the sun. 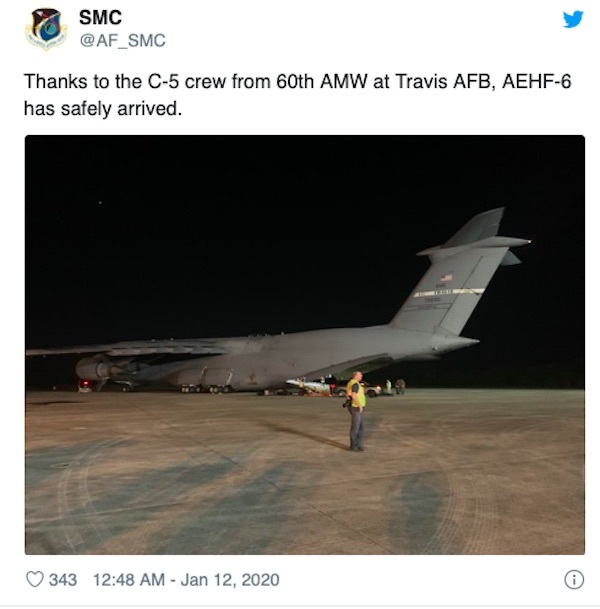 The AEHF 6 satellite will be the first major U.S. Space Force payload to launch after the creation of the new military branch in December. It joins five previous AEHF satellites launched on Atlas 5 rockets since 2010, continuing and expanding secure communications services for U.S. military commanders and the president provided by the military’s earlier generation of Milstar spacecraft.

The Space Force is comprised of military units that previously operated under the umbrella of the now-defunct U.S. Air Force Space Command, including space wings that manage launch ranges at Cape Canaveral Air Force Station and Vandenberg Air Force Base in California. The new Space Force military branch remains part of the Department of the Air Force, and also includes the Space and Missile Systems Center at Los Angeles Air Force Base, which oversees launch and spacecraft procurement and development programs, such as AEHF, GPS and SBIRS satellites for communications, navigation and early warning missions. 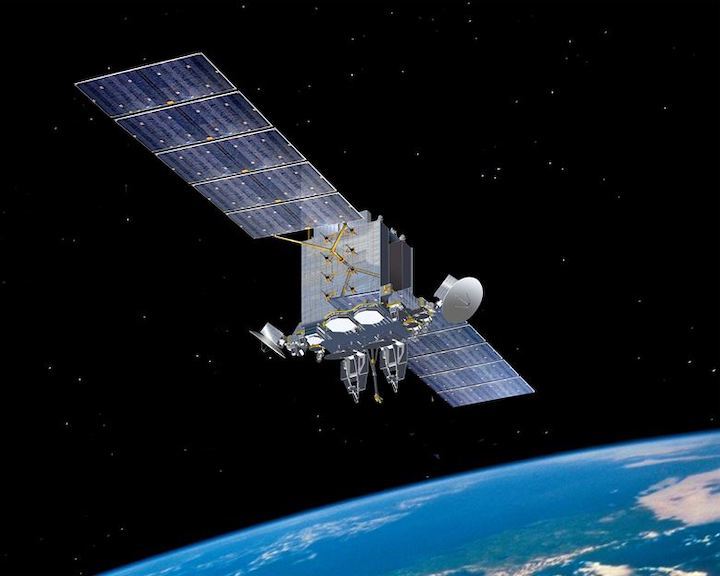 Here’s a list of the publicly-disclosed Space Force missions scheduled for launch in 2020:

The first of the Space Force’s small launch missions scheduled for flight this year will take off on a Northrop Grumman Minotaur 4 rocket from the Mid-Atlantic Regional Spaceport at Wallops Island, Virginia. The Minotaur 4, derived from the military’s decommissioned Peacekeeper ballistic missile, will fire into orbit with a top secret payload for the National Reconnaissance Office, which owns the U.S. government’s spy satellites.

The NROL-129 mission on the Minotaur 4 rocket is scheduled for launch from Virginia in March, according to a Space Force spokesperson. 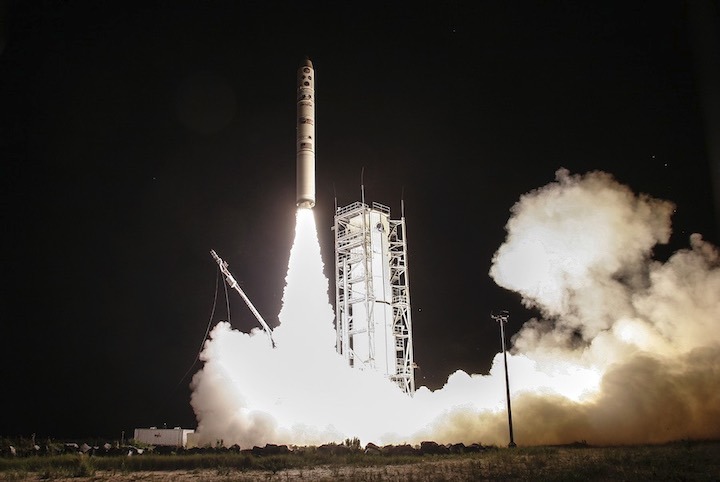 A SpaceX Falcon 9 rocket will launch up to three GPS navigation satellites for the Space Force this year, all from Cape Canaveral Air Force Station in Florida. The first of the three GPS satellites is scheduled for liftoff in April, followed by another GPS mission in the August timeframe. If those two launches occur as scheduled, the Space Force says another GPS satellite could be ready for liftoff in late 2020.

The sixth flight of the Space Force’s X-37B space plane is scheduled for launch in May on an Atlas 5 rocket from Cape Canaveral. The reusable Boeing-built space plane resembles a miniature space shuttle, taking off off on top of a conventional rocket and returning to a runway landing at the end of each mission.

The May launch of the next X-37B mission is officially designated as the AFSPC-7 mission. An Atlas 5-501 rocket with a five-meter payload shroud and no solid rocket boosters will deliver one of the two X-37B space planes in the Space Force’s inventory to an orbit several hundred miles above Earth for a top secret mission expected to last months or years. 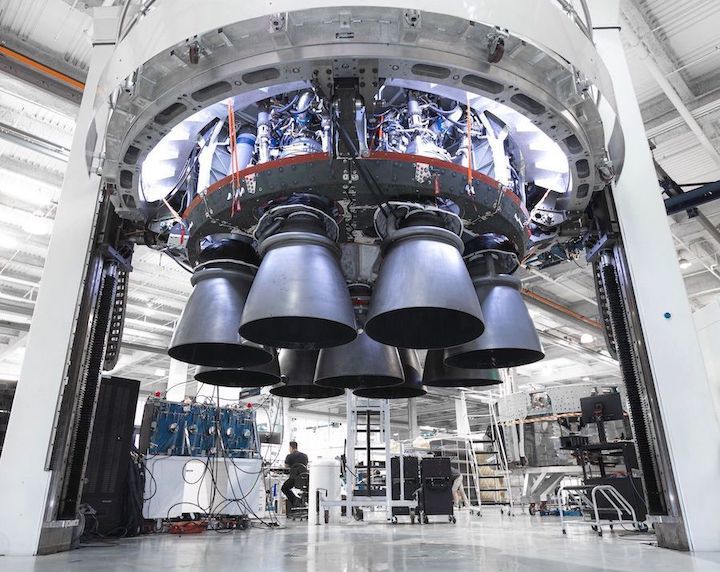 At least two of the RALI missions are scheduled for launch in 2020.

The STP-27RM mission will carry the Air Force Research Laboratory’s Monolith technology demonstration microsatellite into orbit on top of a Rocket Lab Electron booster. The mission is planned for liftoff in the spring timeframe, and will mark the first Rocket Lab launch from the company’s new launch pad at the Mid-Atlantic Regional Spaceport on Virginia’s Eastern Shore.

A rideshare launch with multiple small satellites is planned for the summer on Virgin Orbit’s LauncherOne booster, which is scheduled for an inaugural test flight in the coming months. The air-launched rocket will fire into orbit from a modified Boeing 747 jumbo jet after taking off from Andersen Air Force Base in Guam.

Two additional orbital RALI missions are also scheduled this year, but their launch vehicles and launch schedules have not been announced. A rideshare launch with multiple experimental small satellites for the military’s Space Test Program is also planned for liftoff this year on an unidentified rocket.

The Space Force’s small launch program also plans to perform a Minotaur 1 rocket launch in late 2020 from Wallops Island, Virginia. The Minotaur 1 mission for the National Reconnaissance is designated NROL-111, and no information has been disclosed about its payload.

There are two suborbital missions on the Space Force’s small launch manifest this year. 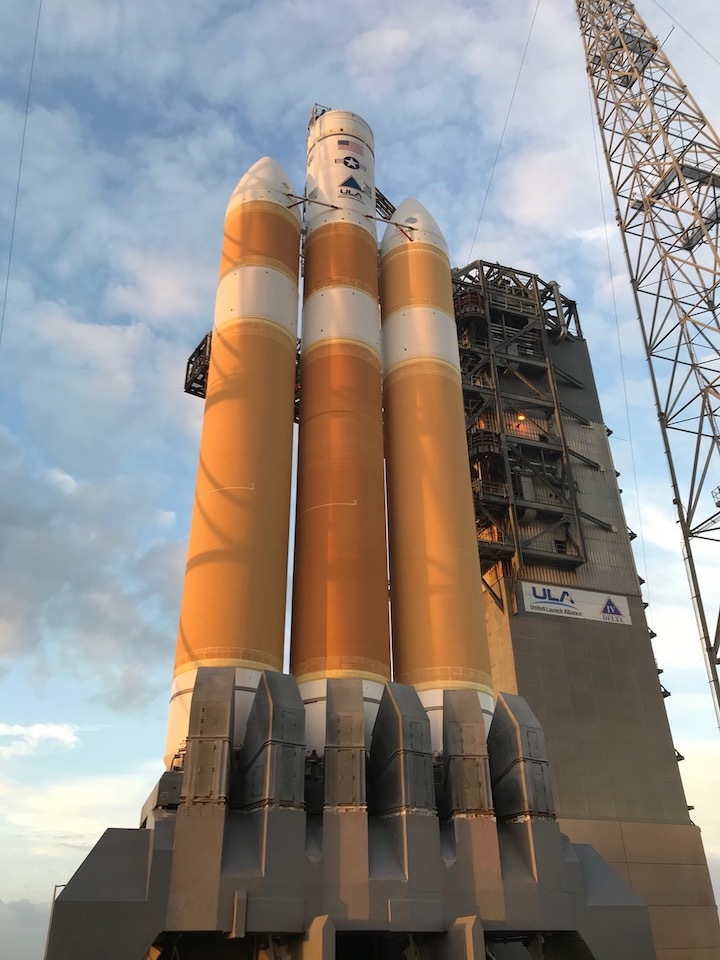 Several more Space Force missions are being readied for launches in the second half of 2020.

ULA will launch an Atlas 5 rocket in the September timeframe with a classified payload for the NRO. The launch from Cape Canaveral, codenamed NROL-101, is scheduled after the departure of NASA’s Mars 2020 rover mission on an Atlas 5 flight in July.

Another Space Force mission is also on ULA’s Atlas 5 manifest in late 2020, according to a military spokesperson. The AFSPC-8 mission from Cape Canaveral will carry the fifth and sixth satellites for the Geosynchronous Space Situational Awareness Program, or GSSAP, which is designed to help the military track and observe objects in geosynchronous orbit more than 22,000 miles (nearly 36,000 kilometers) above Earth.

The Space Force’s launches on Atlas 5 rockets this year will be scheduled among several other critical Atlas 5 missions on ULA’s 2020 manifest. Besides the Solar Orbiter and Mars 2020 launches for NASA, ULA is on contract with Boeing to launch the first piloted flight of the company’s CST-100 Starliner commercial crew capsule with three astronauts heading for the International Space Station.

A launch date for the Starliner’s first crewed mission has not been announced.

Just one Space Force launch is planned this year from Vandenberg Air Force Base in California, the usual launch site for military surveillance satellites heading into polar orbit.

ULA is planning to launch a Delta 4-Heavy rocket some time between October and the end of the year from Space Launch Complex 6 at Vandenberg with the National Reconnaissance Office’s NROL-82 mission. 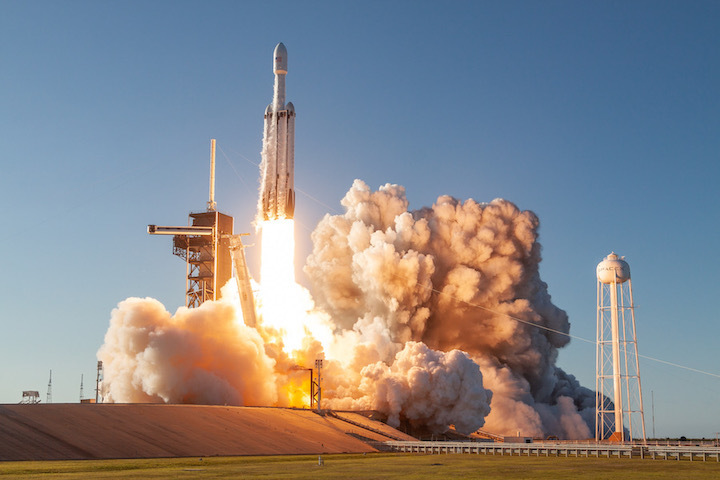 The fourth flight of SpaceX’s Falcon Heavy rocket — the most powerful launcher in the world currently in operation — is also scheduled before the end of 2020 with the Space Force’s AFSPC-44 mission. Little is known about the purpose of the payloads on the AFSPC-44 launch, but officials have indicated the mission will loft at least two satellites into a high-altitude geosynchronous orbit.

The Falcon Heavy will lift off from pad 39A at NASA’s Kennedy Space Center in Florida, the only SpaceX launch site configured to launch the heavy-lifter.