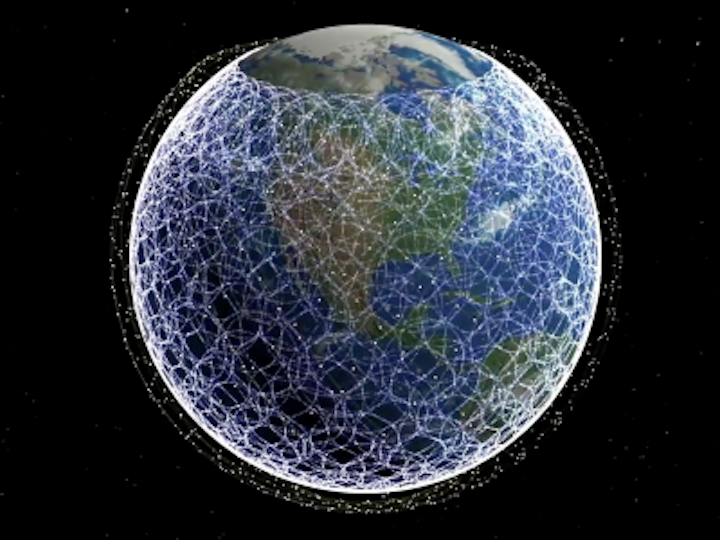 SpaceX is racing to launch about 1,400 satellites this year and boot up Starlink, a planet-wide, ultra-high-speed internet service. The rocket company, founded by Elon Musk, may ultimately send up 12,000 or even 42,000 in the coming decade.

To that end, SpaceX on Monday launched a pallet of 60 freshly redesigned Starlink satellites on Monday – adding to 120 experimental spacecraft already in orbit – and plans to pull off similar launches every two weeks.

With anticipation building over Starlink’s debut, company founder Elon Musk explained how future subscribers will connect to the service using a device called a phased-array antenna, which he said in 2015 should cost around $200 each. (Though some industry analysts say such devices today cost about 10 times as much.)

„Looks like a thin, flat, round UFO on a stick. Starlink Terminal has motors to self-adjust optimal angle to view sky,“ Musk tweeted, adding that all a user has to do is plug it in and point it upward. „These instructions work in either order. No training required.“

What Musk did not say is how, exactly, early adopters will actually send and receive data – whether it’s information about financial markets halfway around the world, or streaming video of „The Bachelor“ on a Hulu server farm – using satellites moving around Earth at 17,000 mph, and in a dizzying variety of paths called orbital planes.

But Mark Handley, a computer science professor at University College London, posted a YouTube video on December 20 that models the Starlink network and makes some educated guesses. Handley said he used recent documents from the Federal Communications Commission (FCC) and statements from both Musk and Gwynne Shotwell, SpaceX’s president and COO, to arrive at his conclusions.

If Handley’s latest guesswork is correct, each of Musk’s „UFO on a stick“ terminals that users pay to handle their own data could be a secret weapon that helps Starlink get data for countless other subscribers to and from its destination – and do so at speeds that handily beat fiber-optic cables. (SpaceX did not respond to Business Insider’s queries on the matter.)

„This is the most exciting new network we’ve seen in a long time,“ he previously told Business Insider. He added that the project could affect the lives of „potentially everybody.“

Here’s how Handley thinks Starlink might work this year and going forward.

Musk has said grabbing just 1-3% of the global telecommunications market through Starlink could pocket SpaceX tens of billions per year in revenue — much more than it may ever make launching rockets.

SpaceX can launch 60 roughly desk-size, 500-pound satellites at a time into space within the nosecone of its Falcon 9 rocket system. 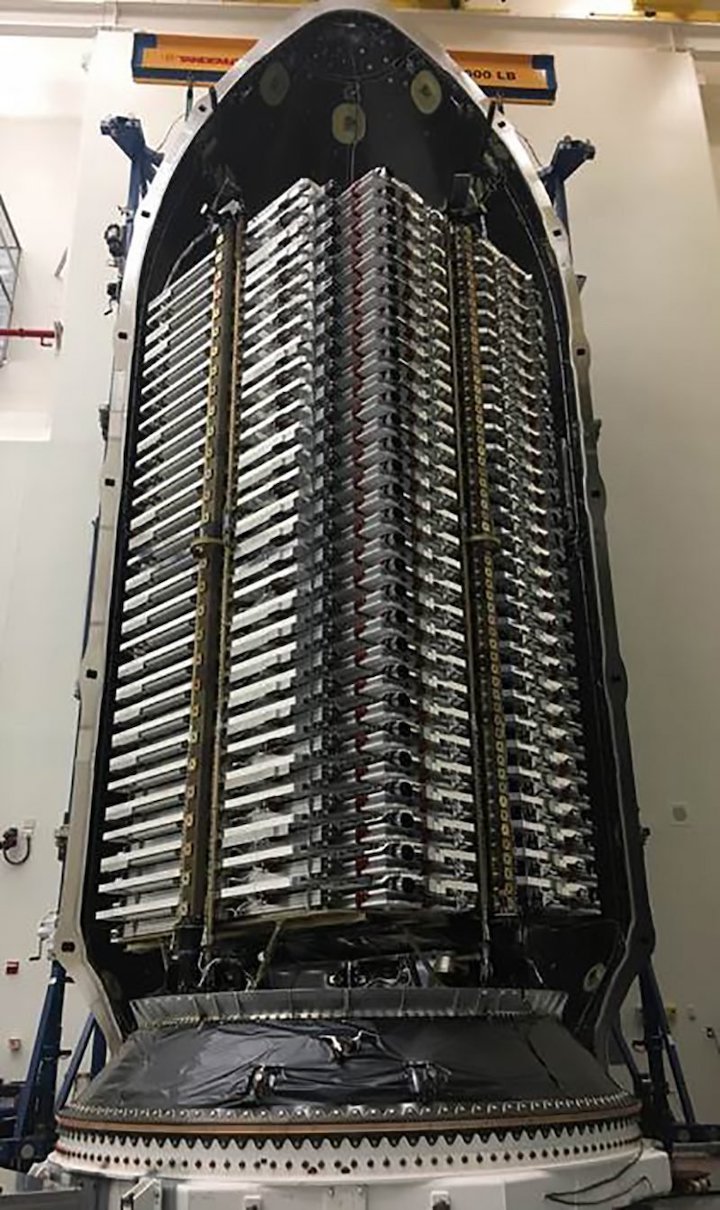 Foto: SpaceX stuffed a fleet of 60 Starlink internet-providing satellites into the nosecone of a Falcon 9 rocket for launch in May 2019.sourceElon Musk/SpaceX via Twitter

In early 2019, Musk said it will take about 400 satellites to establish „minor“ internet coverage and 800 satellites for „moderate“ or „significant operational“ coverage. The immediate major goal is to deploy about 1,500 satellites about 340 miles (550 kilometers) high. 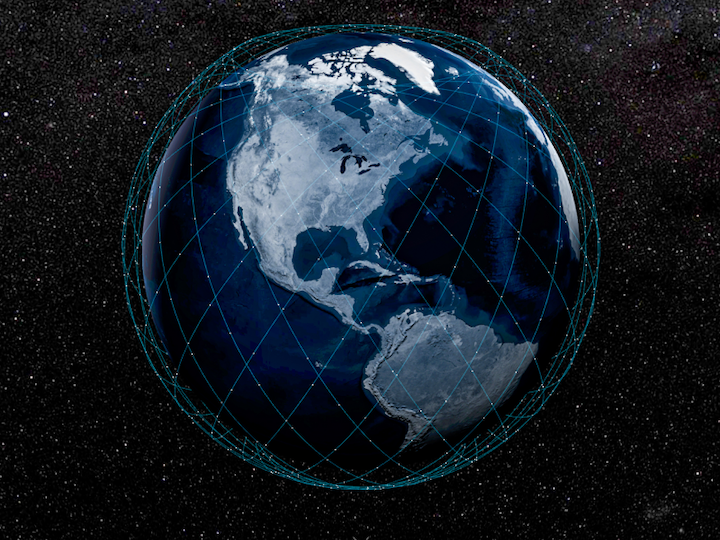 The internet is basically a series of connected computers, but how they’re connected makes a significant difference. SpaceX’s gambit with Starlink is make access faster and more widespread, yet less laggy and expensive than is provided by current internet service providers, or ISPs.

A lot of our data is sent in pulses of light through fiber-optic cables. More packets of information can go farther with a stronger signal that way than they could via electrical signals sent through metal wires.

But fiber is fairly expensive and tedious to lay, especially between locations on opposite sides of the Earth.

Even within a country, achieving a direct wired path from one location to another is rare. Relying on ground cables also leaves many regions poorly connected.

Mobile services give us wireless access to the internet, but much of the core service depends on existing internet technologies, including fiber-optic cable networks.

That’s because cell towers require line-of-sight to pass by data wirelessly. Geography, cost, regulations, property rights, and other hurdles make it practically impossible to build enough towers to link together this way.

Meanwhile, fiber-optic cables have a speed limit: Light moves through the vacuum of space about 47% faster than it can through solid-glass cabling.

This isn’t an issue for normal browsing or streaming TV shows. But over international distances, it leads to high latency, or lag. Handley said time delay is especially pronounced in long-distance videoconferencing and voice calls made over the web.

Data beamed over existing satellites is some of the laggiest. That’s because nearly all those spacecraft orbit from 22,236 miles (35,786 kilometers) up, where they can „float“ above one location on Earth. That’s enough distance to cause a more than half-second of lag.

Handley said that latency matters most to financial institutions. With markets that move billions of dollars in fractions of a second, any delay can lead to big losses over a competitor with a less laggy (and thus more up-to-date) connection to the web.

Shuttling data around the world via satellite — and mostly through the vacuum of space, not glass — could cut that lag while also providing screaming-fast internet service almost anywhere on Earth.

SpaceX deploys each flat-packed stack of 60 satellites at once, yet very slowly rotates it in microgravity. This causes the stack to spread out like „a deck of cards on a table,“ Musk said in 2019.

From there, the satellites use Hall thrusters (or ion engines) to rise to an altitude of about 342 miles (550 kilometers). This is about 65 times closer to Earth than geostationary satellites — and that much less laggy.

Final Starlink spacecraft will link to four others using lasers. No other internet-providing satellites do this, Handley said, and it’s what would make them special: They can beam data over Earth’s surface at nearly the speed of light, bypassing the limitations of fiber-optics. 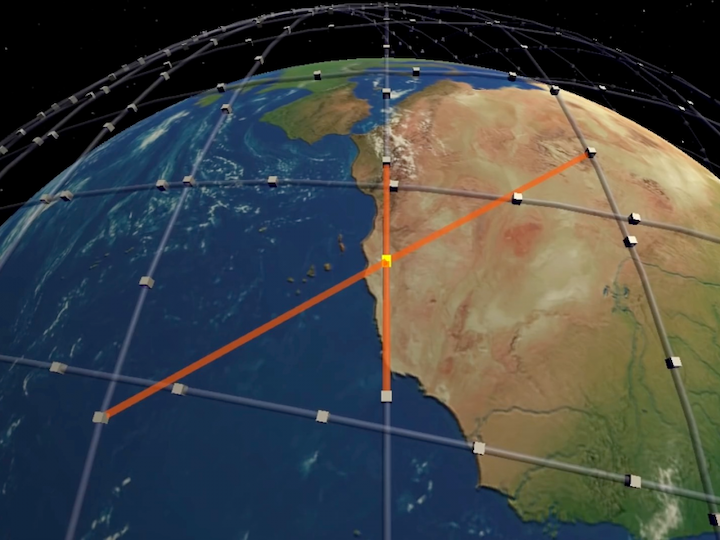 Foto: An illustration of Starlink, a fleet or constellation of internet-providing satellites designed by SpaceX. This image shows how each satellite connects to four others with laser beams.sourceMark Handley/University College London

But for now, none of the Starlink satellites have laser beams. Gwynne Shotwell, SpaceX’s president and COO, told reporters in October that laser interlinks won’t be working until late 2020 at the soonest.

Until then, Musk says the company will link them via ground stations. A handful of sizable yet steerable antennas that can track satellites will be used to „talk“ to the satellites.

There are also small user terminals for the customers to connect — the ones Musk he said look like „a UFO on a stick“ or, previously, „a sort of a small- to medium-size pizza.“ (Though he or SpaceX has yet to show a picture of one.)

That’s small enough to add to a home. „There’s also no reason one of these couldn’t be flat and thin enough to put on the roof of a car,“ Handley said.

But according to SpaceX’s FCC filings, the company expects to operate 1 million ground stations. Handley thinks the small terminals will not just download and upload one user’s data, but also act as critical nodes before the laser links are ready — turning customers into a kind of global mesh network.

Handley and others previously assumed SpaceX would only use lasers because they took the most direct (and fastest) path through space. But Handley’s new analysis of Starlink’s network suggests turning customers into relays would make the network even faster and more resilient.

Without lasers, data could get to and from computers around the world through Starlink by bouncing from satellite to user terminal to satellite and so on in a light-speed daisy-chain.

Handley calculated this would significantly beat the speed of the current internet, and even an ideal one made entirely of uninterrupted fiber-optic cable.

And as more users sign up and plug in their UFO-like terminals, Starlink satellites overhead may have more options for building optimal paths to transmit data.

Customer terminals also solved a problem Handley previously saw with planned laser links: Due to the arrangement of the satellites in space, some connections — like London to Johannesburg — had to go out of their way, causing them to be slower than fiber-optic cables.

Using terminals alone made the trip much quicker, according to his model.

Mixing both the laser links and user terminals, though, provided the fastest of any solution to shuttle internet data to and from a location.

One hurdle SpaceX needs to overcome before laser links are available: Oceans. Though ground stations strategically placed on islands could close the gap. Handley suspects terminals attached to ships would still be needed.

But even Handley doesn’t see too much of a problem. „Ships aren’t cheap, but they’re not cheaper than rockets. So this is probably doable,“ he said in his video.

It might be even cheaper for SpaceX to put ground stations close to fiber-optic cables and use them to bridge the divide, at least until the lasers become available.

In any case, the data won’t magically know which path it should take; SpaceX will have to constantly calculate the locations of all its satellites and ground stations. But Handley said he was able to compute that in negligible with his personal computer „with a few devious tricks inspired by how game engines work.“

Watch Handley’s complete speculative explanation about how Starlink might work below.