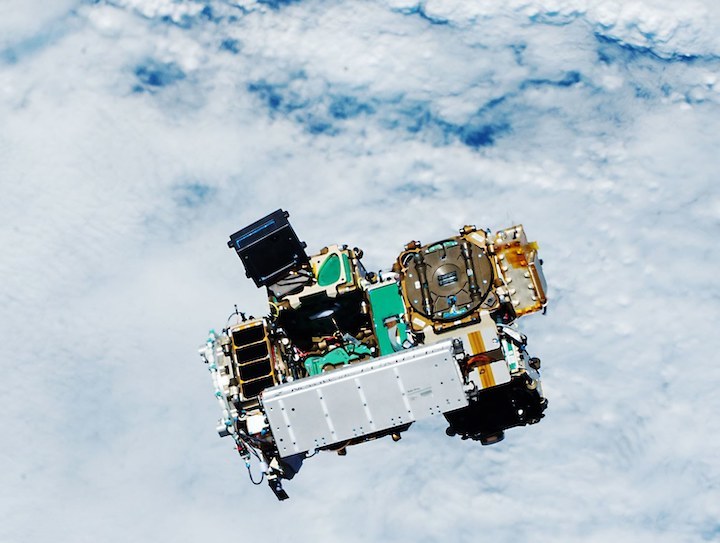 An earlier NovaWurks satellite, as seen from the International Space Station. This was the company's first test of ‘satlets’ in space.COURTESY OF NOVAWURKS

Just about a year ago, SpaceX sent the rocketry equivalent of a clown car to space: A rocket crowded with more than 60 small satellites. Inside one of them, Excite, were even more. It was actually a satellite made of other satellites, all clones of each other, all capable of joining together and working together. It was one of the first in-space tests of such a contraption—but in the coming years, this modular approach is likely to show up on more and more missions.

Excite was flung into space courtesy of a company called NovaWurks, which makes “satlets.” The suffix—like that of “piglets”—implies littleness, and indeed these 14 satlets are smaller than a standard piece of paper and only a few inches thick. Even at that size, they supply everything a satellite needs—a way to communicate with Earth, a way to move in space, a way to process data, and a source of power. You just hook your camera, radiation sensor, or computer circuit in before launch and then send the whole package to space. Each satlet, which NovaWurks calls a HISat, can also physically join up with others, forming one larger unit that shares resources.

On this launch day, liftoff was as perfect as a picture. Once the rocket soared to its appointed height, Excite entered its orbit. All seemed good, and most of the attached instruments—as well as the spacecraft itself—performed pretty much as expected. But Excite wasn’t able to send commands to some of the devices aboard. The spacecraft had technical difficulties connecting to some payloads, and three of the eight payloads plugged into the satlets couldn’t hear and obey their groundmasters.

Nonetheless, this failure has been seen as an acceptable bump along a very compelling road. Plug-and-play satellites are like the Konmari method transposed to space: They cost less money, they take less time, and because they let engineers focus on instruments rather than logistics, they spark more joy. Organizations like NASA, the Air Force, and the National Reconnaissance Office are all realizing they like that type of joy, and are pumping out contracts and programs that provide this new technology with a ride to orbit. And NovaWurks was one of the first companies to actually take the idea to space.

Darpa—the Department of Defense’s advanced R&D organization —got the modular party started early with a project called Phoenix. One of its goals, says program manager Todd Master, was to figure out whether it would be possible to combine small satellites into a larger one. Sort of like Legos, except rather than merely snapping them together, getting them to work together. In 2012, the agency started doing business with NovaWurks, which eventually became the prime contractor for that part of the project.

The great promise of satlets is that they are agnostic about what instruments they support and about what function they fulfill. They can be mass-produced, which both slashes costs and dents the idea that each new instrument to be sent into orbit requires a whole new satellite. Instead, you can buy a satlet (or 15) that will provide everything your camera, radar device, radio detector, infrared sensor, or data processor will need. In theory, the set can also fix itself after launch by reallocating resources: A group of linked satlets can share functions among themselves and adjust their effort based on changing needs. If a battery in one gets a bad cell, for instance, its partners can help out.

This approach makes sending stuff to space less risky, and potentially faster for developers, because they don’t need to build an entire satellite from scratch. Other companies plan to offer mass-produced satellite platforms. But few others can connect a set of them into one larger system, and make all the elements play together. With that particular pitch, NovaWurks won around 40 million Darpa dollars, and the partners jointly recruited parties to put payloads aboard.

One of those was the computing experiment Maestro, led by David Barnhart of the University of Southern California’s Information Sciences Institute. Chips and processors in space systems have lagged, because of power limitations and the need to cope with radiation. “In the particular case of processors, the ones that were the most radiation-tolerant were also the slowest you could possibly imagine,” says Barnhart. His goal: To demonstrate that a processor with 49 cores, hardened against space radiation, could work.

The upside of being part of the Excite launch, for Maestro, was simple: It was free. “The downside is everything is experimental,” he adds. Indeed, because of the communications glitch, Barnhart didn’t get any data back. But his team did learn that they could build both the payload and the software to make sure the cores are working in orbit.

Another Excite payload that didn’t get to exercise its full potential was R3S, a NASA instrument that aimed to help understand how much radiation airline workers encounter. “They were never able to turn on R3S,” says Carrie Rhoades, Langley Research Center’s smallsat lead. But she, like Barnhart, doesn’t rue that result. “It was a high-risk project in the first place,” she says. “We should be taking those kind of risks.”

The National Reconnaissance Office, which runs the US federal government’s surveillance satellites, is taking a similar approach, playing around with small standardized systems that engineers can hook instruments into. Like NASA, the agency historically has launched hugely expensive satellites that sometimes keep doing their jobs for more than 20 years, meaning they may not have the latest-greatest stuff inside. Sending up few extremely costly satellites can tamp down on risk-taking, because there’s no good way to fix a problem in a far-out orbit, or change design before launch.

In response, and to take advantage of commercial technology, the NRO established a new “Greenlighting” program in 2017, to provide developers with a quick, cheap way to test technology in space. The NRO has created a standard interface, the size of a deck of cards, that people can stick their experiments into. Multiple interfaces can be stacked together, and experiments swapped in or out, before launch. The stack can distribute resources to multiple experiments, but it unlike a HISat it must hook into the body of an actual satellite.

One of the first Greenlighting experiments deemed ready for space was a processor the size of a quarter that had been developed by the oil and gas industry. The idea was to see how something designed to survive the rigors of energy extraction could fare in another harsh environment. Greenlighting also can test subcomponents, such as materials that might end up in future full-scale satellites. In November of 2019, Greenlighting launched four experiments, and has others on the horizon.

Meanwhile, NovaWurks’ glitches apparently haven’t dampened business. In September, the company was bought for an undisclosed sum in the seven digits by Saturn, a manufacturer that will use satlets to make communications satellites.

NovaWurks’s satlets are also key to Athena, a joint project between NOAA, NASA, and the Air Force’s Space and Missile Systems Center. As part of climate change research, the effort will measure solar energy that Earth reflects and absorbs, gathered via a very small telescope attached to the satlet. Because the team only needs to develop the telescope itself, and not the vehicle to host it, they can work more quickly and easily than before. Athena will test technology that might later go on a larger, more complicated mission.

That “quickly” is important not just from a tech side but also from a human side: Missions often take years and years of work on the ground before they are even scheduled to book a ride on a rocket. It may be a long time before any one engineer gets to work on something that’s going to space, and even longer before that project actually achieves liftoff. “Some of the younger engineers were a bit disenfranchised,” says Michelle Garn, Athena’s project manager. Standardizing the satellite infrastructure and keeping it small means engineers can get stuff space-ready in a few months—and take bigger risks.

For NASA, that culture change toward embracing risk has been the most challenging part of accessorize-your-satlet sort of work, because it’s such a shift from the way the agency has operated in the past. But maybe NASA and other space places like the NRO are adjusting to the idea that it’s okay to have smaller ambitions sometimes, and that when you shrink your goals, it’s okay to risk screwing up, and even to actually screw up. Perhaps these agencies can soon accept the idea that a mission sometimes can be little more than a missionlet.

Raumfahrt - Now Entering Orbit: Tiny Lego-like Modular Satellites Space is getting closer, thanks to small, cheap “satlets” that network themselves to solve problems in flight.
1107 Views
Created with page4