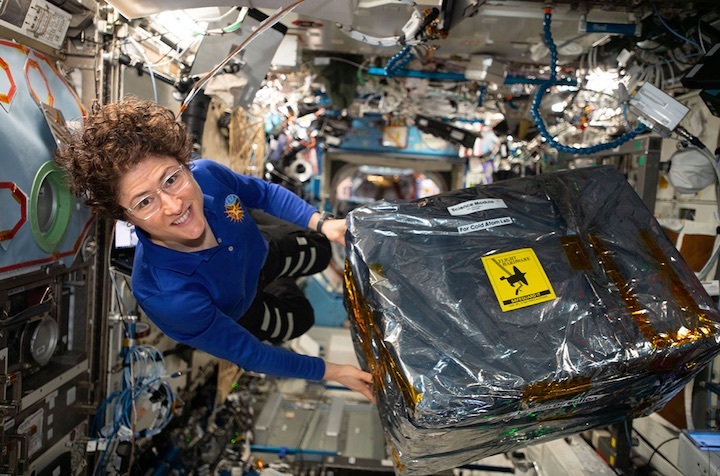 NASA astronaut and Expedition 61 Flight Engineer Christina Koch handles science hardware stowed inside a cargo transfer bag on board the International Space Station in December 2019. Koch is setting a new record for the longest mission by a woman. (NASA)

— A NASA astronaut is set to break a record for time spent in space, and she still has six weeks to go before she returns to Earth.

Christina Koch will surpass the record for the single longest space mission by a woman as previously established by NASA astronaut Peggy Whitson in 2017. The 40-year-old Expedition 61 flight engineer will exceed Whitson's 289 days, 5 hours and 1 minute on Saturday (Dec. 28) at 6:16 p.m. CST (0016 GMT on Dec. 29).

"Having the opportunity to be up here for so long is truly an honor," said Koch during a series of press interviews on Thursday. "Peggy is a heroine of mine and has also been kind enough to mentor me through the years, so it is a reminder to give back and to mentor when I get back."

Koch launched to the space station on March 14 on what was expected to be a typical six-month mission. Then her stay was extended by NASA, in part to collect more data about the effects of long-duration spaceflight. She is now slated to land on Feb. 6, 2020.

"It is a wonderful thing for science. We see another aspect of how the human body is affected by microgravity for the long term. That is really important for our future spaceflight plans, going forward to the moon and Mars," said Koch.

If her return to Earth remains as scheduled, Koch will have logged 328 days in space — just 12 days shy of the longest single spaceflight by a NASA astronaut, 340 days, set by Scott Kelly during his "year-long" mission from 2015 to 2016.

"I like to think of the record as not so much about how many days you're up here, but what you bring to each day, so [it is] another great reminder to just bring your best," Koch said.

In addition to servicing NASA's science goals, Koch said she feels that milestones like hers helps increase outreach and inspires.

"Outreach, because it gets the conversation going about the state of the art, where we are in human exploration. And inspiring, because I think as a milestone it can motivate people," she said. "It also motivates me, because on those rough days I remind myself that, 'You know, this hasn't been done before, it makes sense that it is hard.' It makes sense that I have to dig deep sometimes."

This is the second record that Koch has set during what is her first spaceflight. In October, Koch and NASA astronaut Jessica Meir became the first two women to perform a spacewalk together.

"I think that highlighting it was the first all-female EVA, [or] spacewalk, is important because seeing those milestones be broken tells people where we are at and where we think the importance lies," said Koch. "I think it is inspiring because future space explorers do need to see people who remind them of themselves."

"That was certainly true for me and my background," Koch continued, "so to have that opportunity to do it for future space explorers is a real honor."

Although Koch will take the record the longest single spaceflight by a woman, Whitson retains the records for the most cumulative time in space by an American astronaut and by a woman worldwide at 665 days logged over three missions.

The world record for the single longest mission by any space explorer, man or woman, is held by cosmonaut Valery Polyakov, who spent 438 consecutive days on board Russia's former space station Mir from January 1994 to March 1995. Cosmonaut Gennady Padalka holds the world record for the most cumulative time in space at 878 days over the course of five missions.

"My biggest hope for [this] record is that it is exceeded as soon as possible again, because that means we are continuing to push those boundaries," said Koch. 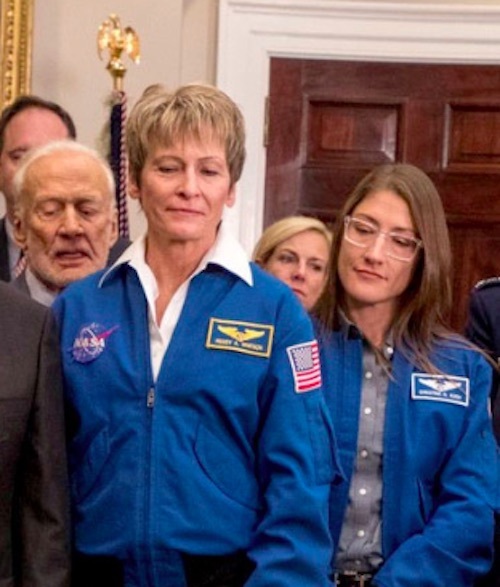 Christina Koch (right) with her heroine and mentor, Peggy Whitson, at a White House bill signing in December 2017. (White House) 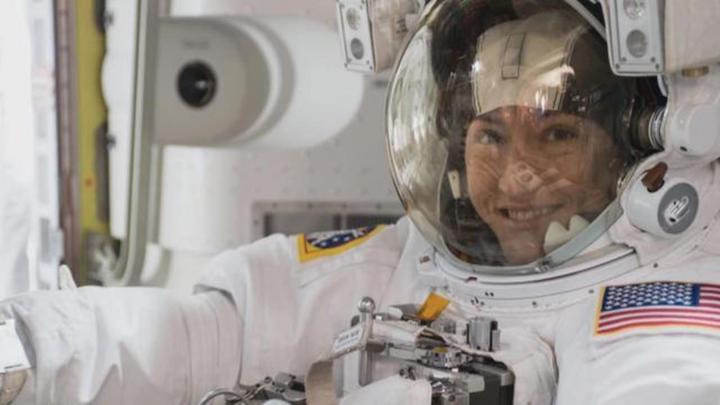 Along the way, Koch has participated in four spacewalks, joining astronaut Jessica Meir for history's first all-female excursion in October. She plans to venture back outside twice more in January, again teaming up with Meir, to complete the installation of new solar array batteries for the station's solar power system. 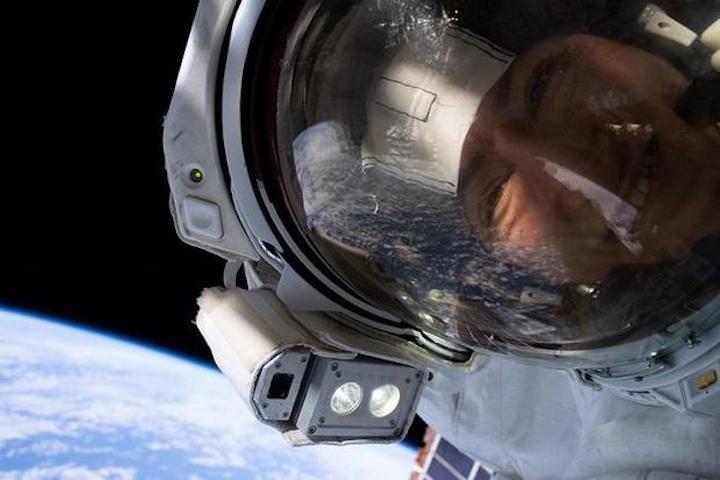 "It's a huge honor," Koch said early Friday in an interview with "CBS This Morning." "Peggy is a heroine of mine who's also been kind enough to mentor me through the years. You know ... it's not so much how many days you're up here, but what you do with each of those days. That reminds me to bring my best every single day."

Koch holds a master's in electrical engineering, is a veteran of multiple research tours in Antarctica and Greenland, and helped design instruments at the Goddard Space Flight Center for NASA science probes in orbit around Earth and Jupiter. She and Meir were selected for NASA's astronaut corps in 2013, joining a class made up of four men and four women.

"It's a wonderful time for human spaceflight because I think we finally recognize that it's not worth going unless we go together, that it's important to not turn away any innovative idea, that everyone has a role and everyone has a place at the table as we move forward," Koch said.

Koch became the 14th woman to walk in space last March 29 when she and Nick Hague worked to install a second set of solar array batteries. She originally was expected to venture outside with astronaut Anne McClain for the first all-female spacewalk, but Hague took McClain's place because of a spacesuit sizing issue.

The all-female spacewalk finally happened on October 18 when Koch and Meir, the 15th woman walk in space, ventured outside to replace a faulty battery charge-discharge unit. It was the first EVA by two women in the 54 years since the late Soviet cosmonaut Alexey Leonov carried out history's first spacewalk in 1965.

Cosmonaut Svetlana Savitskaya became the first woman to walk in space during an excursion with a male cosmonaut in 1984. NASA astronaut Kathryn Sullivan followed suit later that year, joining astronaut David Leestma for a shuttle spacewalk.

"My class was ... the first class that's half female and half male, and we were never held to any different standards or expectations," Koch told "CBS This Morning." "Highlighting the fact that it was the first all female EVA, spacewalk, is important because seeing those milestones be broken sort of tells people where we're at and where we think that the importance lies.

Asked about her most memorable moments in space, Koch said she enjoyed looking down on Michigan and North Carolina where she grew up, "but I would say the most awe-inspiring thing that I've ever seen is the Northern Lights or Southern Lights from above on a planetary scale."

"I've had the opportunity working in Antarctica and the Arctic to see them from below and the beautiful, shimmering lights taking over the whole sky," she said. "But to look down on the Earth and see the entire shape of the aurora as they form near the poles was truly an amazing sight and just literally took my breath away."

Koch said she hopes setting a new single-flight endurance record will serve as a milestone to motivate others while pushing the boundaries of science because "that's important for our future exploration ... going to Mars and also returning to the moon and going there to stay."

"But overall, I'd have to say that my number one hope for this milestone is that the record is exceeded again as soon as possible," she said. "Because that means that we're continuing to push the boundaries."