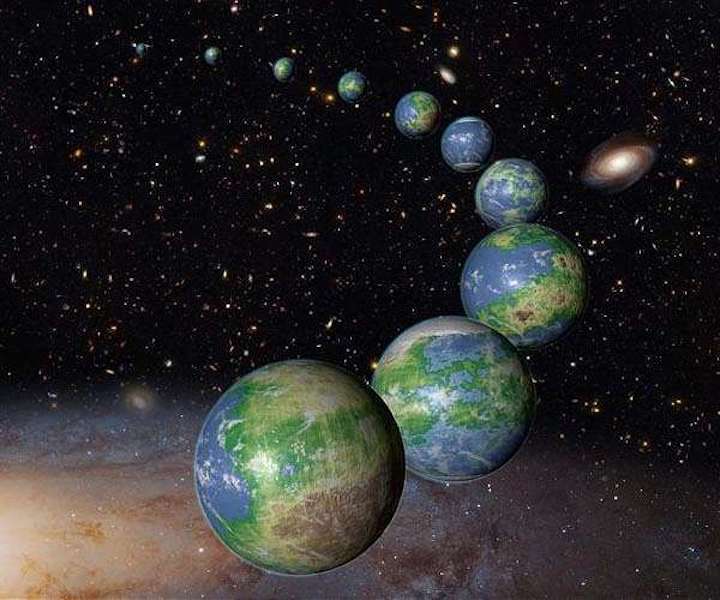 What is really exciting about all of this is that the oxygenation pattern can be created without the need for difficult and complex evolutionary leaps forward, or circumstantial catastrophic volcanic or tectonic events. So it appears that Earth's oxygenation may have been inescapable once photosynthesis had evolved - and the chances of high oxygen worlds existing elsewhere could be much higher.

The existence of habitable alien worlds has been a mainstay of popular culture for more than a century. In the 19th century, astronomers believed that Martians might be using canal-based transport links to traverse the red planet. Now, despite living in an age when scientists can study planets light years from our own solar system, most new research continues to diminish the chances of finding other worlds on which humans could live. The biggest stumbling block may be oxygen - human settlers would need a high oxygen atmosphere in which to breathe.

So how were we so lucky to evolve on a planet with plenty of oxygen? The history of Earth's oceans and atmosphere suggests that the rise to present-day levels of O2 was pretty difficult. The current consensus is that Earth underwent a three-step rise in atmospheric and oceanic oxygen levels, the first being called the "Great Oxidation Event" at around 2.4 billion years ago.

What happened during these three periods to increase oxygen levels is a matter for debate. One idea is that new organisms "bioengineered" the planet, restructuring the atmosphere and oceans through either their metabolisms or their lifestyles.

For example, the rise of land plants roughly 400 million years ago could have increased oxygen in the atmosphere through land-based photosynthesis, taking over from photosynthetic bacteria in the ocean which have been the main oxygen producers for most of Earth's history. Alternatively, plate tectonic changes or gigantic volcanic eruptions have also been linked to the Earth's oxygenation events.

This event-based history of how oxygen came to be so plentiful on Earth implies that we're very fortunate to be living on a high-oxygen world. If one volcanic eruption hadn't happened, or a certain type of organism hadn't evolved, then oxygen might have stalled at low levels.

But our latest research suggests that this isn't the case. We created a computer model of the Earth's carbon, oxygen and phosphorus cycles and found that the oxygen transitions can be explained by the inherent dynamics of our planet and likely didn't require any miraculous events.

One thing we think is missing from theories about Earth's oxygenation is phosphorus. This nutrient is very important for photosynthetic bacteria and algae in the ocean. How much marine phosphorous there is will ultimately control how much oxygen is produced on Earth. This is still true today - and has been so since the evolution of photosynthetic microbes some three billion years ago.

Photosynthesis in the ocean depends on phosphorus, but high phosphate levels also drive consumption of oxygen in the deep ocean through a process called eutrophication. When photosynthetic microbes die, they decompose, which consumes oxygen from the water. As oxygen levels fall, sediments tend to release even more phosphorus. This feedback loop rapidly removes oxygen. This meant that oxygen levels in the oceans were able to change rapidly, but they were buffered over long timescales by another process involving the Earth's mantle.

Throughout Earth's history, volcanic activity has released gases that react with and remove oxygen from the atmosphere. These gas fluxes have subsided over time due to Earth's mantle cooling, and our computer model suggests this slow reduction along with the initial evolution of photosynthetic life was all that was necessary to produce a series of step-change increases in oxygen levels.

These stepped increases bear a clear resemblance to the three-step rise in oxygen that has occurred throughout Earth's history. The model also supports our current understanding of ocean oxygenation, which appears to have involved numerous cycles of oxygenation and deoxygenation before the oceans became resiliently oxygenated as they are today.

What is really exciting about all of this is that the oxygenation pattern can be created without the need for difficult and complex evolutionary leaps forward, or circumstantial catastrophic volcanic or tectonic events. So it appears that Earth's oxygenation may have been inescapable once photosynthesis had evolved - and the chances of high oxygen worlds existing elsewhere could be much higher.