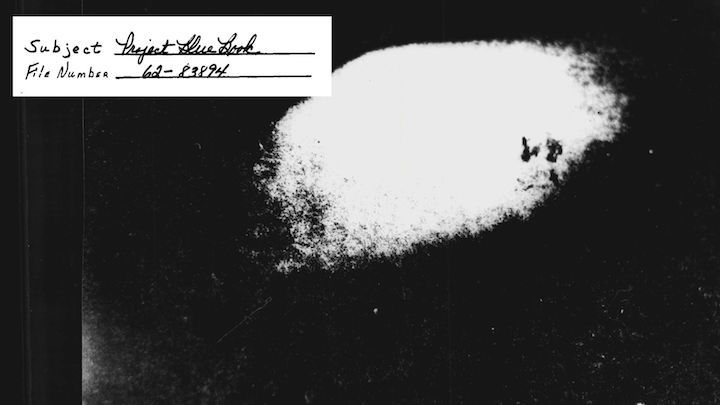 50 Years Ago, the Air Force Tried to Make UFOs Go Away. It Didn't Work.

Since the end of Project Blue Book in December 1969, our interest in the unexplained has only grown stronger. So has the research.

Fifty years ago today, the U.S. Air Force announced the closing of its most famous UFO investigation program, Project Blue Book. While the government’s goal was to “make UFOs go away,” it forced a community to take matters into its own hands. And it worked: If the events of this yearalone are any indication, UFOs remain as hot of a topic in the general conscience than ever. But we wouldn’t be here if it weren’t for Blue Book.

In 1947, due to a string of “flying saucer sightings,” the Air Force began its campaign to understand the UFO phenomenon. Quietly, it put together a project, known as Sign, to investigate reports of UFOs. According to some researchers, one of Sign’s alleged final reports, commonly known as the “Estimate of the Situation,” openly favored the notion that flying saucers were extraterrestrial in origin.

While the report has never been released to the public, and is probably more mythological than real, many within UFO circles believe that Sign’s closure and replacement with the short-lived Project Grudge in 1949 attempted to engage in the active debunking of UFO incidents. The Air Force also eventually shut Grudge down in 1951, declaring that UFOs were hoaxes and misidentification—yet admitted that roughly 23 percent of the cases it investigated were unexplainable.

In 1952, the Air Force initiated its final UFO investigation, the now-famous Project Blue Book. Initially led by Air Force Captain Edward J. Ruppelt, in nearly two decades, it collected between 12,000 and 15,000 cases and was designed to be a fair and honest look at the UFO situation, succeeding where Sign and Grudge had failed. But while initial intentions may have been good, the project quickly went bad. 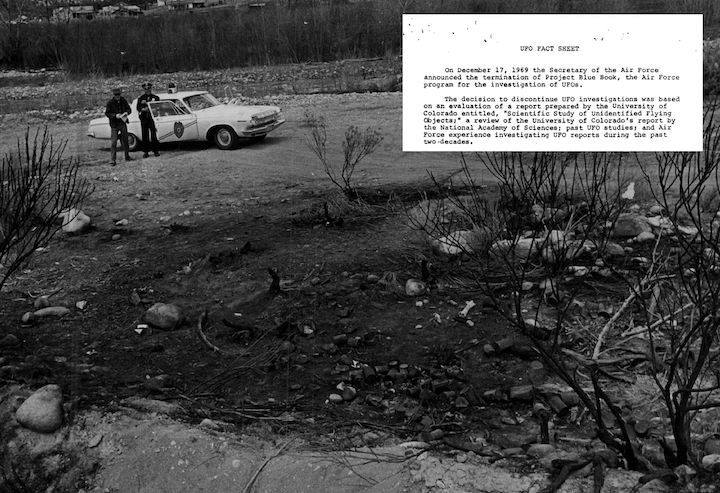 In 1953, a year into Blue Book’s run, the government formed the Robertson Panel to look at UFO reports, in the wake of a string of odd aerial objects being spotted over Washington, D.C. the previous year. Comprised of academics and scientists, the panel concluded in its classified report that UFOs posed no risk to national security, and proposed that the National Security Council actively debunk UFO reports to ensure UFOs become the subject of ridicule. It also recommended that UFO investigative and research groups be monitored by intelligence agencies for subversive activity.

“Strictly speaking, Project Blue Book was formed to determine whether UFOs represented a threat to our nation,” Mark O’Connell, author of The Close Encounters Man: How One Man Made the World Believe in UFOs, tells Popular Mechanics. “Over time, when it was evident that Blue Book was utterly incapable of answering that question, its mission became one of ‘making the UFOs go away.’”

With very little funding, Blue Book was kneecapped in 1953. Moreover, staffers faced extreme scrutiny. As UFO sightings came in constantly, a revolving door of other commanding officers replaced Ruppelt—generally viewed as fair—and those leaders weren’t nearly as open to the flying saucer question. According to some researchers, the number of cases that couldn’t be debunked rested somewhere between 3,000 and 5,000.

“It was a rigged game because Blue Book investigators were under constant pressure to debunk and explain away any and all UFO reports that reached their offices,” O’Connell says. “The worst sin one could commit on the Blue Book staff was to mark a case ‘unexplained.’”

For almost 20 years, Blue Book investigated UFO sightings and reports, but in 1968, the infamous Condon Report, which was a product of the Air Force and the University of Colorado, took the final position that all UFO incidents were human delusion, hoaxes, or had some prosaic explanations. In other words, the UFOs that supposedly posed a risk to national security were nothing more than fantasy.

“The committee recommended that the Air Force get out of the UFO business,” O’Connell says. “And the Air Force was more than happy to follow the study’s recommendation to pull the plug on its 20-year headache.” 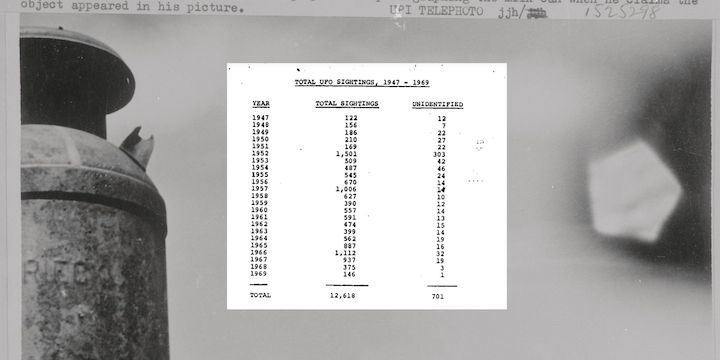 When a photographer was taking a photo of a milk can in 1966, this UFO appeared in his image—here shown over Pennsylvania farm grounds. Researchers say the number of cases in Project Blue Book that couldn’t be debunked rested somewhere between 3,000 and 5,000.

One Door Closes, Another Opens

On December 17, 1969, the Secretary of Air Defense announced the closure of Project Blue Book. Respected archivist and historian Brad Sparks explained in a 2016 report that Blue Book continued to receive reports after that date and wasn’t actually shuttered until January 30th, 1970. Whatever the case, the end of Blue Book concluded the U.S. government’s interest in UFOs.

“There is no question that various commands of the Air Force, as well as the other three branches of the armed forces, continued to accept UFO reports well beyond the termination of Project Blue Book,” Australian UFO researcher Paul Dean tells Popular Mechanics.

Dean, who operates a blog dedicated to collecting and evaluating declassified military documents, says there are literally hundreds of pages of documents that prove the government collected sighting reports, predominantly from military personnel. “Of course, accepting UFO reports is hardly the same thing as investigating and analyzing them,” he says. “It turns out, despite the constant denials of the [Air Force], that incoming reports were indeed investigated, and conclusions were established.”

In simple terms, the UFO phenomenon didn’t go away. It only became stronger.

“THE AIR FORCE WAS MORE THAN HAPPY TO PULL THE PLUG ON ITS 20-YEAR HEADACHE.”

The irony is that the cancellation of Blue Book allowed UFO researcher J. Allen Hynek—an astronomer that advised on Sign, Grudge, and Blue Book, and later developed the “Close Encounter” classification system for UFO sightings—to “finally investigate UFO incidents his own way, free of the restrictions imposed on him by the Air Force,” says O’Connell. “To double up on the irony factor, Hynek and many others felt that the Condon report actually made a strong case that UFOs were an unexplainable, but real, phenomenon that was worthy of ongoing scientific study,” he says.

Today, the political and academic stigma that surrounds UFOs, created so many years ago by the Robertson Panel and a motley collection of confidence artists, profiteering “UFO experts,” and kooky cult leaders, is beginning to erode. Rational UFO discourse seems to be on the uptick as organizations begin to muster support to engage in actual scientific studies of aerial anomalies. The recent announcement by the U.S. Navy that unknown aerial objects do indeed violate American airspace, and that the Pentagon ran a secret UFO investigation program in the late 2000s, has only led to an increased interest in all things ufological. 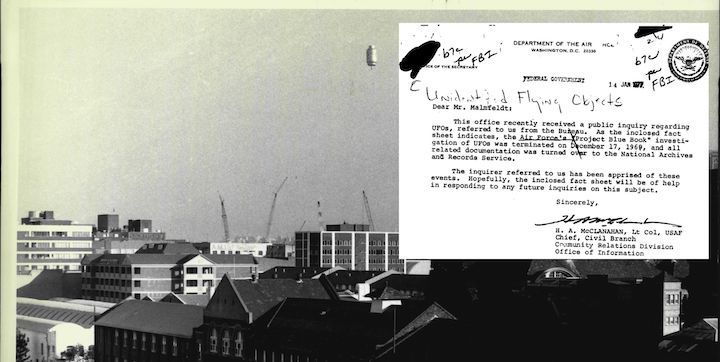 A UFO floating high above Australia’s Darling Harbour project in 1988. Though Project Blue Book closed in 1969, the study of UFOs has never been more prominent than it is today.

Failure Leads to the Future

David O’Leary, creator of HISTORY Channel’s Project Blue Book, a dramatized and fictional program of the same name as the Air Force program, says that on a cultural level, UFOs have always been buzzworthy, but there now seems to be a positive shift in how they’re viewed by people outside of the UFO community.

“I think that for the first time, there’s sort of a conscious awakening to what’s happening,” O’Leary tells Popular Mechanics. “I think that people certainly understand that. One hundred percent. There is something flying in our skies and we don’t understand what it is.”

While the closure of Blue Book was intended to be the nail in the phenomenon’s coffin, the plan didn’t exactly work out the way the Air Force had hoped.

“I think you have to go back and look at the beginning to understand how and why there seems to be so much secrecy, denial, confidentiality, classification, and all that kind of stuff around this issue, and how those decisions were determined,” says O’Leary. “That lets you know that privately, the U.S. government wants to study this phenomenon and it takes it very seriously.”

“THERE IS SOMETHING FLYING IN OUR SKIES AND WE DON’T UNDERSTAND WHAT IT IS.”

“And,” O’Connell continues, “I think there’s also a lingering sense among a great many UFO enthusiasts that we could have done it better than the Air Force did. So to many, Blue Book represents a great success of sorts, but also a great missed opportunity.”