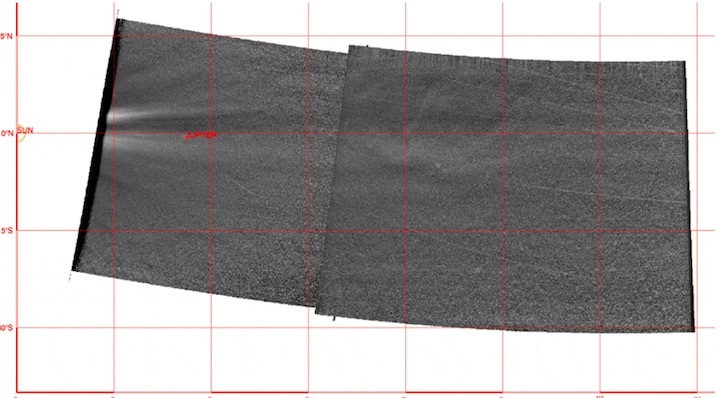 Nearly a year and a half into its mission, Parker Solar Probe has returned gigabytes of data on the Sun and its atmosphere. Following the release of the very first science from the mission, five researchers presented additional new findings from Parker Solar Probe at the fall meeting of the American Geophysical Union on Dec. 11, 2019. Research from these teams hints at the processes behind both the Sun's continual outflow of material — the solar wind — and more infrequent solar storms that can disrupt technology and endanger astronauts, along with new insight into space dust that creates the Geminids meteor shower.

The solar wind carries the Sun's magnetic field with it, shaping space weather throughout the solar system as it flows out from the Sun at around a million miles per hour. Some of Parker Solar Probe's primary science goals are to pinpoint the mechanisms that send the solar wind streaming out into space at such high speeds.

Animation of data from the WISPR instrument on Parker Solar Probe. The Sun is at the left of the animation, and Jupiter is highlighted in red.
Credits: Naval Research Laboratory/Johns Hopkins Applied Physics Lab
Download as MP4

NASA's STEREO-A spacecraft, with its unique vantage point away from Earth, observed the Sun's outer atmosphere as Parker Solar Probe flew through it in November 2018, giving scientists another perspective on structures in this region.
Credits: NASA/STEREO/Angelos Vourlidas

One clue lies in disturbances in the solar wind that could point to the processes that heat and accelerate the wind. These structures — pockets of relatively dense material — have been glimpsed in data from earlier missions spanning decades. They are several times the size of Earth's entire magnetic field, which stretches tens of thousands of miles into space — meaning these structures can compress Earth's magnetic field on a global scale when they crash into it.

"When structures in the solar wind reach Earth, they can drive dynamics in Earth's magnetosphere, including particle precipitation from Earth's radiation belts," said Nicholeen Viall, a space scientist at NASA's Goddard Space Flight Center in Greenbelt, Maryland, who presented new findings on solar wind structures from Parker Solar Probe at the AGU meeting. Particle precipitation can cause a range of effects, like setting off the aurora and interfering with satellites.

Near the Sun, Parker Solar Probe made better-than-ever measurements of these solar wind structures, using both imagers to take pictures from afar and in situ instruments to measure the structures as they pass over the spacecraft. To get a more complete picture of these solar wind structures, Viall went one step further, combining observations from Parker, satellites near Earth, and NASA's STEREO-A spacecraft to examine these structures from multiple angles.​

STEREO-A carries an instrument called a coronagraph, which uses a solid disk to block out the bright light of the Sun, letting the camera capture images of the relatively faint outer atmosphere, the corona. From its vantage point about 90 degrees away from Earth, STEREO-A could see the regions of the corona that Parker was flying through — allowing Viall to combine the measurements in a novel way and get a better view of solar wind structures as they flowed out from the Sun. Alongside Parker Solar Probe's images, scientists now have a better view of magnetic disturbances in the solar wind.​

Parker's instruments are also shedding new light on the invisible processes in the solar wind, revealing a surprisingly active system near the Sun.

"We think of the solar wind — as we see it near Earth — as very smooth, but Parker saw surprisingly slow wind, full of little bursts and jets of plasma," said Tim Horbury, a lead researcher on Parker Solar Probe's FIELDS instruments based at Imperial College London.

Horbury used data from Parker Solar Probe's FIELDS instruments — which measure the scale and shape of electric and magnetic fields near the spacecraft — to examine in detail one particularly odd event: magnetic "switchbacks," sudden clusters of events when the solar magnetic field bends back on itself, first described with Parker Solar Probe's initial results on Dec. 4, 2019.​

The exact origin of the switchbacks isn't certain, but they may be signatures of the process that heats the Sun's outer atmosphere, the corona, to millions of degrees, hundreds of times hotter than the visible surface below. The cause of this counterintuitive jump in temperature is a longstanding question in solar science — referred to as the coronal heating mystery — and is closely related to questions about how the solar wind is energized and accelerated.

"We think the switchbacks are probably related to individual energetic energy releases on the Sun — what we call jets," said Horbury. "If these are jets, there must a very large population of small events happening on the Sun, so they would contribute a large fraction of the total energy of the solar wind."

A look inside solar storms

Along with the solar wind, the Sun also releases discrete clouds of material called coronal mass ejections, or CMEs. Denser and sometimes faster than the solar wind, CMEs can also trigger space weather effects on Earth, or cause problems for satellites in their path.

CMEs are notoriously hard to predict. Some of them are simply not visible from Earth or from STEREO-A — the two positions where we have instruments capable of seeing CMEs from afar —  because they erupt from parts of the Sun out of view of both spacecraft. Even when they are spotted by instruments, it's not always possible to predict which CMEs will disturb Earth's magnetic field and trigger space weather effects, as the magnetic structure within the cloud of material plays a crucial role.

Our best shot at understanding the magnetic properties of any given CME relies on pinpointing the region on the Sun from which the CME exploded — meaning that one type eruption called a stealth CME poses a unique challenge for space weather forecasters.

Stealth CMEs are visible in coronagraphs — instruments that look only at the Sun's outer atmosphere — but don't leave clear signatures of their eruption in images of the Sun's disk, making it difficult to ascertain from where, exactly, they lifted off.

But during Parker Solar Probe's first solar flyby in November 2018, the spacecraft was hit by one of these stealth CMEs.

"Flying close to the Sun, Parker Solar Probe has a unique chance to see young CMEs that haven't been processed from traveling tens of millions of miles," said Kelly Korreck, head of science operations for Parker's SWEAP instruments, based at the Smithsonian Astrophysical Observatory in Cambridge, Massachusetts. "This was the first time we were able to stick our instruments inside one of these coronal mass ejections that close to the Sun."

In particular, Korreck used data from Parker's FIELDS and SWEAP instruments to get a snapshot of the internal structure of the CME. SWEAP, the mission's solar wind instruments, measures characteristics like velocity, temperature, and electron and proton densities of the solar wind. These measurements not only provide one of the first looks inside a CME so close to the Sun, but they may help scientists learn to trace stealth CMEs back to their sources.

Another type of solar storm consists of extremely energetic particles moving near the speed of light. Though often related to CME outbursts, these particles are subject to their own acceleration processes — and they move much faster than CMEs, reaching Earth and spacecraft in a matter of minutes. These particles can damage satellite electronics and endanger astronauts, but their speed makes them more difficult to avoid than many other types of space weather.

These bursts of particles often, but not always, accompany other solar events like flares and CMEs, but predicting just when they'll make an appearance is difficult. Before particles reach the near-light speeds that makes them hazardous to spacecraft, electronics and astronauts, they go through a multi-stage energization process — but the first step in this process, near the Sun, hadn't been directly observed.

As Parker Solar Probe traveled away from the Sun in April 2019, after its second solar encounter, the spacecraft observed the largest-yet energetic particle event seen by the mission. Measurements by the energetic particle instrument suite, ISʘIS, have filled in one missing link in the processes of particle energization.

"The regions in front of coronal mass ejections build up material, like snowplows in space, and it turns out these 'snowplows' also build up material from previously released solar flares," said Nathan Schwadron, a space scientist at the University of New Hampshire in Durham.

Understanding how solar flares create populations of seed particles that feed energetic particle events will help scientists better predict when such events might happen, along with improving models of how they move through space.

This trail of dust grains peppers Earth's atmosphere when our planet intersects with Phaethon's orbit each December, burning up and producing the spectacular show we call the Geminids. Though scientists have long known that Phaethon is the parent of the Geminids, seeing the actual dust trail hasn't been possible until now. Extremely faint and very close to the Sun in the sky, it has never been picked up by any previous telescope, despite several attempts — but WISPR is designed to see faint structures near the Sun. WISPR's first-ever direct view of the dust trail has given new information about its characteristics.​ 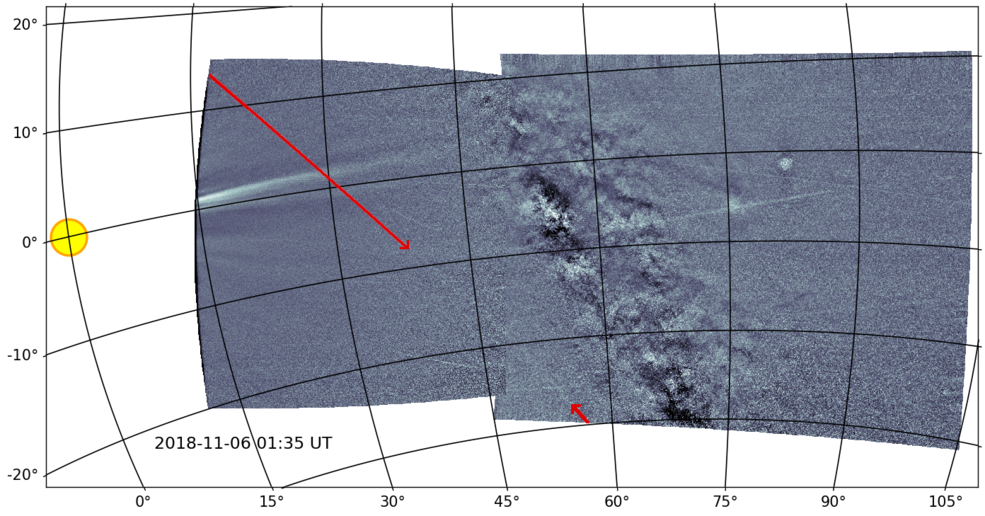 "We calculate a mass on the order of a billion tons for the entire trail, which is not as much as we’d expect for the Geminids, but much more than Phaethon produces near the Sun," said Karl Battams, a space scientist at the U.S. Naval Research Lab in Washington, D.C. "This implies that WISPR is only seeing a portion of the Geminid stream – not the entire thing – but it’s a portion that no one had ever seen or even knew was there, so that’s very exciting!”

With three orbits under its belt, Parker Solar Probe will continue its exploration of the Sun over the course of 21 progressively-closer solar flybys. The next orbit change will occur during the Venus flyby on Dec. 26, bringing Parker to about 11.6 million miles from the Sun's surface for its next close approach to the Sun on Jan. 29, 2020. With direct measurements of this never-before-measured environment — closer to the Sun than ever before — we can expect to learn even more about these phenomena and uncover entirely new questions.

Parker Solar Probe is part of NASA’s Living with a Star program to explore aspects of the Sun-Earth system that directly affect life and society. The Living with a Star program is managed by the agency’s Goddard Space Flight Center in Greenbelt, Maryland, for NASA’s Science Mission Directorate in Washington. Johns Hopkins APL designed, built and operates the spacecraft.