Since 29 November 1989 to April 1991 numerous witnesses were collected by SOBEPS about observations that were said to be UFOs.

I did think about this problem and I tried to define criterions who permit to analyze the data coming from the witnesses.

The second criterion is to submit to calculus the numerical estimations made by the witnesses in order to detect coherence or con- tradiction. These numerical data may not be separated from the other elements in the witness to avoid apparent coherence.

In the subjective data you have to place: estimations of speed, of distance, of acceleration, stationarity, position above a building far away, shapes who are more often being imagined than really seen.

In the objective data you may find: real measurement of the apparent diameter (angular diameter) that is the only data who can be determined by one unique witness, the positions of the lights and their colour, the lack of noise or a noise level higher than the noise of the auto engine or the noise of the city.

The radar detections, very few, could be considered as objective but you have to take in account false detections impossible to eliminate because due to various physical causes.

All the numerical data, objective or subjective, must be used in calculus to determine or test their coherence.

In the observations, made in good faith by the witnesses, I could find the enormous influence from the medias on the people be- haviour and on the result of their insistence on the abnormal nature from what they observe. The parallelism between the mass of media data in the newspapers and the number of UFOs declarations is evident. The statistic study of the Belgian wave shows a highly meaningful correlation coefficient of + 0,95. This result does not take in account the effect of Radio and TV who were also speaking of the observations.

Why the media did not inform about the scientific methods to obtain usable data?

After having examined many cases of the Belgian wave and consulted the two SOBEPS books « Vague d’ovnis sur la Belgique”, VOB1 and VOB 2, my conclusions were “There is no proof that ET engines have flied above Belgium during the 17 months, November 1989 to April 1991.”

What I discovered is that in the SOBEPS analysis is that the witnesses declarations were considered as “objective data” but they were “subjective data”.

All the witnesses, whatever their social and educational level, said they were able, without making measures, to estimate distances, speed, accelerations, altitude, positions above far away points or above buildings, to restore the timing of the observation days after, to give the azimuth of the observation, and so one. The use of social or educational high level was added to improve the description of the observation but it is a false argument!

The fact to accept these data as objective conduct to false conclusions.

Numerous witnesses declarations show that people are confusing “apparent move” with “real move”, “apparent speed” with “real speed”. They give dimensions for an engine by comparing it to a nearby object omitting to take account of the fact they are at dif- ferent distances. 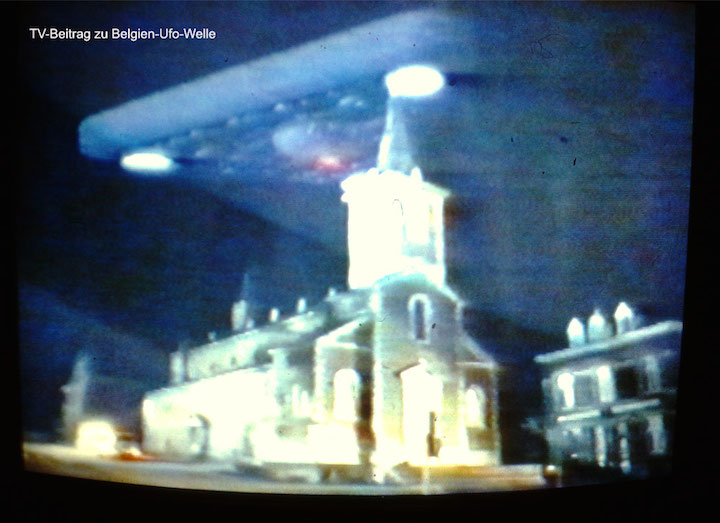 And moreover the principal picture from the Belgian wave on the cover of VOB1 and VOB 2 was a hoax. This fact is hidden by SOBEPS and Cobeps. Why?

And moreover the witnesses immediately assert that what they see cannot be a plane or a planet or a star, so they conclude for engine with extraordinary capacities that cannot be terrestrial engines without having really analyzed the observations.

All these remarks may be done for the cases in other country than Belgium.
My general conclusion is there are too many types of confusion in this problem. The UFO problem seems to be more a fact of society than a real UFO problem.