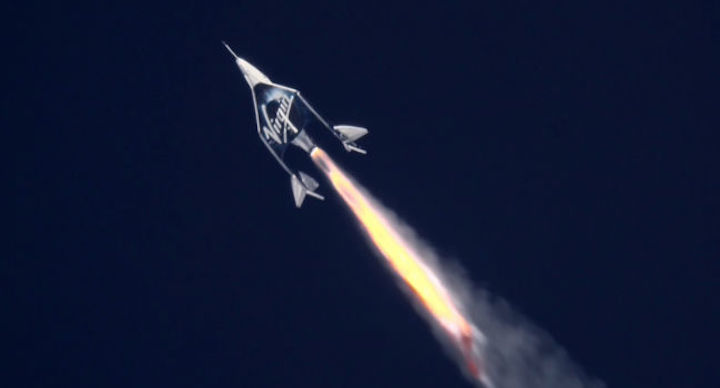 Nearly a month has passed since Virgin Galactic became a publicly traded company on the New York Stock Exchange, opening trading at $11.75 a share. Since that time the stock has had a rough ride, falling to under $7.50 a share as of Tuesday morning and losing more than a third of its value under the SPCE symbol.

Although the offering provides investors a unique opportunity to purchase stock in a space-tourism company involved in human spaceflight, there are questions about the viability of Virgin Galactic's business model and ability to profitably send thousands of humans safely on suborbital space rides.

However, the firm's new chairman, venture capitalist Chamath Palihapitiya, recently suggested that the company's long-term profitability may come more through travel than space tourism. At the Phocuswright travel industry conference last week, Palihapitiya spoke about his interest in point-to-point travel on Earth.

"As an investor, in order to build something that can send people to space and back, what you are really doing is validating a bunch of very difficult technical concepts," he said. "When we start commercial operations, we will be the only company in the world who will be flying paid passengers at hypersonic speeds."

Palihapitiya contrasted Virgin's rocket-powered SpaceShipTwo, which can travel at several multiples of the speed of sound, with that of the Concorde, which at its maximum velocity flew about twice the speed of sound, and only over the ocean away from land. By contrast, he said, SpaceShipTwo could make a trip from Los Angeles to Shanghai in less than two hours.

He also suggested that the idea of point-to-point suborbital travel is not in some distant, hazy future but within the near-term plans of the company. "When you think about that world, that world will be five to 10 years away," he said.

To date, Virgin has invested about $1 billion into developing its suborbital spaceship, he said.

Developing hypersonic travel around Earth would be a remarkable innovation, and Virgin is not the only company trying—Elon Musk has talked of using his much larger Starship vehicle that SpaceX is developing for the same purpose. There likely would be a more substantial market for rapid travel around the Earth than a few minutes of weightlessness in space, an experience Virgin plans to begin offering consumers in 2020.

But it also represents a huge challenge—getting the technology to actually work, making it safe, convincing regulators to allow spaceflights near populated areas, and finally bringing costs down to something that more than a handful of the ultra-wealthy can afford. It is, however, nice to see someone trying.

Raumfahrt - Virgin Galactic’s real goal may be point-to-point travel around Earth "That world will be five to 10 years away."
658 Views
Created with page4