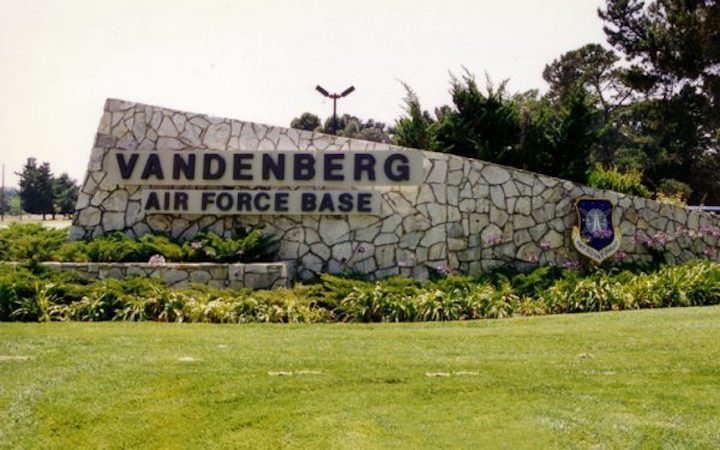 With a new Space Age set to take off, leaders at Vandenberg Air Force Base have made some moves to welcome the rocket manufacturers by penciling out launch sites and designating military land for offices, hangars or control centers.

“We might look back at this era that we’re in right now and say that’s the Entrepreneurial Space Age,” said Thomas Stevens, launch technical director for the 30th Operations Group at Vandenberg. “It seriously might just be that. We’re right at the cusp, kind of at the beginning of it. It’s exciting times.”

Stevens, who has worked at the base since the 1980s, spoke about Vandenberg’s vision as a “spaceport of the future” on Thursday night during the Economic Alliance of Santa Barbara County annual dinner and future forum program at Hotel Corquein Solvang.

More than 150 people attended the event, where the Technology Innovation Award was given to Santa Maria-based test lab Oilfield Environmental & Compliance Inc., or OEC. Founder and laboratory director Julius Carstens accepted the award.

In addition to Stevens’ keynote speech, Steven Franck, founder and chief executive officer of Pale Blue Dot Ventures, provided a feature presentation about efforts to create an educational and entertainment facility in Lompoc.

Stevens said a group at the base has worked for about a year to craft a plan, including identifying multiple projects amounting to an investiment of $100 million to position Vandenberg for its spaceport of the future. 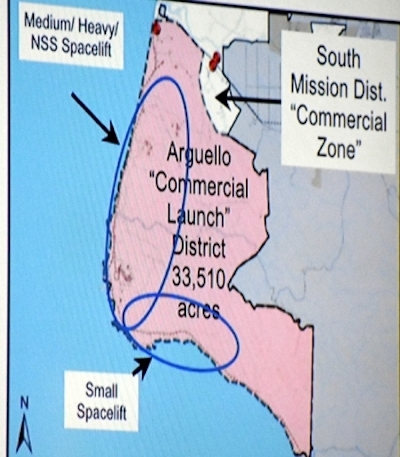 An arrow at the top right points to Vandenberg Air Force Base land to be designated for offices, hangars or other facilities for commercial space firms. Arrows at the left show areas of the South Base to be designated for rocket launch sites. (Janene Scully / Noozhawk photo)

“The Department of Defense, the Air Force, nobody’s going to afford that alone,” Stevens said, adding that funding efforts will focus on federal, state and local sources with an eye on public-private partnerships.

He added that it would be difficult at this time to estimate the potential number of new jobs at Vandenberg.

Since the late 1950s, Vandenberg has been the nation’s western spaceport, home to about 2,000 rocket and missile launches that often occurred under a cloak of secrecy. Even as the military has eased some Cold War-era secrecy, commercial space operators have chafed at Vandenberg restrictions, especially compared to East Coast launch operations.

The idea of the Air Force opening up land to accommodate private space firms is a big change from two decades ago, when the military provided lukewarm reactions to similar ideas as local leaders lobbied to lure commercial space missions to Vandenberg and stop them from going to a non-American launch site.

In a major philosophical switch, Vandenberg now wants to create “a mission district” or commercial development zone on land near Highway 246 and outside the base’s strict security entrances, effectively removing a key challenge of operating at the base.

“The idea we had is for these new launch service providers if they have to develop something like an administrative building, maybe a storage facility or a command-and-control center for their pad down on South Base, this would be the area they would have that developed,” Stevens said.

It would involve relocating the South Base gate and perimeter security so that the companies could have facilities nearby without hassling the headaches of accessing the secure area.

“Where that parcel is is not necessarily where it will be tomorrow,” Stevens said while showing a map proposing land south of Ocean Avenue. 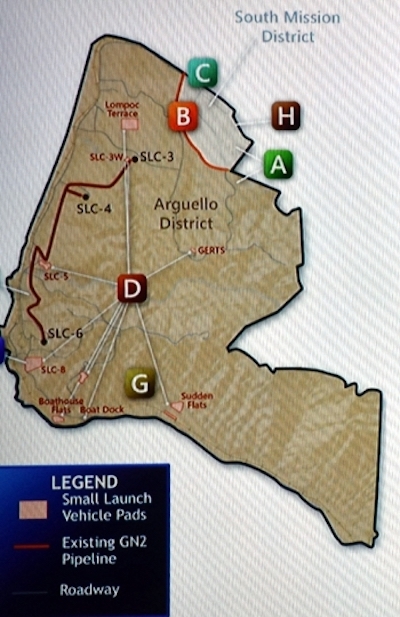 Stevens said it’s not clear what approach, such as a lease or another tool, would allow the firms to develop on military property.

“I’m not here tonight to figure all that out," he said. "These are ideas at this point and time.”

With multiple companies looking to develop new rockets, Vandenberg also has started prepping for their future launch sites, including hiring a firm to complete an environmental assessment and mapping out needed improvements.

“Nobody’s going to come if they don’t have utilities to support those pads and those folks,” Stevens said.

The existing Space Launch Complex-8, currently the most southern launch facilities, would be modifed to accommodate both solid- and liquid-fueled rockets.

The future rockets range from small-lift to heavy-lift vehicles designed to carry satellites of varying sizes.

The most southern section of the base would be designated for smaller rockets, while larger rockets would still blastoff from existing space launch complexes on the northern section of South Base.

“When these companies come, they will have a good start to avoid that tens-of-thousands-of-dollars investment and 18-month hit on their schedule,” Stevens said. “As long as they envelope that EA, they would get a categorical exclusion and be done with that fairly quickly.

“This was a way to enable and to attract the small-lift providers.”