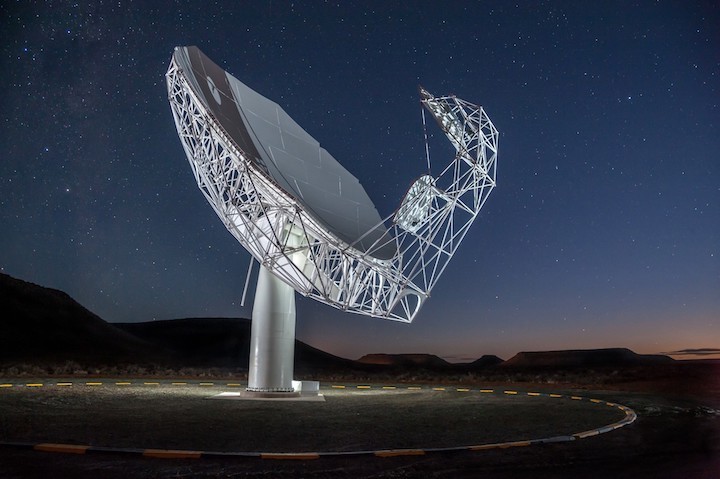 Scientists using the MeerKAT radio telescope have discovered a unique and previously-unseen flare of radio emission from a binary star in our galaxy.

The MeerKAT radio telescope in the Northern Cape of South Africa has discovered an object which rapidly brightened by more than a factor of three over a period of three weeks. This is the first new transient source discovered with MeerKAT and scientists hope it is the tip of an iceberg of transient events to be discovered with the telescope.

Astronomers call an astronomical event “transient” when it appears or disappears, or becomes fainter or brighter over seconds, days, or even years. These events are important as they provide a glimpse of how stars live, evolve, and die. Using an assortment of telescopes around the globe, the researchers determined that the source of the flare is a binary system, where two objects orbit each other approximately every 22 days. While the cause of the flaring and the exact nature of the stars that make up the system is still uncertain, it is thought to be associated with an active corona – the hot outermost part of the brighter star.

The source of the observed activity is located in the Southern constellation of Ara and was found to be coincident with a giant star about two times as massive as the Sun. The orbital period was determined using optical observations with the Southern African Large Telescope (SALT). Fortuitously, the star is sufficiently bright to have also been monitored by optical telescopes for the last 18 years and is seen to vary in brightness every three weeks, matching the orbital period.

“This source was discovered just a couple of weeks after I joined the team, it was amazing that the first MeerKAT images I worked on had such an interesting source in them. Once we found out that the radio flares coincided with a star, we discovered that the star emits across almost the entire electromagnetic spectrum from X-ray to UV to radio wavelengths.” said Laura Driessen, a PhD student at The University of Manchester who led this work.

Patrick Woudt, Professor and Head of the Astronomy Department at The University of Cape Town said: “Since the inauguration in July 2018 of the South African MeerKAT radio telescope, the ThunderKAT project on MeerKAT has been monitoring parts of the southern skies to study the variable radio emission from known compact binary stars, such as accreting black holes.

“The excellent sensitivity and the wide field of view of the MeerKAT telescope, combined with the repeat ThunderKAT observations of various parts of the southern skies, allows us to search the skies for new celestial phenomena that exhibit variable or short-lived radio emission.”

Professor Ben Stappers from The University of Manchester said: “The properties of this system don’t easily fit into our current knowledge of binary or flaring stars and so may represent an entirely new source class.”

This source was discovered just a couple of weeks after I joined the team, it was amazing that the first MeerKAT images I worked on had such an interesting source in them. Once we found out that the radio flares coincided with a star, we discovered that the star emits across almost the entire electromagnetic spectrum from X-ray to UV to radio wavelengths.

The MeerKAT telescope is sweeping the sky for sources that vary on timescales from milliseconds to years, and will significantly improve human understanding of the variable radio sky. The discovery of this new transient with MeerKAT demonstrates how powerful this telescope will be in the search for further new transient events.

Rob Adam, Director of the South African Radio Astronomy Observatory (SARAO) said: “Once again we see the potential of the MeerKAT telescope in finding interesting and possibly new astrophysical phenomena, as well as the power of the multi-wavelength approach to the analysis of observations.”

Dr. David Buckley from the South African Astronomical Observatory, who leads the SALT  transient follow-up programme, commented: “This is a perfect example of where coordinated observations across different wavelengths were combined to give a holistic view of a newly discovered object.

“This study was one of the first to involve coordination between two of South Africa’s major astronomy facilities and shows the way for future such work.”

'MKT J170456.2-482100: the first transient discovered by MeerKAT' by L N Driessen et al, is available on ArXiv (open-access), as well as the Monthly Notices of the Royal Astronomical Society. Laura, Manisha, Kaustubh and Ben are supported by a European Research Council (ERC) grant under the European Union's Horizon 2020 research and innovation programme (grant agreement No 694745).

Quelle: The University of Manchester