Governments and militaries have secret bases; that's just a simple fact. But usually the part that's secret only concerns what's done there; the actual existence of the facility itself is not usually in question. It's kind of hard to hide a big complex of buildings. Even NORAD's Cheyenne Mountain command center, which exists entirely inside a mountain in Colorado, is marked with plenty of obvious external infrastructure. Since governments own the land and control access, there's not really any reason to try and hide the facilities within. Satellite eyes in the sky observe everything being constructed anyway, so other governments will always know there's something there whether the final product is hidden or not. And yet, stories remain about certain secret establishments. Let's take a look at eight of these.

This super-secret military base in the UK is said to have performed all sorts of illegal and unethical human experimentation:

Real. It's there in Wiltshire, England, freely available for anyone to drive past or view on Google Earth. Porton Down was formed during World War I, a time when wars were fought with poison gas. Their main focus was to develop gas mask technology, and to create better ways of deploying gases against the enemy. Such horrible weapons as mustard gas and chlorine were routinely used here.

Porton Down's darkest legacy, and the main reason for its reputation, comes from its cold war years. At the same time that the Americans were experimenting with LSD in the MKULTRAprogram, Porton Down was doing the same, administering LSD to servicemen without their consent, in an effort to develop mind control and interrogation techniques. Human experimentation was also done, resulting in at least one death and a number of later lawsuits, using the nerve agents VX and sarin, and the endotoxin pyrexal.

And what about that favorite grandaddy of all secret bases:

Real. The biggest confusion with Area 51 is that it has nothing to do with Roswell, NM or the alleged 1947 saucer crash. They're in different states, and Area 51 hadn't even been built yet; so there wasn't much reason for any dead aliens to have been brought there. It was built in the 1950s, mainly to develop the super-secret A-12 and SR-71 reconaissance planes. Nobody actually calls it Area 51, it's usually informally called The Ranch and formally the National Classified Test Facility. Contrary to popular rumors, the military doesn't now, or in the past, deny its existence. That big word "classified" in its name simply means they don't discuss what happens there.

Much of its history has since been declassified, and nothing has really surprised anyone who works in aviation journalism. Most secret American aircraft that were classified before they became publicly known, such as the A-12, SR-71, F-117, and TACIT BLUE have been tested and developed there. That's why it's out in the middle of nowhere, safely hidden behind off-limits mountains.

A Google Earth study of Area 51 shows that activity has dropped off a lot there in recent years, probably because all the attention and budgets are shifting toward uncrewed craft.

But if the aliens weren't taken to Area 51, maybe they were taken to this alleged underground facility in New Mexico, home to gray aliens and reptilian beings:

Fictional. Despite its having been featured in a number of television shows, comic books, and novels, there is no evidence that any underground "base" of any kind exists inside Archuleta Mesa, about 5 km north of the city of Dulce, NM. It's frequently referenced on UFO websites and conspiracy websites, and usually described as a joint operation between aliens and the US military. The story began when a local UFO enthusiast, Paul Bennewitz, believed he was receiving radio transmissions from underneath the mesa in the 1970s. Within a few years, another UFO fan, Phil Schneider, claimed to have been an employee there, and has given detailed descriptions of its 7-level underground structure, its population of 18,000 aliens, and descriptions of the terrible experiments they perform on human subjects. It also supposedly has an underground train connection to Los Alamos National Laboratory, 130 kilometers away.

It's trivial to study Google Earth images of Archuleta Mesa and see that there's nothing there at all, certainly nothing like Schneider's elaborate descriptions that include surface buildings and radar installations. And that no subway exists between there and Los Alamos. It also seems a little suspicious that Phil Schneider would be freely allowed to go around talking about his supposedly top-secret job. For a great discussion of All Things Dulce, see the Skeptoid blog article on the website.

Some say that the United States maintains an underwater Area 51 in the Bahamas. It's called: 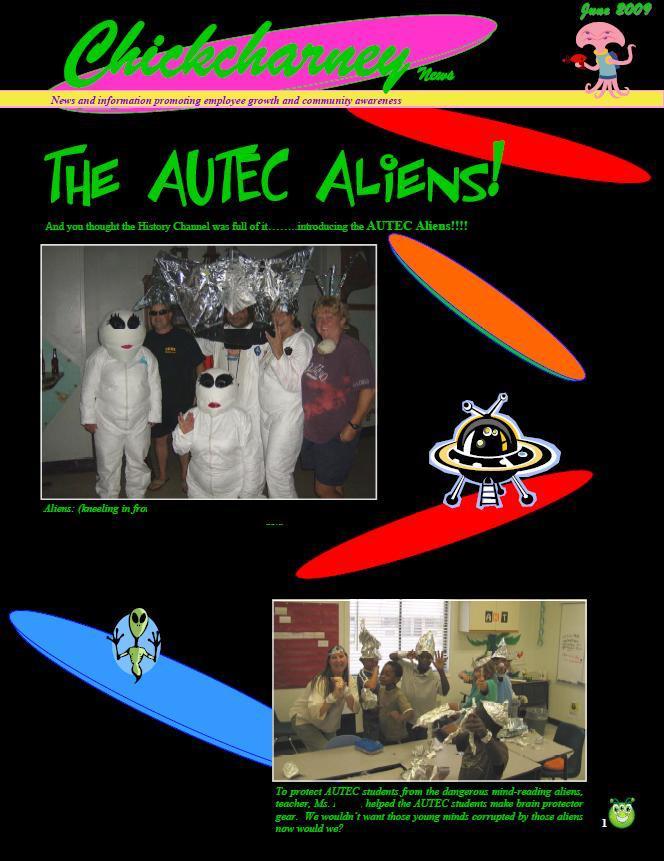 Real. The US Navy's Atlantic Undersea Test and Evaluation Center is on Andros Island in the Bahamas, and it was once hyped by History Channel's TV show UFO Hunters as being some kind of secret alien underwater thing. The employees there thought the show was pretty funny; they had a viewing party and sent me a photo of them goofing around and wearing tinfoil hats. Seriously.

AUTEC isn't underwater. It's better described as a beach resort, with a small protected harbor and a boatramp and wharf, and the obligatory beach club with cabana bar. Although the Navy does not disclose the nature of their specific projects, it does freely list their assets and capabilities. They're concerned with underwater warfare, mainly torpedos and mines. They also dabble quite a lot in uncrewed underwater vehicles, electronic warfare, and acoustics. Their principal ship is called the Range Rover; it goes out and does most of the grunt work, often at their Shallow Water Range and Minefield about 120 km north of Andros Island. It's a very thoroughly surveyed plot of real estate, and most useful when they're not dodging the cruise ships that are constantly pounding back and forth through the channel.

And while we're underwater, what do we think of the plausibility of a gigantic underground submarine base in China?

Real, although nobody outside of China really knows much about it, other than that it appears to be enormous, and is at least bigger than China's other underground submarine base at Jianggezhuang. It's plainly visible on Google Earth right outside the resort town on Sanya on Hainan Island. Both the great submarine entrance into the cliffside, and the many land entrances to the cavern, have been quite effectively camouflaged since completion, as you can see by comparing various years' imagery.

Analysts believe the underground cavern, well protected inside the mountainous peninsula inside which it's built, can house as many as 20 ballistic missile submarines. China doesn't yet have that many, and the three to five that it does have are not yet believed to have any nuclear missile capability, but surely that's only a matter of time. In any case, this is surely one of the most impressive military sites on the planet, if it were only visible.

And while we're underground, let's move a bit to the northwest and see if Russia truly does have its own underground Area 51:

Real, sort of. It's actually called Kapustin Yar and it's an occasionally active rocket launch facility, with no known underground component and no runways that would characterize a secret aircraft research facility. Back in the cold war days they did some nuclear weapon testing here, but in the fifty years since then, civilization has encroached and Kapustin Yar is no longer isolated or remote.

Kapustin Yar was also shoehorned into the limelight by the History Channel, same as they did to AUTEC. But this time, it was UFO Files instead of UFO Hunters. History Channel coined the term "Russia's Roswell" and asserted that all kinds of secret research is done there, but it's no longer a significant location. Probably the History Channel was just looking for something to sensationalize. Likely the staff there also had a viewing party and donned tinfoil hats, assuming they were able to tune in History Channel on their satellite dishes.

But getting a little bit more serious for a moment, how about this mysterious American research facility:

Real. Hangar 18 is a building at Wright-Patterson Air Force Base in Dayton, OH. It's also the title of a 1980 science-fiction movie in which the alleged alien flying saucer that crashed at Roswell was transferred to Wright-Patterson for study, where it was placed in Hangar 18.

What really is in Hangar 18? During the cold war, the US Air Force had a program called the Foreign Technology Division. FTD's job was to study and reverse engineer captured Russian aircraft, or any other foreign objects that might have fallen into their hands; but it was mainly captured Russian aircraft. FTD also had locations near Nellis Air Force Base in Nevada (home of Area 51) for testing the flight characteristics of these planes.

When the movie writers were looking for a location to store their flying saucer, they learned about the Foreign Technology Division, and thought it sounded perfect. And so Hangar 18 became a part of UFO mythology, for no reason other than a Hollywood movie.

But nothing has quite so much of a Hollywood ring to it as the final item on our list. We're going to leave the confines of the Earth and look at:

Fictional, in case you hadn't guessed. But, surprisingly, a large number of people fervently believe that there is a military base on the far side of the moon. Whole websites are devoted to it, showing lunar photographs with circles and arrows and diagrams. There is a firm community that believes the Nazis constructed a moon base on the far side, and continue to maintain it. There is an even larger community that believe aliens have a base on the moon, from which they presumably launch their UFOs. The most commonly cited claim is that the Clementine probe, which spent about three months studying the moon in 1994, supposedly sent back 1.8 million images but that 1.6 million of them were classified — presumably because they showed alien bases. Of the 170,000 said to have been released, proponents say that they were "obviously airbrushed" to hide sensitive details — again, alien bases. The only problem with these pictures is that the ones reposted by the proponents don't appear to show anything unusual at all; it seems to be a case of blobsquatching, of seeing whatever it is you want to see in an image full of random detail.

If the aliens or Nazis do have bases hidden on the far side of the moon, it's a wonder that only conspiracy theorists sitting at their computers have been able to detect them.

So the next time your friend tells you about one of these secret bases, get the jump on him by referring to this episode and beating him to the "real or fictional" punch. It's critical to know the Truth. One must always be on one's guard from the Evil Russian Chinese Alien American Nazis, and all of their evil secret bases.