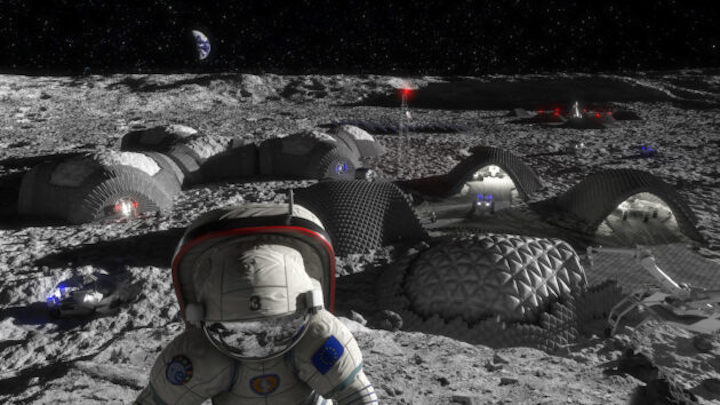 After spending five years in semi-stealth mode, a San Francisco venture called the Open Lunar Foundation is talking about its plan to create a settlement on the moon at a cost in the range of $5 billion.

“At $5B, it’s not only achievable within current NASA budgets, it offers the tantalizing possibility that a single passionate individual could fund the entire program as their legacy!” Silicon Valley venture capitalist Steve Jurvetson said today in a tweet.

Details about the campaign came to light in a Bloomberg News report, which said Jurvetson provided the nonprofit foundation’s initial funding. Open Lunar currently has a “war chest” of about $5 million, with aspirations of raising more funding for hardware as well as policy initiatives, Bloomberg’s Ashlee Vance reported.

The idea of having a nonprofit group lead the charge for a moon settlement, as opposed to a government program, may sound a bit airy-fairy — particularly since it’s not coming directly from the likes of SpaceX CEO Elon Musk or Amazon CEO Jeff Bezos, founder of the Blue Origin space venture.

But this is not just any run-of-the-mill nonprofit group: Jurvetson, for example, was the investor to whom Musk turned when SpaceX nearly went bankrupt in 2008, and he continues to be a big SpaceX supporter. Will Marshall and Robbie Schingler, co-founders of the Planet satellite venture, are part of the Open Lunar campaign. Jessy Kate Schingler, a software engineer and entrepreneur who also happens to be Robbie Schingler’s wife, is listed as the main contact on Open Lunar’s IRS forms.

Open Lunar’s other luminaries include Chris Hadfield, the retired Canadian astronaut known for his rendition of David Bowie’s “Space Oddity” on the International Space Station; and Pete Worden, the former director of NASA’s Ames Research Center and the current chairman of the Breakthrough Prize Foundation (which is backed by Israeli-Russian billionaire Yuri Milner).

Jurvetson said the idea got its start in 2014 during a weekend retreat he organized.

Since then, the Open Lunar group has been talking about the potential for small-scale robotic missions that could serve as precursors for a lunar settlement effort. Meanwhile, NASA and the White House have been fleshing out plans for a multibillion-dollar drive to put astronauts on the moon by 2024.

“Our highest ambition is catalyzing and enabling a peaceful and cooperative lunar settlement,” Chelsea Robinson, the chief of operations and staff for Open Lunar, was quoted as saying. “At this time when there are so many commercial and government actors advancing their efforts on the moon, we are excited to demonstrate a civic approach to participation.”

The idea has a lot in common with the European Space Agency’s “Moon Village” concept, which calls for various players on the lunar stage to coordinate efforts to create moon settlements. And it also calls to mind Jeff Bezos’ vision of building a city at the moon’s south pole, facilitated by robotic construction crews.

Musk has surely been kept up to date on Jurvetson’s plans. Back in 2014, the Open Lunar group was talking about creating “Moon Base Alpha,” and Musk used the same term in 2017 during a moon-centric update of his space vision.

“We should have a lunar base by now,” Musk said at the time. “What the hell is going on?”

It’s going to take a lot more than a $5 million war chest to make a mark on the moon. Maybe even more than $5 billion, for that matter. But considering Open Lunar’s connections, the campaign just might work.