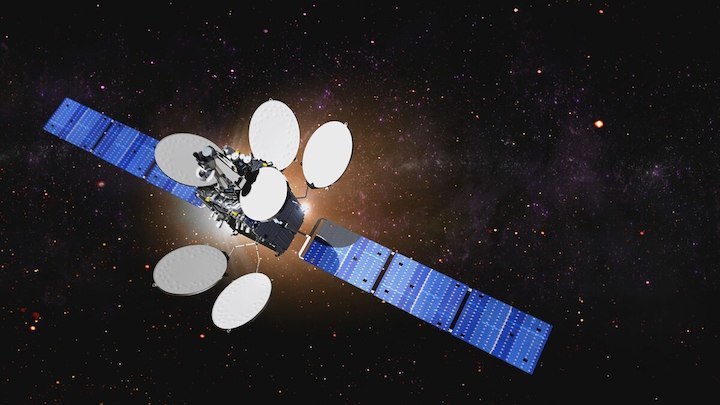 A Russian satellite has sidled up to yet another satellite in geostationary orbit, reigniting concerns that it could be stealing data or could cause a collision.

Since launching in September 2014, a Russian satellite known as Luch or Olymp has caused friction in the national security space community as it traverses across geostationary orbit. Geosynchronous satellites are separated into wide segments of space in order to avoid interference with each other, but Russian operators have ignored that setup with Luch, preferring instead to travel through the orbit, creeping up on other commercial and government satellites. By invading that space and snuggling up to another satellite, some worry Luch is theoretically able to intercept the ground signals directed at the targeted satellite, though it’s not clear from the limited amount of publicly available information if this is happening.

On Aug. 27, TS Kelso of CelesTrak, which tracks and provides orbital information, reported that Luch was now approaching an Intelsat satellite.

Each day, Kelso reviews a list of all satellites that are moving in geostationary orbit. Most of the time, what Kelso sees are satellites drifting a bit in their assigned orbit, relocating to a new area or even being decommissioned. But knowing Luch’s history of invading other satellites’ space, Kelso kept an eye out as it moved and took notice when it stopped moving again ― right next to Intelsat 17. According to the Secure World Foundation’s Global Counterspace Capabilities report released in April, Luch has stopped briefly in 17 different longitudes in the last five years.

But little is known about Luch. The Russian government hasn’t been forthcoming with information about the secretive space vehicle and officials have not discussed their plans for the satellite. Attempts by commercial satellite companies to contact the Russians about the satellite have reportedly proven fruitless.

According to Todd Harrison, director of the aerospace security project at the Center for Strategic and International Studies, the United States’ understanding of Luch is also limited due to its location and the lack of public information about the satellite.

“It’s about 22,000 miles above the surface of the earth. So it’s not something we can see with great fidelity, even with a powerful telescope,” said Harrison. “But what we can do is observe it’s behavior, and it’s been up there for several years.”

“What we’ve observed is this satellite moves around the geostationary belt and it will sidle up close to other satellites and stay there for a while, and then move along to other satellites,” explained Harrison. “So that suggests that it’s some sort of inspection or data collection vehicle.”

Brian Weeden, director of program planning for the Secure World Foundation, a nonprofit focused on sustainability in space, agreed.

“In general, what we’re seeing from the U.S., Russia and China so far [...] are growing interest in two activities related to national security. One is collecting intelligence and the other is space situational awareness,” said Weeden. “Our best guess for what Luch is doing is some form of electronic intelligence collection.”

Kelso added that Luch is moving on to new satellites faster than it used to.

“It looks like initially, the ‘visits’ were many months long but have gotten shorter over time,” he said.

While Kelso didn’t know every satellite Luch had visited, he said a number of them belonged to Intelsat, a major commercial satellite operator.

Intelsat did not respond to a request for comment.

One of the biggest concerns for operators who see Luch approaching their satellite is the possibility that Luch will be able to steal their transmissions. Because signals from earth to a geostationary satellite are broad, another satellite operating close enough to the intended recipient could pick up that signal as well.

However, it’s not immediately clear whether Luch is actually intercepting that data, making it difficult for operators to retaliate or cry foul or whether it is simply wreaking havoc. And while concern over data collection is real, Harrison added that to date observers have seen no offensive capability. That means that beyond encryption, there’s little that companies can do to protect their satellites or data--if they even need protecting.

“Just inspecting is not offensive. It’s not inherently destabilizing, but, you know, it does make people uncomfortable when the country doing the inspection is a potential adversary, like Russia,” said Harrison.

The only plausible response operators have is to encrypt the data passing through a targeted satellite, he said.

“Always encrypt everything,” said Harrison. “Encrypt, encrypt, encrypt. It may seem obvious, but if satellite operators think that any of the data they’re transmitting to or from their satellites or between satellites is going to be safe without encryption, they’re wrong.”

But even if there is no malicious intent behind Luch’s activities, Kelso warned that the game the Russians are playing is inherently risky.

“I am very concerned about LUCH (OLYMP)’s activities. I realize there is likely a larger geopolitical game being played here, but getting close to another satellite in orbit without any way to communicate intent is a recipe for disaster,” he said.

Satellite operators think they know exactly where their satellites are, but Kelso noted that there is a high degree of uncertainty when tracking an object that high in orbit. Additionally, operators can make navigation decisions based on different sets of data, meaning one satellite can zig while another zags or stands still. Differing delays in information only further complicate matters, leading to increased risks of collision. These factors compound with a satellite like Luch, where the operators decline to communicate with other operators.

“It’s only a matter of time before something goes wrong if operators don’t work together to share orbital data and communicate intent (upcoming maneuvers),” said Kelso. “It will only take one operator doing the wrong thing at the wrong time to jeopardize everything in GEO, so we all need to work together.”

A major issue in the debate over Luch is that the existing legal framework makes it difficult to call out the Russians for this activity. There are no widely accepted norms of behavior that apply to this situation and there’s no legal framework banning this sort of activity.

Part of the reason no norms have been developed is that Russia isn’t the only nation operating satellites that appear to be inspection vehicles. The United States runs the Geosynchronous Space Situational Awareness Program, where observational satellites operating in geostationary orbit can fly closer to unknown objects to provide a closer look. China also has its own inspection satellite, though Harrison noted that unlike Luch, the satellite only appears to sidle up to other Chinese satellites. Complicating matters further is that there are some benign activities these inspection satellites can be up to.

“This is one of the challenges that’s out there for the international community--to start to establish norms of how close is too close to get to another object in GEO?” said Harrison.