The VMS Eve taxis on the runway at Spaceport America. (Adolphe Pierre-Louis/Albuquerque Journal)

The company is now finishing the rocket’s interior cabin, where customers will be strapped in for the flight to space before unbuckling to float in microgravity and take in spectacular views of the Earth’s curvature. 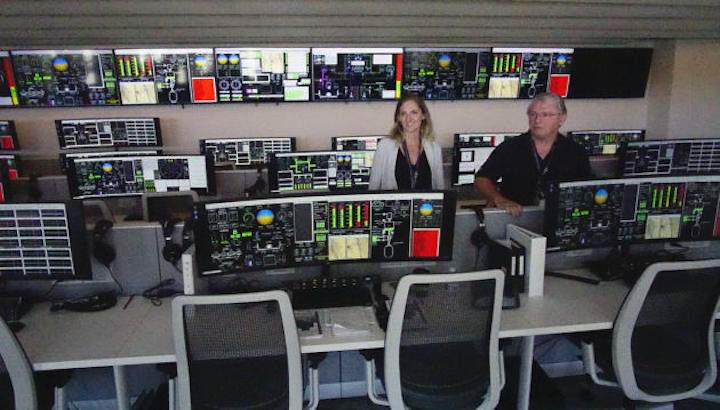 “We’re putting a lot of effort into the seats and associated hardware,” Whitesides said. “We’re also working on the liners on the vehicle’s cabin walls to add some special touches in design that will make the whole journey a thoughtful experience. It’s generally all safety and experience-centered work now to provide an amazing experience for our astronauts.”

With the rocket technology fully developed and proven, Virgin Galactic has moved to a new stage in its path to commercial service that’s focused on installing all operations in New Mexico.

It’s still unclear when commercial flights to space will begin.

But the company took a major leap forward in mid-August, when it flew the WhiteKnightTwo mothership, called Eve, to Spaceport America for permanent parking at Virgin Galactic’s new Gateway to Space operations center, which it officially opened on Aug. 14.

WhiteKnightTwo will carry the SpaceShipTwo passenger rocket on its underbelly part of the way to space. At about 45,000 feet, the spaceship detaches from the mothership and fires its motors to shoot to the edge of space at about 264,000 feet, or 50 miles up.

The company expects the passenger rocket to join the mothership in New Mexico in a few months, departing from its birth nest at Mojave Space and Air Port in Southern California, where Virgin Galactic is headquartered and the company’s engineering and manufacturing subsidiary, The SpaceShipCo, is located.

“The work (on SpaceShipTwo) is progressing well,” Whitesides said. “We hope to finish up that work before the end of the year. At that point, Eve will fly back to Mojave to pick up the spaceship and return to New Mexico.”

Even then, it would still be several months before tourists start boarding the Unity, since the company will conduct test flights with both the passenger rocket and mothership here before launching commercial service.

“I can’t give a specific number,” Whitesides said. “Each flight is part of a series of tests, with each one determining what’s needed on the next flight. There’s not too many left, but we do have a few flights to go.”

The company plans to eventually house up to five passenger rockets and two motherships at Spaceport America, depending on customer demand. The hangar at Virgin Galactic’s Gateway to Space is built to house all seven ships together.

The company is now building out the fleet, with two more passenger rockets under development in Mojave. One of them is fairly advanced, and could start test flights next year.

The company just completed the wing for that craft, which the SpaceShipCo is building in modular fashion.

“We’ve built the wing, the fuselage and the back of the vehicle in parallel with one another,” Whitesides said. “The fuselage is nearly done, and with the wing now finished, we’re ready to bond it to the fuselage. That will happen relatively soon, and then we’ll have a big push to complete the structure.”

Having already built and flown the first Unity rocket, the company is now more focused on efficient manufacturing for its next vehicles than on technology development.

“We’re doing a better job this time of manufacturing the system as we go, building the vehicle structures and internal systems simultaneously,” Whitesides said. “With the Unity, we built the structure first and then put the systems in.”

The company is also stockpiling rocket motors, which are the only non-reusable part of SpaceShipTwo.

When Virgin Galactic begins commercial operations, it may need hundreds of engines, especially with three or more spaceships flying. It currently has eight motors stored at Spaceport America, and it’s building more engines at a rate of two per month.

“We envision a staged increase in production, hopefully getting above two motors per month by the end of the year,” Whitesides said.

For now, all Unity spaceship flights are on hold until the rocket arrives in New Mexico, allowing the company to concentrate on moving its operations here, said Virgin Galactic Commercial Director Stephen Attenborough.

“We’re in a planned down period with spaceship flights,” Attenborough told reporters who toured the new spaceport operations center in August. “After two flights to space, we’re preparing SpaceShipTwo now for commercial service. We want it in final configuration for when it arrives here.”

However, the company is conducting high- and low-altitude test flights with the WhiteKnightTwo mothership at its new home in southern New Mexico to fully prepare for commercial operations there, including coordination and communication with mission control at the Gateway to Space building.

Unlike NASA’s space shuttle, which was mostly controlled by ground-based engineers, Virgin Galactic pilots are the ones in command during flights, said Virgin Galactic President Mike Moses.

“Our pilots have all the data, so mission control here plays more of a support role providing assistance as needed,” Moses told reporters at the operations center. “It’s more of an advisory role during actual flights.”

“It’s a big milestone to get all the systems integrated at mission control such as telemetry data tracking,” Whitesides said. “During WhiteKnightTwo’s flight, the ship was talking with the ground and all that data was successfully interpreted into mission control computers. We got it all up and it’s working well.”