Such a mission would shed considerable light on our solar system's population of interstellar objects. 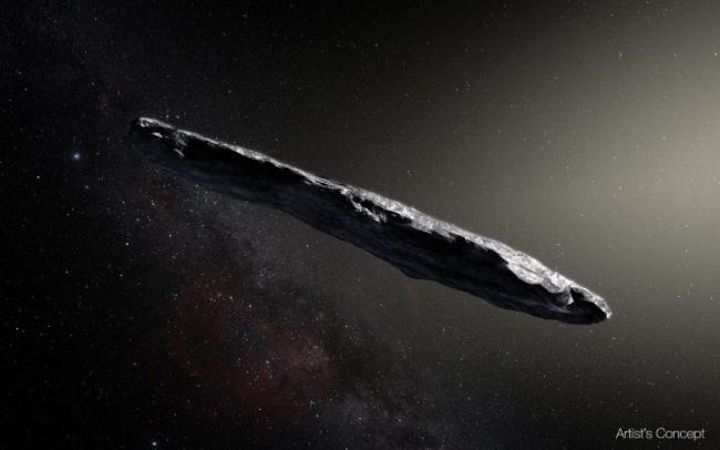 he moon might be the best place to hunt for interstellar interlopers.

A Hubble-size telescope orbiting Earth's nearest neighbor should be able to spot at least one lunar impact per year caused by interstellar meteoroids, a new study suggests.

Such work could reveal a great deal about the population of interstellar objects cruising through our solar system. Scientists know very little about these bodies at the moment, having confirmed the existence of just one: the mysterious 'Oumuamua, which was spotted in the fall of 2017.

"The value of even one impact is almost immeasurable," study lead author Amir Siraj, an undergraduate studying astrophysics at Harvard University, told Space.com.

Siraj and co-author Avi Loeb, the chair of Harvard's astronomy department, have been thinking a lot about the best ways to find more interstellar visitors. For example, the duo recently scoured the fireball database compiled by the Jet Propulsion Laboratory's Center for Near-Earth Object Studies (CNEOS), which contains information about hundreds of meteor impacts on Earth over the past three decades.

One of the CNEOS data points stood out, Siraj and Loeb found. The trajectory and blazing speed of a meteor that burned up in the sky near Papua New Guinea on Jan. 8, 2014, indicate that the object came from interstellar space, the researchers reported in a paper this past April.

That paper hasn't made it past peer review yet, largely because the CNEOS database does not report measurement error. Such information is classified; it could reveal details about the sensitivity of space-based sensors operated by the U.S. government. Siraj and Loeb were able to constrain the error bars for the January 2014 meteor — a roughly 3-foot-wide (1 meter) object they call CNEOS 2014-01-08 — thanks to two helpful colleagues with the required security clearance. But The Astrophysical Journal Letters, which is assessing the paper, has had difficulty finding a reviewer able to do the same, Siraj said. (Once that paper is published, the number of confirmed interstellar visitors to our solar system will double, to two.)

Now, Siraj and Loeb have applied this same basic idea — using a cosmic body as an interstellar-meteoroid detector — to the moon. In the new study, the pair calculated the detection potential of a telescope in lunar orbit, which would hunt for the streaking motion of incoming meteoroids as well as the bright flashes and craters generated when these bodies slam into the moon's gray dirt.

Siraj and Loeb found that a telescope with an aperture of at least 6.5 feet (2 m), orbiting 62 miles (100 kilometers) above the lunar surface, would likely spot at least one interstellar impact per year. (For comparison, NASA's iconic Hubble Space Telescope has a primary mirror 7.9 feet, or 2.4 m, wide.)

That rate is far from set in stone, the researchers stressed. After all, it's based on an imperfect estimate of the interstellar-object population within our solar system.

"We're dealing with such a small amount of calibration — 'Oumuamua and this other tentatively discovered meteor — so there's a lot of uncertainty there," Siraj said. "But something the size of Hubble should get us in the ballpark where we should see one per year."

As with CNEOS 2014-01-08, these special strikes could be identified based on the speed and trajectory of the impactors, the researchers wrote. And this information would lead to other insights.

"Just these basic measurements would allow us to constrain the 3D velocity, the mass and, most importantly, the density [of the impactors]," Siraj said. "This would allow us to see, for example, if a mini 'Oumuamua struck the lunar surface — we'd be able to figure out, is it icy, is it rocky, et cetera."

Spectroscopic observations of the plume generated by such strikes could also reveal key details of the impactors' composition, he added.

And it wouldn't be a tragedy if the telescope failed to spot any interstellar impacts, Siraj said. This would be a valuable data point in itself, suggesting that the population of interstellar objects in our solar system is much smaller than scientists had thought.

Putting it out there

The main goal of the new study, which Siraj and Loeb just submitted to the journal Acta Astronautica, is to get the idea out and see if it generates any interest, Siraj said. So the duo hasn't calculated an estimated price for the moon-orbiting telescope.

But the researchers said such a mission could be done quite cheaply, especially if the Department of Defense (DoD) is willing to donate a space telescope to the cause.

Such hope is not unfounded; the DoD's National Reconnaissance Office has already given two spare, Hubble-size space telescopes to NASA, after all. One of the scopes will be used for the space agency's WFIRST mission, and NASA is apparently still deciding what to do with the other one.

And there are reasons for the DoD to care about interstellar meteoroids slamming into the lunar surface. "This could actually serve as a laboratory for understanding hypervelocity impacts, which is something that DoD has been pouring a ton of research funding into," Siraj said.