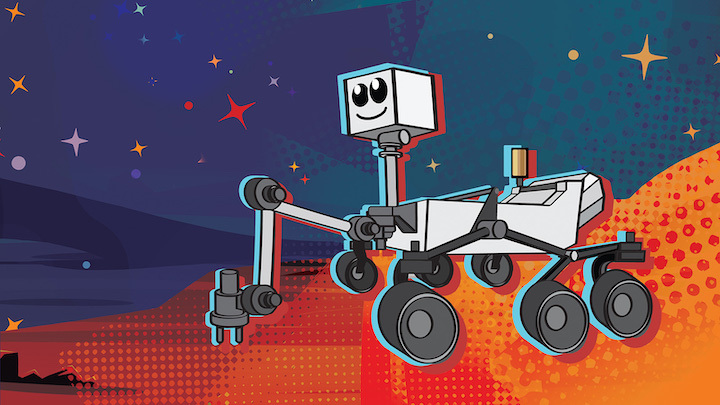 Red rover, red rover, send a name for Mars 2020 right over! NASA is recruiting help from students nationwide to find a name for its next Mars rover mission.

Starting Tuesday, Aug. 27, K-12 students in U.S. public, private and home schools can enter the Mars 2020 Name the Rover essay contest. One grand prize winner will name the rover and be invited to see the spacecraft launch in July 2020 from Cape Canaveral Air Force Station in Florida.

The Mars 2020 Rover is preparing to launch to the Red Planet in July 2020, but it doesn't have a name yet. We're asking K-12 students across the United States to send in essays with their best name ideas by Nov. 1, 2019.

The Name the Rover contest is part of NASA's efforts to engage students in the STEM enterprise behind Mars exploration and inspire interest in science, technology, engineering and mathematics.

"This naming contest is a wonderful opportunity for our nation's youth to get involved with NASA's Moon to Mars missions," said NASA Administrator Jim Bridenstine. "It is an exciting way to engage with a rover that will likely serve as the first leg of a Mars Sample return campaign, collecting and caching core samples from the Martian surface for scientists here on Earth to study for the first time."

The Mars 2020 rover is a 2,300-pound (1,040-kilogram) robotic scientist that will search for signs of past microbial life, characterize the planet's climate and geology, collect samples for future return to Earth, and pave the way for human exploration of the Red Planet.

"Our Mars 2020 rover has fully taken shape over the past several months, as the project team installed various components onto the chassis: the computer brain and electronics; wheels and mobility system; robotic arm; remote sensing mast; the seven science instruments; and finally, the sample caching system," said George Tahu, Mars 2020 program executive. "All that's missing is a great name!"

See NASA's next Mars rover quite literally coming together inside a clean room at the Jet Propulsion Laboratory. This behind-the-scenes look at what goes into building and preparing a rover for Mars, including extensive tests in simulated space environments, was captured from March to July 2019.

As part of the final selection process, the public will have an opportunity to vote online on the nine finalists in January 2020. NASA plans to announce the selected name on Feb. 18, 2020 - exactly one year before the rover will land on the surface of Mars.

The naming contest partnership is part of a Space Act Agreement between NASA, Battelle of Columbus, Ohio, and Future Engineers of Burbank, California, in educational and public outreach efforts.

Register to be a Judge

NASA is seeking volunteers to help judge the thousands of contest entries anticipated to pour in from around the country. U.S. residents over 18 years old who are interested in offering approximately five hours of their time to review submissions should register to be a judge at: