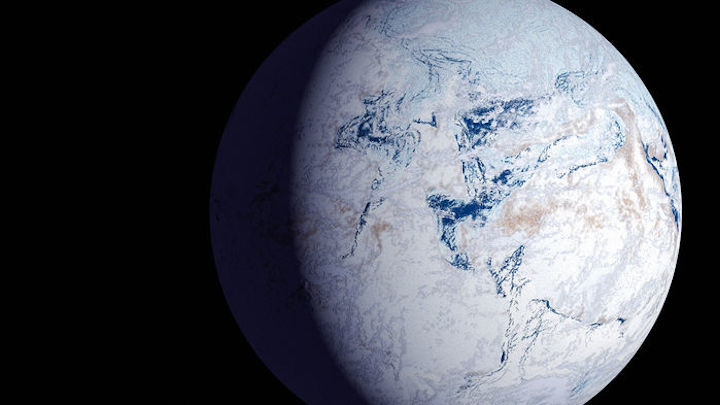 BARCELONA, SPAIN—Barlangi Rock, an ancient hill in the outback of Western Australia, is dimpled by the quarries of Aboriginal people who chiseled its fine-grained rocks into sharp tools. Now, geologists have added a much deeper layer of history to those rocks by showing they were forged 2.229 billion years ago, when an asteroid crashed into our planet. The finding makes Yarrabubba crater, the 70-kilometer-wide scar left by the collision, Earth’s oldest.

The geologists who reported the date last week, here at the Goldschmidt geochemistry conference, also point out a conspicuous coincidence: The impact came at the tail end of a planetwide deep freeze known as Snowball Earth. They say the impact may have helped thaw Earth by vaporizing thick ice sheets and lofting steam into the stratosphere, creating a powerful greenhouse effect.

“It’s intriguing to think what a moderate to large impact event could do in this time period,” says Timmons Erickson, a geochronologist at NASA’s Johnson Space Center in Houston, Texas, who led the study. “The temporal coincidence is striking,” agrees Eva Stüeken, a geobiologist at the University of St. Andrews in the United Kingdom. But she and other researchers are skeptical that Yarrabubba—which is just one-third the size of the crater left by the dinosaur-killing impact 66 million years ago—could have had such a profound effect on the climate. Still, Stüeken says, paleoclimate studies should consider the possible role of such violent collisions. “It forces us to think more about these impacts and these potential feedbacks.”

Earth likes to cover its tracks. Erosion from wind and water, as well as the churn of plate tectonics, mean impact craters are scarcer the further one goes back in time—even though the cratered surfaces of the moon and Mars show impacts were actually more common in the tumultuous early solar system. Prior to the dating of Yarrabubba crater, the oldest known impact was the Vredefort Dome, a 2.02-billion-year-old feature in South Africa that, at 300 kilometers wide, is the world’s largest.

Western Australia is a good place to look for old craters because it contains the Yilgarn Craton, one of Earth’s oldest surviving pieces of crust. In 2001, a magnetic survey near Yarrabubba revealed circular features in the bedrock, although no crater rim can be seen at the surface. And when Francis Macdonald, a geologist at the University of California (UC), Santa Barbara, took a close look at rocks from the region, he found the signatures of an impact’s shock: microscopic planar patterns in mineral crystals and shatter cones, horsetail fracture patterns up to 1 meter long. Some of the melted and recrystallized rocks from beneath the crater—including Barlangi Rock—had also survived. “We’re looking at the roots of it,” Macdonald says. In a 2003 discovery paper, he and his colleagues named the crater after the local sheep shearing station. They knew the impact was ancient, but could not give it a firm date.

In 2014, Erickson saw an opportunity while on his way to field work elsewhere in Western Australia. He camped near Barlangi Rock and crisscrossed the hill with a sledgehammer, filling a backpack with a dozen chunks of rock. In a laboratory tub, he zapped the rocks with 100,000 volts of electricity, breaking them up into their component minerals without damaging delicate textures.

Next, Erickson had to sift for crystals suitable for dating. Like a gold prospector, he used pans to float off less dense quartz and feldspar, and he extracted other unwanted minerals with a magnet. Finally, with tweezers and a microscope, he picked out several hundred grains of zircon and monazite, each smaller than the width of a human hair. “You need a good podcast or music when you’re doing that,” he says.

He wanted crystals with rims that had melted and recrystallized, an assurance that the impact had reset a clock in which small amounts of radioactive uranium, trapped within the crystal, decay into lead. He mounted some of the best crystals in epoxy, polished them down to a fresh face, and vaporized spots on the rims with an ion beam. A mass spectrometer measured the abundance of uranium and lead in the vapor; from the proportions and the known half-life of the uranium, he and his colleagues could calculate an age. They ended up with a date of 2.229 billion years old, plus or minus 5 million years.

That puts the impact at a turbulent time in Earth’s history. Life had existed for more than 1 billion years, but photosynthetic life—cyanobacteria living in shallow waters—was a recent evolutionary invention, one that triggered a sharp rise in atmospheric oxygen about 2.4 billion years ago. Previously, high levels of methane in the atmosphere had generated a greenhouse effect that warmed the planet. But many scientists think the methane was destroyed by chemical reactions with Earth’s first ozone, produced when ultraviolet light from the sun struck the oxygen molecules. They suspect loss of methane sent Earth crashing into a set of severe and long-lived ice ages, even at low latitudes. Three or maybe four of these icy episodes took place between 2.45 billion and 2.22 billion years ago, which means Australia might have been covered in ice at the time of the Yarrabubba impact.

Scientists have assumed that volcanic eruptions ended the ice ages, by belching carbon dioxide and warming the planet. But Erickson and his colleagues speculate that Yarrabubba could have helped. They modeled the effect of a 7-kilometer-wide asteroid striking an ice sheet between 2 and 5 kilometers thick. They found the impact could have spread dust thousands of kilometers, darkening ice and enhancing its ability to absorb heat. It also would have sent half a trillion tons of steam into the stratosphere—orders of magnitude more water vapor than in today’s stratosphere—where it would have trapped heat.

Andrey Bekker, a geologist at UC Riverside, doubts that the water vapor would have persisted for the centuries needed to thaw Earth. “I’m not convinced that by itself it could do this job,” he says. Christian Koeberl, an impact expert and the director general of the Natural History Museum in Vienna, shares those doubts, but says paleoclimate researchers need to model the effects explicitly.

If the Yarrabubba impact did thaw the planet, allowing life to reclaim icy continents and oceans, it wouldn’t be the first example of life benefiting from a cosmic blow, Koeberl says. Although the public tends to associate impacts with extinctions, he notes that impacts 4 billion years ago could have jump-started life. Asteroids delivered phosphorus, a key nutrient, and the impacts also created the protected, energy-rich hydrothermal systems where some biologists believe life began. “Impacts can be bringers of life, impacts can be destroyers of life,” he says.