The spacecraft docked with the ISS at 6:08am Moscow time, several minutes earlier than initially planned 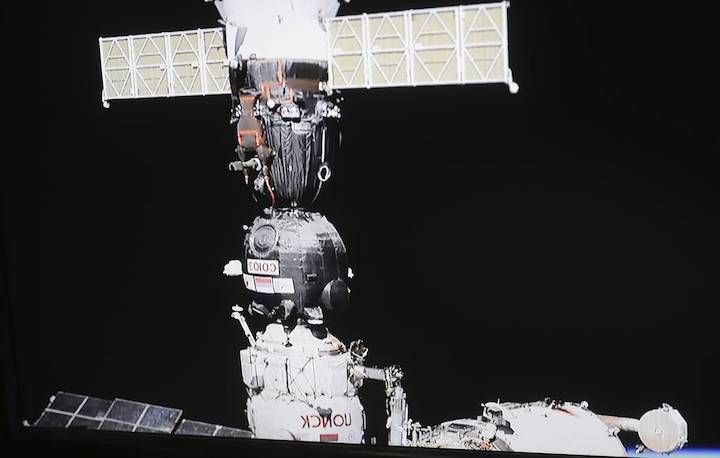 The Soyuz MS-14 manned spacecraft with the Fedor robot (Skybot F-850) has successfully docked with the Zvezda module of the International Space Station (ISS), a TASS correspondent reported from the Mission Control Center.

"Docking is registered," a commentator at the Mission Control Center said.

The spacecraft docked with the ISS at 6:08am Moscow time, several minutes earlier than initially planned.

The first docking attempt was planned for 8:31am Moscow time on August 24 but the Soyuz MS-14 failed to dock with the Poisk module. 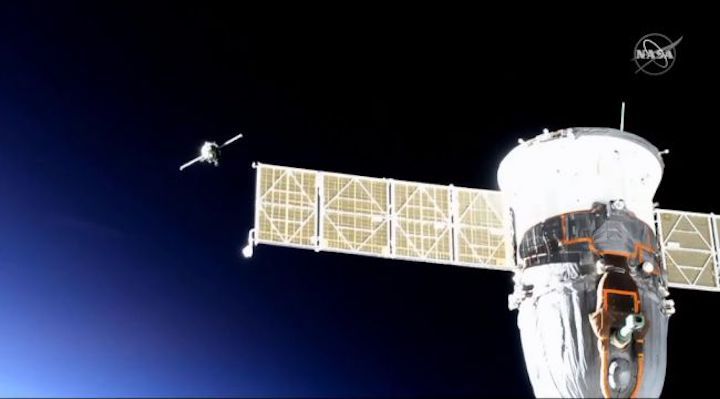 For the first time in history, a Russian Soyuz spacecraft linked up with the International Space Station without a human in the driver's seat.

Called Soyuz MS-14, the unpiloted spacecraft docked at the space station late Tuesday (Aug. 26), parking itself at a port on the aft end of the outpost's Russian Zvezda service module. It was the second attempt by Soyuz MS-14 to dock at the station after a Saturday try ended with a surprise abort.

"The second time was the charm," NASA spokesperson Rob Navias during live commentary just after the Soyuz docked. "A flawless approach." The space station was sailing 260 miles (418 kilometers) over eastern Mongolia when the Soyuz docked at at 11:08 p.m. EDT (0308 GMT).

Soyuz MS-14 is the first Soyuz capsule to visit the space station without a human crew. Russian space officials launched the spacecraft on a test flight on Aug. 22using an upgraded Soyuz 2.1a rocket, a booster typically used to fly robotic Progress cargo ships. Roscosmos wanted to test an uncrewed Soyuz capsule with the upgraded rocket before actual crewed launches begin in March 2020.

While there was no human crew onboard Soyuz MS-14, the spacecraft was by no means empty.

Russia's space agency Roscosmos packed the spacecraft with 1,450 lbs. (658 kilograms) of food and other vital supplies to help keep the station crew stocked with the supplies. The centerpiece, however, is the humanoid Skybot F-850. 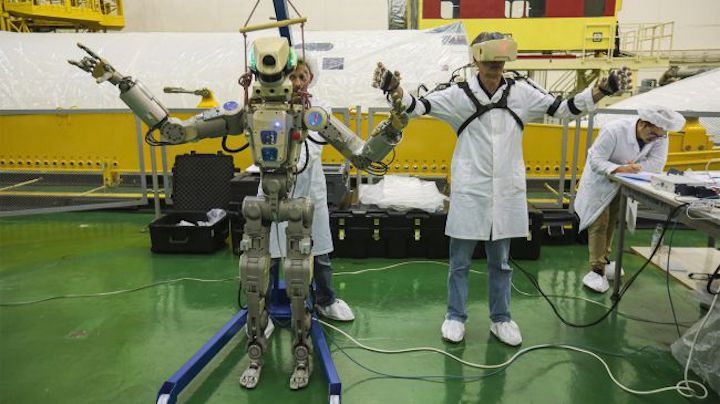 Russia's space agency Roscosmos shows off the humanoid robt Skybot F-850 during tests on July 28, 2019 ahead of its launch on a Soyuz MS-14 spacecraft.

The 6-foot-tall (1.8 meters) robot sat in the commander's seat on Soyuz MS-14 during launch and recorded all manner of conditions, such as forces and vibrations, to give engineers an idea of what humans would experience on Soyuz 2.1a launches. Cosmonauts on the space station will also test the robot in space to see how it could make the crew's life easier.

Eventually, Roscosmos envisions the robot could one day help explore the surface of another world. 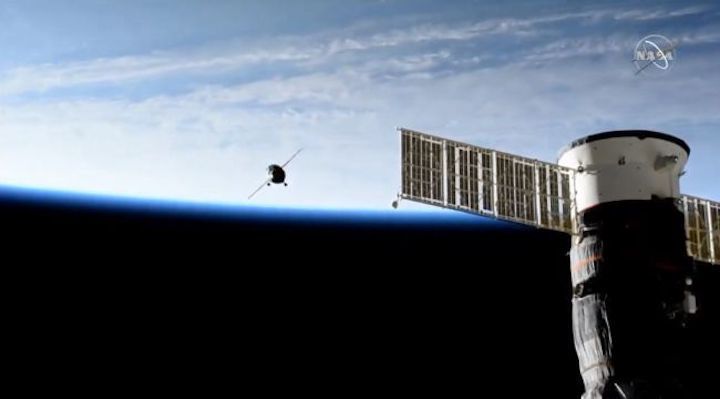 Sunday's Soyuz docking comes after busy weekend of spacecraft shuffling aboard the International Space Station to make way for the MS-14 spacecraft. The spacecraft was originally scheduled to dock at the station's top-mounted Poisk module on Saturday, but a problem with the automated rendezvous system on the module forced Soyuz to abort.

In order to clear the Zvezda module docking port for Soyuz MS-14, Russian cosmonaut Alexander Skvortsov and two crewmates (Andrew Morgan of NASA and Luca Parmitano of the European Space Agency) moved their own Soyuz spacecraft — called Soyuz MS-13 — to the Poisk port. Skvortsov flew the Soyuz manually, avoiding the rendezvous system problems seen by Soyuz MS-14, which does not have a human crew to take manual control.