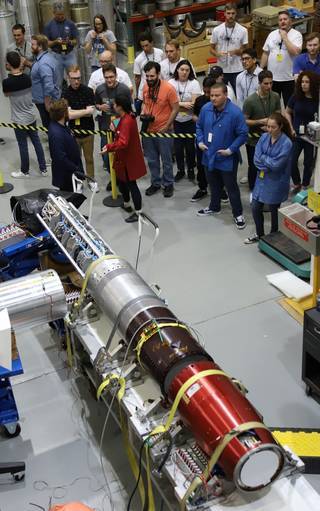 RockSat-X students wait for environmental testing of their experiments.

University and community college students from across the country will complete their summer vacation on high note as they send their projects into space on a NASA two-stage Terrier-Improved Malemute suborbital sounding rocket Aug.12, 2019, from the Wallops Flight Facility in Virginia.

The projects are a mix of technology and science experiments including developing spacecraft reentry and thermal protection systems, measuring cosmic rays and gathering organic molecules in space for DNA sequencing,

After flying to around 91 miles altitude, the payload, with the experiments, will descend by parachute and is expected to land 15 minutes after launch in the Atlantic Ocean, about 64 miles off the Virginia coast. The experiments and any stored data will be provided to the students later in the day following sea recovery of the payload.

The NASA Visitor Center at Wallops will open at 4:30 a.m. on launch day for viewing the flight.  The rocket launch is expected to be only seen from the Eastern Shore of Virginia and Maryland.

Live coverage of the mission is scheduled to begin at 5:10 a.m. on the Wallops the Wallops Facebook site.

The experiments are being flown through the RockSat-X program in conjunction with the Colorado Space Grant Consortium. RockSat-X is the most advanced of NASA’s three-phase sounding rocket program for students.  The RockOn launches are at the entry level, then progress to the intermediate level RockSat-C missions and then RockSat-X.

Giovanni Rosanova, chief of the Sounding Rockets Program Office at Wallops, said, “RockOn and RockSat have shown to be valuable programs in developing the skills of our future scientists, technicians and engineers. As NASA returns to the Moon and goes on to Mars, these students will be needed in our future workforce to carry on these ambitious missions, as well as science missions to understand the planet Earth and our universe.” 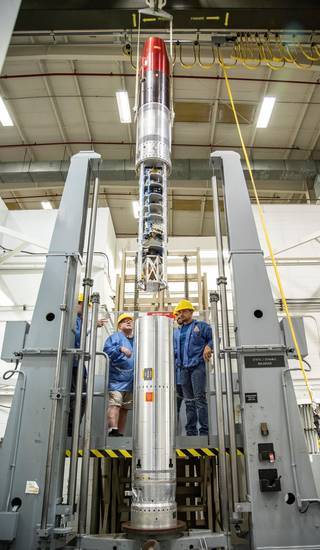 The experiments are mated with the payload for balance testing.

RockSat-X is part of a three-tier program that introduces secondary institution students to building experiments for space flight and requires them to expand their skills to develop and build more complex projects as they progress through the programs. RockSat-X experiments are flown approximately 20 miles higher in altitude than those in  the RockOn and RockSat-C programs, providing more flight time in space

“This will be the ninth flight of a RockSat-X payload,” said Chris Koehler, director of the Colorado Space Grant Consortium. “The program has provided opportunities for more than 1000 students to participate in developing an experiment for spaceflight, which has been beneficial as they have joined such organizations as NASA, the Jet Propulsion Laboratory, Space-X, Lockheed Martin, DigitalGlobe, Northrop Grumman and many others after graduation.”

The experiments being flown on this RockSat-X flight are:

The Debris Orbital Tumbler and Thermal Sensor (DOTTS) project is a collaboration between three community colleges in Colorado: Arapahoe Community College, Community College of Aurora, and Red Rocks Community College. Their primary experiment is to develop a cost-effective method to alter the trajectory of space debris in suborbital flight. The payload is designed to create an electrostatic field to attract small pieces of aluminum debris by charging a deployable rod with rabbit fur. Their secondary experiment is meant to expand their knowledge about an interesting discovery the team made during the launch of their 2018 experiment. They will be flying multiple pieces of 3D printed material made out of different types of plastic and in different shapes in order to better understand the effects of reentry conditions on 3D printed structures.

College of the Canyons

The goal of the Mesospheric Autorotational Payload Lander Experiment (MAPLE) is to create a versatile reentry system that uses autorotation to reduce velocity while gathering kinematic and environmental data to determine the concept’s efficiency and reliability. The team has developed a small reentry capsule that will deploy a set of fins which will cause it to rotate and subsequently slow its decent speed. The concept for this experiment was partially inspired by nature in the form of maple seeds (also called helicopter seeds) which spin around as they fall, slowing their decent.

The University of Kentucky is improving upon an experiment they flew in 2017 that tested data acquisition, communication, and thermal protection of a small reentry capsule. This year’s experiment is one of the last stages of their projects development which aims to increase the technology readiness level (TRL) of their capsule to TRL 7. The capsule includes various sensors to determine the effectiveness of their thermal protection system as well as radios to transmit data and position and a parachute to slow its decent.

The Space Characterization and Assessment of Manipulator Performance (SCAMP) II project is a continuation of their experiment that was flown in 2018 which will fly a functional robotic manipulator component in a microgravity environment to test contact stability on both hard and soft contacts. This experiment will rotate two bars at varying speeds in order to provide contact stability data for a satellite servicing robot experiment currently in progress at UMd. The moment of inertia of the two bars are changed part way through the flight through the ejection of a small mass.

The University of Nebraska Lincoln’s mission looks to further develop and streamline the mechanism for a deployable boom system started by NASA Langley Research Center. The boom is designed to be easily deployed and retracted for application in various space-based experiments. The boom is first rolled up then unrolled with a motor which allows the boom to reach its maximum extension. The tip of the boom includes sensors to measure its position and the experiment itself includes a number of cameras to record the deployment and retraction.

The University of Puerto Rico’s mission is to collect micrometeorites in the Meteor Trail at altitudes of 50-68 miles (80-110 km) in order to gather organic molecules for complete Nucleic Acids sequencing of DNA and RNA. The payload uses polyimide aerogels stored in a sealable container to collect samples of micrometeorites and organic molecules. The payload also uses a number of different cross contamination mitigation strategies prior to and during launch including the thorough cleaning of the payload and surrounding rocket skin and the use of UV-C lamps to eliminate potential contaminants.

The West Virginia Space Flight Design Challenge is a collaboration between colleges in West Virginia, New York, and NASA IV&V. Each school has its own experiment which are integrated together with an additional system that provides power and telemetry. The Hobart and William Smith Colleges are attempting to measure the temperature and vibration of their payload throughout the rocket’s flight. West Virginia State University is flying radiation, optical, and particle detectors to provide hands-on experience with designing and building space related experiments and prepare for potential future CubeSat missions by comparing component designs. West Virginia University will be flying an antenna that is capable of changing shape during flight. West Virginia Wesleyan College is flying a Geiger counter to measure the cosmic ray incident on Earth to compare with previous NASA studies. Finally, Blue Ridge Community and Technical College aims to record an accurate vibration of the rocket to provide vibrational data to future RockSat teams. 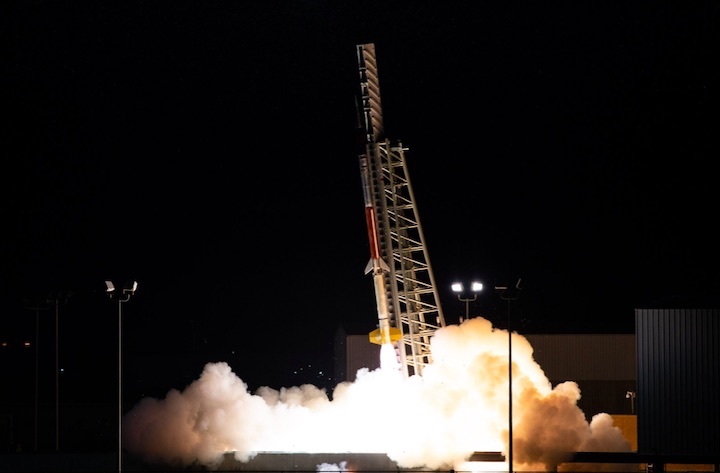 The RockSat-X mission successfully launched at 5:44 a.m. EDT from Wallops Island, Virginia. The Terrier-Improved Malemute sounding rocket reached 96 miles in altitude. The student experiments on board were successfully recovered in the Atlantic Ocean.