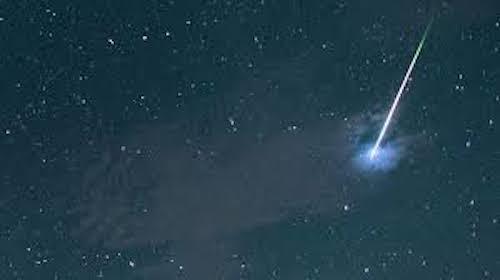 The Perseid meteor shower is back. This year, the annual sky show will peak overnight Aug. 12-13, when — weather permitting — skywatchers should be able to see about 15 to 20 shooting stars per hour in the night sky.

The Perseids this year will have to compete with light from the full moon, which tends to wash out the short-lived streaks of light the meteors create. In years when there’s no moonlight, NASA says, the Perseids typically produce more than 60 shooting stars per hour.

But the show is worth taking in despite the less-than-ideal conditions, said Bill Cooke, head of NASA's meteoroid environment office at the Marshall Space Center in Huntsville, Alabama, and a well-known meteor expert. "That's still more [meteors] than any shower you'll see except for the Geminids," he said, adding that the Perseids are known to produce unusually bright meteors known as fireballs. "It's still worth going out to look at the Perseids. It just won't be as good because of the moonlight."

The Geminid meteor shower, which returns each December, is the only shower that produces meteors at a higher rate than the Perseids, Cooke said.

The Perseid meteors are so named because they appear to come from the direction of Perseus, a large constellation in the northern sky. Like other meteor showers, they arise when small, fast-moving bits of debris from the tail of a comet smash into Earth's upper atmosphere. In this case the debris is moving at 132,000 miles per hour when it hits the atmosphere, and the comet is a particularly large one known as Swift-Tuttle, which completes one orbit of the sun every 133 years.

The central portion, or nucleus, of Swift-Tuttle is about 16 miles in diameter — making the comet more than two times bigger than the one that scientists believe struck Earth 65 million years ago and killed off the dinosaurs.

Luckily for us earthlings, there's no chance that the nucleus will collide with Earth.

To view the Perseids, astronomers recommend finding a dark place away from city lights, stretching out on the ground and simply looking up at the night sky. There's no need for telescopes or binoculars. Just be sure to give your eyes enough time to adapt to the darkness.

The best viewing should come just before dawn on Aug. 13, Cooke said.

If bad weather gets in the way where you are, you should be able to see the Perseids live on NASA's Meteor Watch Facebook page starting around 8 p.m. ET on Aug. 12.

The Perseid meteor shower is here! Perseid meteors, caused by debris left behind by the Comet Swift-Tuttle, began streaking across the skies in late July and will peak on the night of August 12.

The Perseid meteor shower is often considered to be one of the best meteor showers of the year due to its high rates and pleasant late-summer temperatures. This year’s shower, however, has unfortunate circumstance of having a full Moon right at the shower peak, reducing the meteor rates from over 60 per hour down to 15-20 per hour. But the Perseids are rich in bright meteors and fireballs, so it will still be worth going out in the early morning to catch some of nature’s fireworks.

WHEN SHOULD I LOOK?

Make plans to stay up late or wake up early the nights of August 11 to 12 and August 12 to 13. The Perseids are best seen between about 2 a.m. your local time and dawn. On the night of the 11th, the Moon will set around 3 AM, giving you about an hour of dark sky to catch the shower. However, the rates will be lower than on the peak, so don’t expect more than 20 per hour, even without the Moon. On the night of the peak (August 12-13) you will only have a scant few minutes of dark sky between moon set and twilight – not much time to see Perseids.

If those hours seem daunting, not to worry! You can go out after dark, around 9 p.m. local time, and see Perseids. Just know that you won’t see nearly as many as you would had you gone out during the early morning hours.

How can you see the Perseids if the weather doesn’t cooperate where you are? A live broadcast of the meteor shower from a camera in Huntsville, AL (if our weather cooperates!) will be available on the NASA Meteor Watch Facebook starting around 8 p.m. ET and continuing until the early hours of August 13. Meteor videos recorded by the NASA All Sky Fireball Network are also available each morning; to identify Perseids in these videos, look for events labeled “PER.”

WHY ARE THEY CALLED PERSEIDS?

All meteors associated with one particular shower have similar orbits, and they all appear to come from the same place in the sky, called the radiant. Meteor showers take their name from the location of the radiant. The Perseid radiant is in the constellation Perseus. Similarly, the Geminid meteor shower, observed each December, is named for a radiant in the constellation Gemini.

HOW TO OBSERVE PERSEIDS

If it’s not cloudy, pick an observing spot away from bright lights, lay on your back, and look up! You don’t need any special equipment to view the Perseids – just your eyes.  (Note that telescopes or binoculars are not recommended.) Meteors can generally be seen all over the sky so don’t worry about looking in any particular direction.

While observing this month, not all of the meteors you’ll see belong to the Perseid meteor shower. Some are sporadic background meteors. And some are from other weaker showers also active right now, including the Alpha Capricornids, the Southern Delta Aquariids, and the Kappa Cygnids. How can you tell if you’ve seen a Perseid? If you see a meteor try to trace it backwards. If you end up in the constellation Perseus, there’s a good chance you’ve seen a Perseid. If finding constellations isn’t your forte, then note that Perseids are some of the fastest meteors you’ll see!

Pro tip:  Remember to let your eyes become adjusted to the dark (it takes about 30 minutes) – you’ll see more meteors that way. Try to stay off of your phone too, as looking at devices with bright screens will negatively affect your night vision and hence reduce the number of meteors you see!

Astronomie - The Perseid meteor shower should be striking despite the August full moon. Here's how to watch. This year, the shooting stars peak Aug. 12.
1835 Views
Created with page4