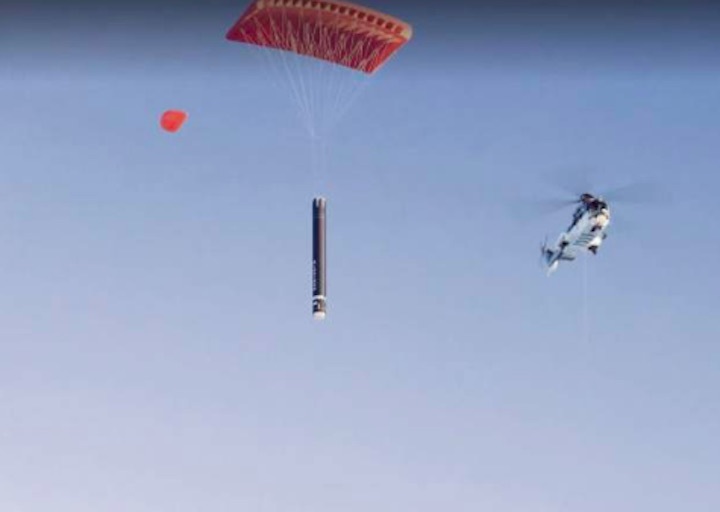 Phase two is a helicopter catching it in mid-air and transporting it to the complex.
Reusable rockets will be tested from Rocket Lab’s Mahia launch site later this year in a daring move that will see rocket stages “caught” by helicopters.

The US-based satellite launch company said it plans to recover and re-fly the first stage of its Electron launch vehicle to enable Rocket Lab to increase launch frequency by eliminating the need to build a new first stage for every mission.

The reuse plan will be implemented in two phases.

The first phase will see Rocket Lab try to recover a full Electron first stage from the ocean downrange of Launch Complex 1 (at Onenui Station) and ship it back to its production complex for refurbishment.

The second phase will entail Electron’s first stage being captured in mid-air by helicopter, then taken to Launch Complex 1 for refurbishment and relaunch.

“We’ll be recovering the stages about 700 to 900 kilometres out to sea,” a company spokeswoman said.

A major step towards Rocket Lab’s reusability plans was completed on the company’s most recent launch, the Make It Rain mission, which launched on June 29 from Launch Complex 1.

The first stage on this mission carried critical instrumentation and experiments that provided data to inform future recovery efforts.

The next Electron mission, scheduled for this month, will also carry recovery instrumentation.

“Reusing the stage of a small launch vehicle is a complex challenge, as there’s little mass margin to dedicate to recovery systems. For a long time we said we wouldn’t pursue reusability for this very reason but we’ve been able to develop the technology that could make recovery feasible for Electron.

“We’re excited to put that technology into practice.”

A 14-day launch window for Rocket Lab’s next Mahia launch will open from August 17.

The mission is manifested with satellites destined to begin a new constellation for French company UNSEENLABS, as well as more rideshare payloads for Spaceflight, consisting of a spacecraft for BlackSky and the United States Air Force Space Command.