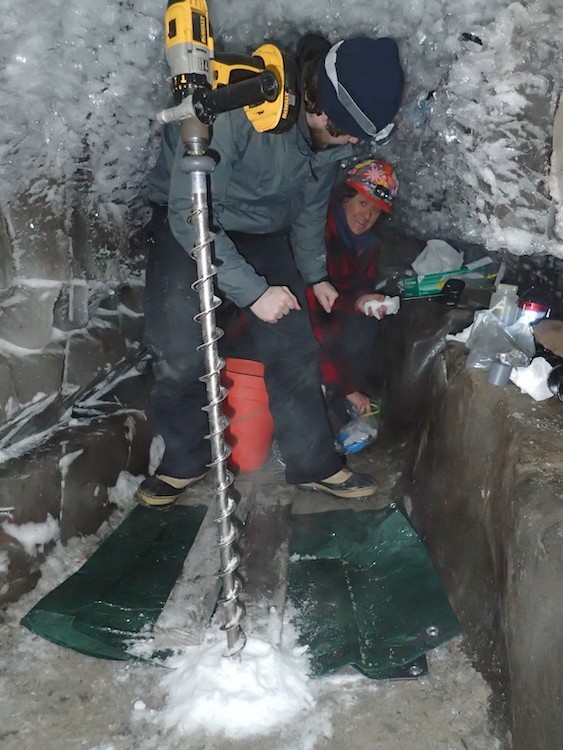 Zac Cooper and Shelly Carpenter begin to drill below the Alaskan ice tunnel toward the cryopeg and its salty subzero water. Researchers are careful to sterilize their equipment to avoid introducing contamination from above ground. The most stringent of such techniques will be needed to sample for life on other planets.Go Iwahana/University of Alaska, Fairbanks

In recent years, the idea of life on other planets has become less far-fetched. NASA announced June 27 that it will send a vehicle to Saturn’s icy moon Titan, a celestial body known to harbor surface lakes of methane and an ice-covered ocean of water, boosting its chance for supporting life.

On Earth, scientists are studying the most extreme environments to learn how life might exist under completely different settings, like on other planets. A University of Washington team has been studying the microbes found in “cryopegs,” trapped layers of sediment with water so salty that it remains liquid at below-freezing temperatures, which may be similar to environments on Mars or other planetary bodies farther from the sun.

At the recent AbSciCon meeting in Bellevue, Washington, researchers presented DNA sequencing and related results to show that brine samples from an Alaskan cryopeg isolated for tens of thousands of years contain thriving bacterial communities. The lifeforms are similar to those found in floating sea ice and in saltwater that flows from glaciers, but display some unique patterns.

“We study really old seawater trapped inside of permafrost for up to 50,000 years, to see how those bacterial communities have evolved over time,” said lead author Zachary Cooper, a UW doctoral student in oceanography.

Cryopegs were first discovered by geologists in Northern Alaska decades ago. This field site in Utqiaġvik, formerly known as Barrow, was excavated in the 1960s by the U.S. Army’s Cold Regions Research and Engineering Laboratory to explore large wedges of freshwater ice that occur in the permafrost there. Subsurface brine was eventually collected from the site in the 2000s. 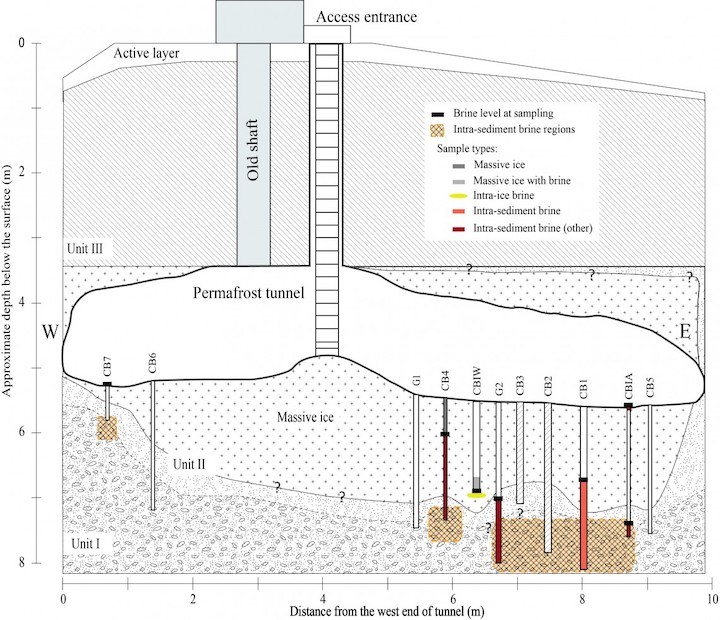 A schematic of the study site, which consists of a tunnel, excavated from a massive ice formation in the permafrost, and accessed through a narrow vertical opening. Researchers then drill below the tunnel floor to reach the cryopeg layer with its saline liquid (bottom hatched area).Shelly Carpenter/University of Washington

“The extreme conditions here are not just the below-zero temperatures, but also the very high salt concentrations,” said Jody Deming, a UW professor of oceanography who studies microbial life in the Arctic Ocean. “One hundred and forty parts per thousand — 14% — is a lot of salt. In canned goods that would stop microbes from doing anything. So there can be a preconceived notion that very high salt should not enable active life.”

It’s not fully known how cryopegs form. Scientists believe the layers might be former coastal lagoons stranded during the last ice age, when rain turned to snow and the ocean receded. Moisture evaporated from the abandoned seabed was then covered by permafrost, so the remaining briny water became trapped below a layer of frozen soil.

To access the subsurface liquids, researchers climb about 12 feet down a ladder and then move carefully along a tunnel within the ice. The opening is just a single person wide and is not high enough to stand in, so researchers must crouch and work together to drill during the 4- to 8-hour shifts.

Deming describes it as “exhilarating” because of the possibility for discovery.

Samples collected in the spring of 2017 and 2018, geologically isolated for what researchers believe to be roughly 50,000 years, contain genes from healthy communities of bacteria along with their viruses.

“We’re just discovering that there’s a very robust microbial community, coevolving with viruses, in these ancient buried brines,” Cooper said. “We were quite startled at how dense the bacterial communities are.”

The extreme environments on Earth may be similar to the oceans and ice of other planets, scientist believe.

“The dominant bacterium is Marinobacter,” Deming said. “The name alone tells us that it came from the ocean – even though it has been in the dark, buried in frozen permafrost for a very long time, it originally came from the marine environment.” 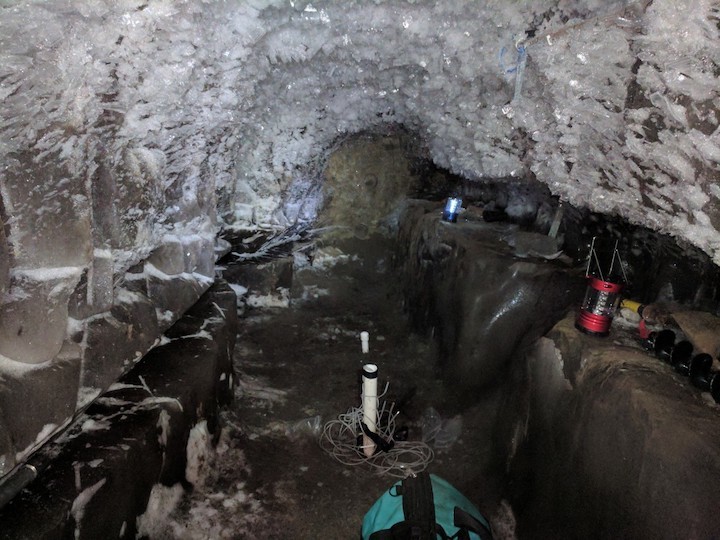 he roof of the tunnel is covered in hoar frost, spiky ice crystals that form as moisture in the air solidifies in the minus 6 degrees C environment of the tunnel. The layers below are colder. Researchers leave presterilized pipes inserted in the floor for future access to the liquid layer below.Zac Cooper/University of Washington

Mars harbored an ocean of water in the past, and our solar system contains at least a half-dozen oceans on other planets and icy moons. Titan, the moon of Saturn that NASA will explore, is rich in various forms of ice. Studying life on Earth in frozen settings that may have similarities can prepare explorers for what kind of life to expect, and how to detect it.

The research was funded by the Gordon and Betty Moore Foundation to learn how bacteria and viruses coevolve in different marine environments. Other collaborators at UW are Josephine Rapp, a postdoctoral researcher in Oceanography, Max Showalter, a doctoral student in Oceanography, and Shelly Carpenter, a research scientist in Oceanography.