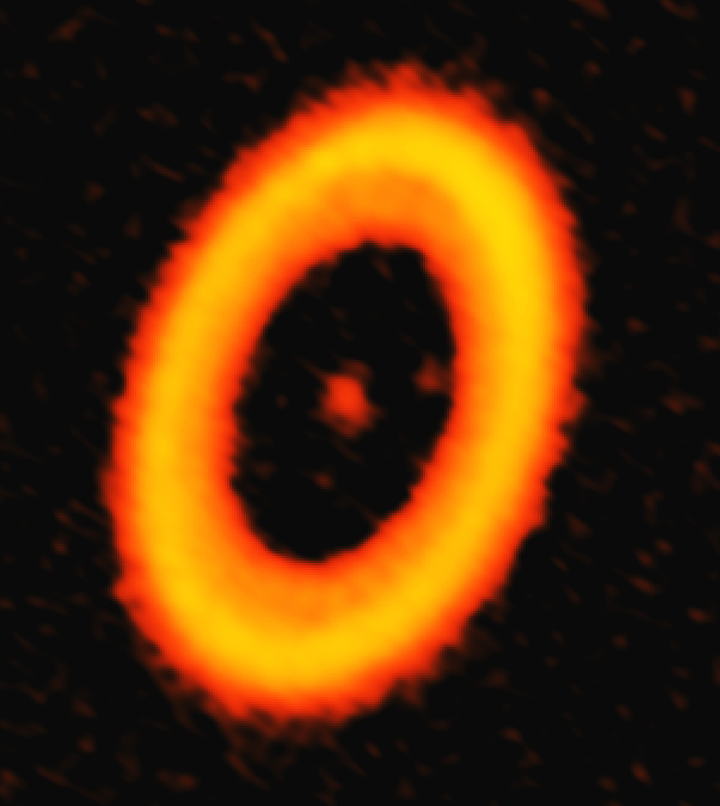 ALMA image of the dust in PDS 70, a star system located approximately 370 light-years from Earth. Two faint smudges in the gap region of this disk are associated with newly formed planets. One such concentration of dust is a circumplanetary disk, the first such feature ever detected around a distant star. 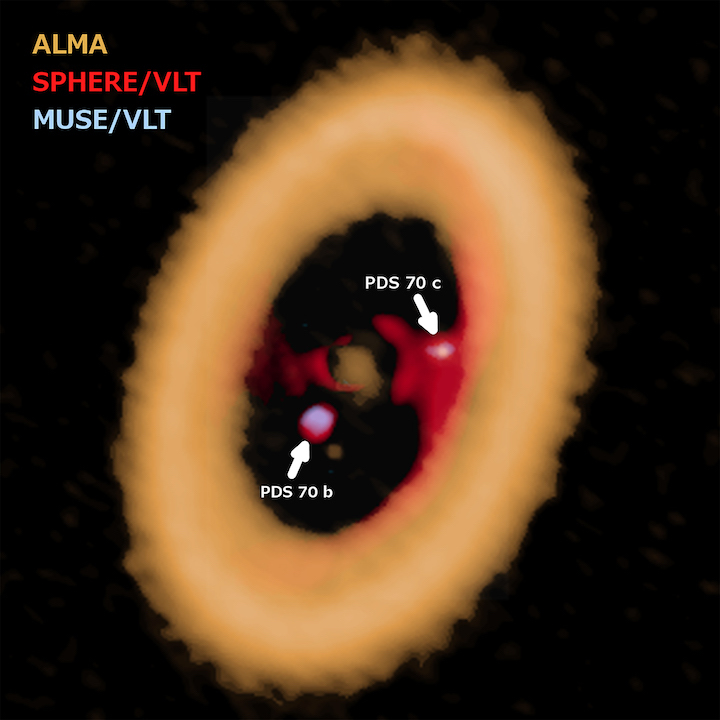 Composite image of PDS 70. Comparing new ALMA data to earlier VLT observations, astronomers determined that the young planet designated PDS 70 c has a circumplanetary disk, a feature that is strongly theorized to be the birthplace of moons.
Credit: ALMA (ESO/NAOJ/NRAO) A. Isella; ESO

have made the first-ever observations of a circumplanetary disk, the planet-girding belt of dust and gas that astronomers strongly theorize controls the formation of planets and gives rise to an entire system of moons, like those found around Jupiter.

This never-before-seen feature was discovered around one of the planets in PDS 70, a young star located approximately 370 light-years from Earth. Recently, astronomers confirmed the presence of two massive, Jupiter-like planets there. This earlier discovery was made with the European Southern Observatory’s Very Large Telescope (VLT), which detected the warm glow naturally emitted by hydrogen gas accreting onto the planets.

The new ALMA observations instead image the faint radio waves given off by the tiny (about one tenth of a millimeter across) particles of dust around the star.

The ALMA data, combined with the earlier optical and infrared VLT observations, provide compelling evidence that a dusty disk capable of forming multiple moons surrounds the outermost known planet in the system.

“For the first time, we can conclusively see the telltale signs of a circumplanetary disk, which helps to support many of the current theories of planet formation,” said Andrea Isella, an astronomer at Rice University in Houston, Texas, and lead author on a paper published in the Astrophysical Journal, Letters.

“By comparing our observations to the high-resolution infrared and optical images, we can clearly see that an otherwise enigmatic concentration of tiny dust particles is actually a planet-girding disk of dust, the first such feature ever conclusively observed,” he said. According to the researchers, this also is the first time that a planet has been clearly seen in these three distinct bands of light.

Unlike the icy rings of Saturn, which likely formed by the crashing together of comets and rocky bodies relatively recently in the history of our solar system, a circumplanetary disk is the lingering remains of the planet-formation process.

The ALMA data also revealed two distinct differences between the two newly discovered planets. The closer in of the two, PDS 70 b, which is about the same distance from its star as Uranus is from the Sun, has a trailing mass of dust behind it resembling a tail. “What this is and what it means for this planetary system is not yet known,” said Isella. “The only conclusive thing we can say is that it is far enough from the planet to be an independent feature.”

The second planet, PDS 70 c, resides in the exact same location as a clear knot of dust seen in the ALMA data. Since this planet is shining so brightly in the infrared and hydrogen bands of light, the astronomers can convincingly say that a fully formed planet is already in orbit there and that nearby gas continues to be syphoned onto the planet’s surface, finishing its adolescent growth spurt.

This outer planet is located approximately 5.3 billion kilometers from the host star, about the same distance as Neptune from our Sun. Astronomers estimate that this planet is approximately 1 to 10 times the mass of Jupiter. “If the planet is on the larger end of that estimate, it’s quite possible there might be planet-size moons in formation around it,” noted Isella.

The ALMA data also add one more important element to these observations.

Optical studies of planetary systems are notoriously challenging. Since the star is so much brighter than the planets, it is difficult to filter out the glare, much like trying to spot a firefly next to a search light. ALMA observations, however, don’t have that limitation since stars emit comparatively little light at millimeter and submillimeter wavelengths.

“This means we’ll be able to come back to this system at different time periods and more easily map the orbit of the planets and the concentration of dust in the system,” concluded Isella. “This will give us unique insights into the orbital properties of solar systems in their very earliest stages of development.” 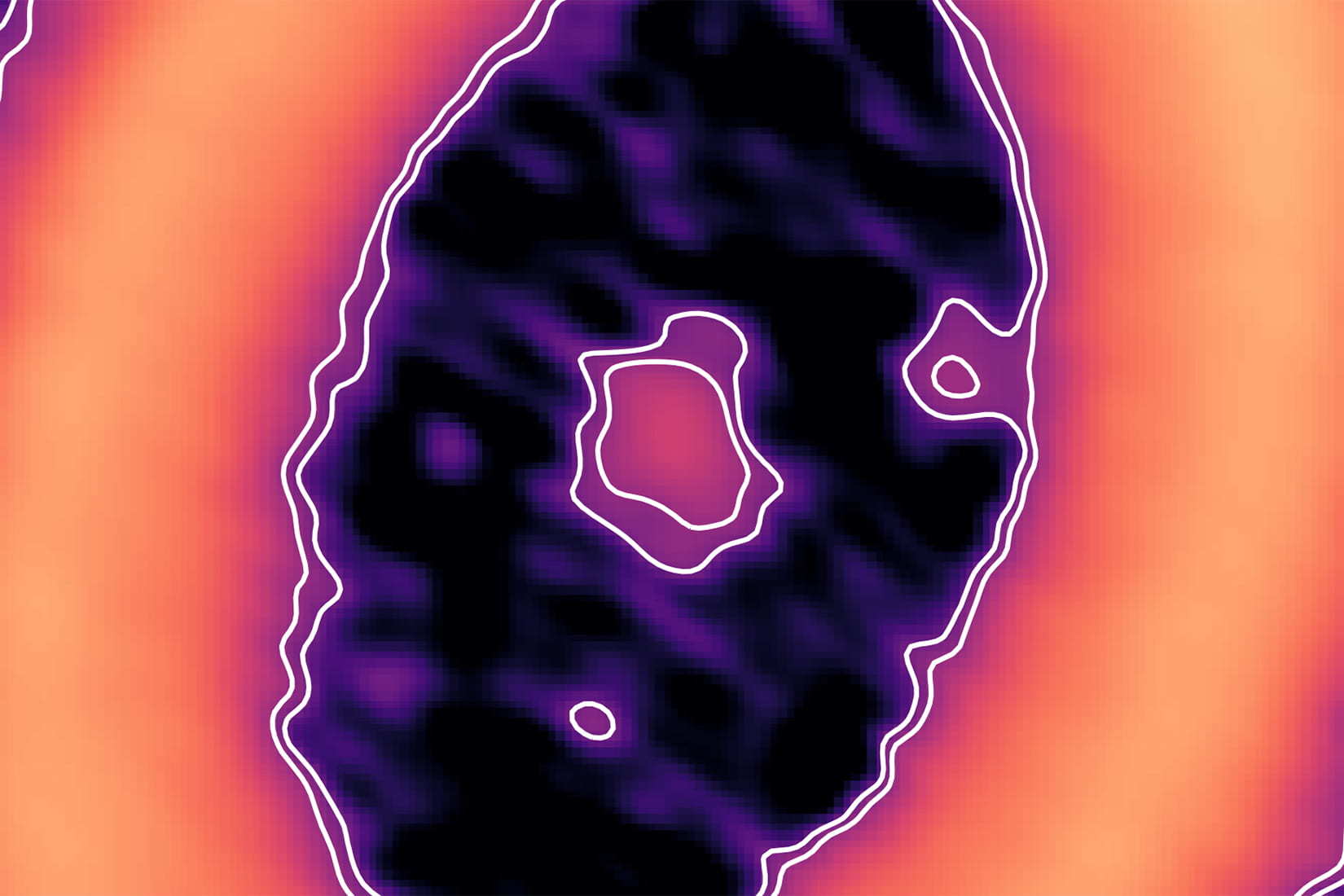 A color-enhanced image of millimeter-wave radio signals from the ALMA observatory in Chile shows a disk of gas and dust (right of center) around exoplanet PDS 70 c, the first-ever observation of the kind of circumplanetary disk that is believed to have birthed the moons of Jupiter more than 4 billion years ago. (Image courtesy of A. Isella, ALMA (ESO/NAOJ/NRAO))

Using Earth’s most powerful array of radio telescopes, astronomers have made the first observations of a circumplanetary disk of gas and dust like the one that is believed to have birthed the moons of Jupiter.

“Planets form from disks of gas and dust around newly forming stars, and if a planet is large enough, it can form its own disk as it gathers material in its orbit around the star,” Isella said. “Jupiter and its moons are a little planetary system within our solar system, for example, and it’s believed Jupiter’s moons formed from a circumplanetary disk when Jupiter was very young.”

But most models of planet formation show that circumplanetary disks disappear within about 10 million years, which means circumplanetary disks haven’t existed in our solar system for more than 4 billion years. To look for them elsewhere and gather observational evidence to test theories of planet formation, Isella and colleagues search for very young star systems where they can directly observe disks and the planets still forming inside them. In the new study, Isella and colleagues analyzed observations made by ALMA in 2017.

“There are a handful of candidate planets that have been detected in disks, but this is a very new field, and they are all still debated,” Isella said. “(PDS 70 b and PDS 70 c) are among the most robust because there have been independent observations with different instruments and techniques.”

PDS 70 is a dwarf star about three-quarters the mass of the sun. Both of its planets are 5-10 times larger than Jupiter, and the innermost, PDS 70 b, orbits about 1.8 billion miles from the star, roughly the distance from the sun to Uranus. PDS 70 c is a billion miles further out, in an orbit about the size of Neptune’s.

PDS 70 b was first revealed in 2018 in infrared light images from a planet-hunting instrument called SPHERE at the European Southern Observatory’s Very Large Telescope (VLT). In June, astronomers used another VLT instrument called MUSE to observe a visible wavelength of light known as H-alpha, which is emitted when hydrogen falls onto a star or planet and becomes ionized.

“H-alpha gives us more confidence that these are planets because it suggests they are still drawing in gas and dust and growing,” Isella said.

The millimeter wavelength observations from ALMA provide even more evidence.

“It’s complimentary to the optical data and provides completely independent confirmation that there is something there,” he said.

“There’s much that we don’t understand about how planets form, and we now finally have the instruments to make direct observations and begin answering questions about how our solar system formed and how other planets might form.”

Isella is an assistant professor of physics and astronomy and of Earth, environmental and planetary sciences at Rice and a co-investigator on the Rice-based, NASA-funded CLEVER Planets project. 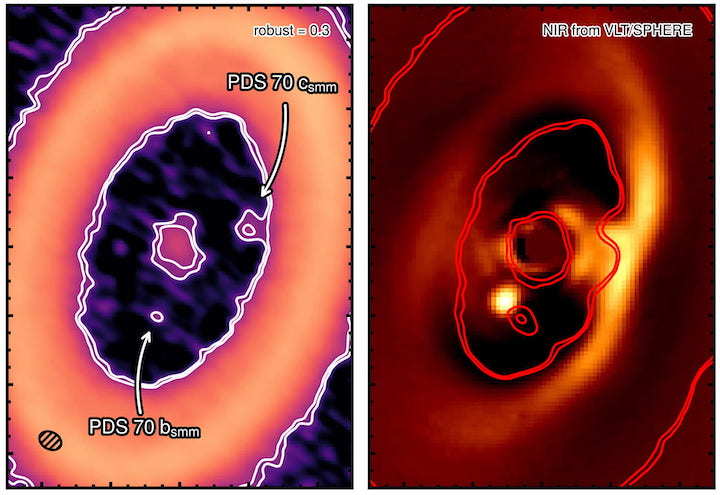 Radio astronomers using the Atacama Large Millimeter/submillimeter Array of telescopes in Chile have found a disk of gas and dust (left) around exoplanet PDS 70 c, a still-forming gas giant that was obscured from view in the 2018 infrared image (right) that first revealed its sister planet, PDS 70 b. (Image courtesy of A. Isella, ALMA (ESO/NAOJ/NRAO))