An Apollo Guidance Computer would need a billion times the age of the universe to mine a single block. 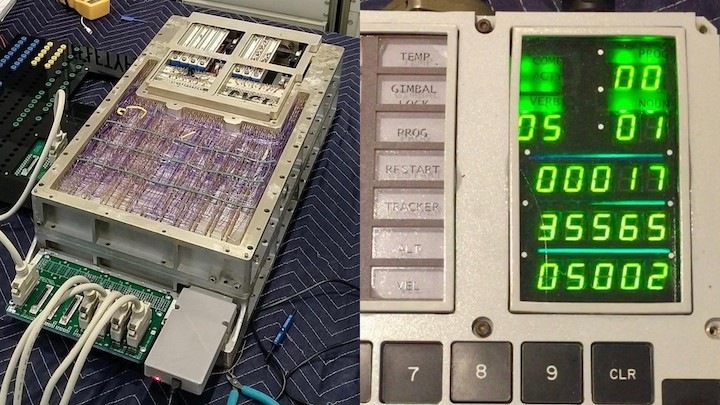 Over the years there’s been no shortage of creativity when it comes to innovative new Bitcoin mining efforts. We’ve seen mining rigs built in the back of Teslas, mining rigs powered by wind or human breath, and even mining rigs that harvest human body heat.

Tinkerer and software engineer Ken Shirriff has a rich, amazing history taking archaic systems and nursing them back to life. From old IBM 1401 mainframesto antiquated computers like the Xerox Alto, Shirriff can often be found restoring and reverse engineering systems of the past to help give us a better understanding of the hardware and software of the present, and future.

Shirriff’s latest project is the restoration of a 52 year old Apollo Guidance Computer (GDC), used on board each Apollo command module (CM) and Apollo Lunar Module (LM) during the Apollo program—and our adventures to the moon.

In a blog post, Shirriff notes that after getting the GDC up and running (the only one currently operational anywhere, he says), he decided to give it a more modern task: mining Bitcoin. Implementing the Bitcoin hash algorithm in assembly code on a 15-bit computer from the 60s took some elbow grease to get working, he says.

“At 10.3 seconds per hash, it would take a billion times the age of the universe to mine a block,” Siriff said of the effort. “Still faster than mining by hand or punch cards,” he noted. For some perspective, a $70 USB stick miner performs 130 billion hashes per second.

One of the first computers to use integrated circuits, the AGC was 70 pounds and under a cubic foot in size—something revolutionary for technology emerging from the mainframe era. That said, the computer was only capable of 40,000 additions per second; sluggish but still enough to help manage guidance, navigation, and engine control.

In a YouTube video, Shirriff shows his Bitcoin program running on the Apollo guidance computer with the results displayed on a custom made DSKY (Display/Keyboard)—since nobody was able to provide him with a working, original DSKY.

“The Apollo Guidance Computer took 5.15 seconds for one SHA-256 hash,” resulting in a hash rate of 10.3 seconds per Bitcoin hash, Shirriff notes.

Shirriff notes this isn’t his first run in with what he calls “absurd Bitcoin mining.”

He’s also documented his efforts to mine bitcoin by hand using just pencil and paper, which resulted in a hash rate of 0.67 hashes per day. He’s also toyed with using an IBM punch card mainframe computer (obtaining a hash rate of 80 seconds per hash), as well as the 1973 Xerox Alto, which also netted him a still tepid 1.5 hashes per second.

While Shirriff isn’t getting rich any time soon from his experiments, the “because I can” efforts are invaluable in terms of preserving older software, archiving computer history, and remindin