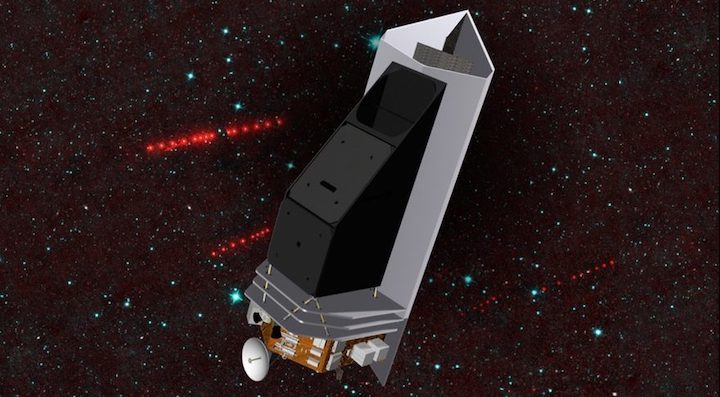 WASHINGTON — A report last month has buoyed the efforts of scientists seeking a dedicated mission to search for near Earth objects, although NASA has yet to commit to funding that mission.

The June 19 report by a National Academies committee concluded that a space-based infrared telescope is the best way to meet a goal established by Congress more than a decade ago of identifying all the potentially hazardous near Earth objects (NEOs) at least 140 meters in diameter.

“After hearing from representatives of different organizations, including persons who had sought to develop alternative proposals for both ground- and space-based NEO detection systems, the committee concluded that a space-based thermal-infrared telescope designed for discovering NEOs is the most effective option for meeting the George E. Brown Act completeness and size requirements in a timely fashion (i.e., approximately 10 years),” the report stated. The George E. Brown Act is a section of the 2005 NASA authorization act that directed NASA to detect at least 90 percent of NEOs at least 140 meters across by the end of 2020.

It’s long been clear to planetary scientists, and to NASA, that meeting the deadline was not feasible because of a lack of resources. “Although Congress has charged NASA with NEO detection and threat characterization, it has failed to provide specific funding to enable NASA to adequately pursue this task,” the report concluded.

For many years, some at NASA have pursued a concept called NEOCam, a space-based telescope devoted to infrared searches of NEOs. The report effectively endorsed that mission concept, concluding that alternatives such as ground-based telescopes or networks of smallsats are not “competitive with a thermal-infrared space telescope in terms of detection capabilities or cost.”

Advocates of NEOCam hope that the report can help build the case for funding the mission, likely outside of existing planetary science programs. NEOCam was one of five finalists in the latest competition for Discovery class missions. NASA ultimately selected in January 2017 two other asteroid missions, Lucy and Psyche, but did provide “extended Phase A” funding to continue work on the infrared detectors that NEOCam would use.

The Small Bodies Assessment Group (SBAG), an advisory group that covers both planetary science and planetary defense activities, raised the issue at its most recent meeting June 24 in College Park, Maryland. The group, in findings it approved at its previous meeting in January, expressed its support for NEOCam and added its concern that “the full NEOCam mission has not yet received funding to enter Phase B with launch still many years away.”

“NASA agrees that a space-based infrared NEO survey is the most capable system to achieve the George E. Brown congressional goal within a reasonable period of 10 years,” responded Lindley Johnson, NASA’s planetary defense officer, at the June SBAG meeting. “However, the planetary defense program does not currently have sufficient budget to pursue the full mission at this time.”

“We are still investing in some technology development for a space-based infrared survey, but it’s at kind of a low level,” said Lori Glaze, director of NASA’s planetary science division, at the SBAG meeting.

She added, though, that NASA’s planetary defense program, whose budget has grown in recent years to $150 million per year, is intended to support spacecraft missions. Much of that current funding is going to the Double Asteroid Redirect Test (DART) spacecraft, which will fly to the asteroid Didymos and collide with its small moon to test techniques to deflect hazardous asteroids. Funding for DART will decline after this year as it approaches its 2021 launch, creating a wedge that could be used for additional missions like NEOCam.

“Within the planetary defense budget line, there’s the intent to fly a series of missions, with DART being the first,” she said. NEOCam, she added, could be next. “We’re not quite committed to it yet, but it’s definitely something that we’re trying to work on at this point.”

Johnson said at the SBAG meeting that his office plans to develop a “roadmap” for the agency’s planetary defense activities, covering the period from 2023 through 2032. That would including planning for future missions that would include not just NEOCam but also concepts to send a mission to the asteroid Apophis when it makes a very close flyby of the Earth in 2029. That roadmap work will start before the end of this year and be completed by the end of fiscal year 2020.