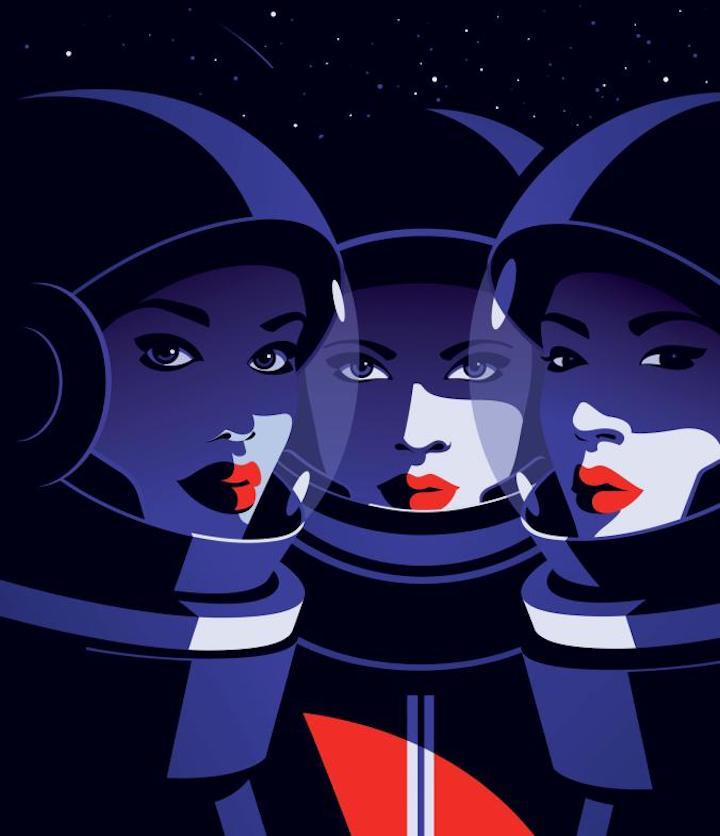 IF YOU’RE PACKING for an interplanetary space mission—one that’s very long and might involve populating a faraway world—sending an all-female astronaut crew could be an intelligent choice.

Before you raise an eyebrow at the prospect, remember that NASA recruited and flew only all-male crews for decades. In fact, in the 58 years that Earthlings have launched humans into orbit, about 11 percent of them—63 individuals—have been women.

“An all-female mission tends to be something that NASA has avoided in assignments because it seems like a stunt,” says Margaret Weitekamp, a curator at the National Air and Space Museum. But in some ways, women are potentially better suited for space travel than men.

Let’s focus on four factors. Women are generally smaller. Women suffer less from some problematic physical effects of spaceflight. Women have some personality traits more innately suited for long-duration missions. And last but hardly least: Populating another world requires reproduction, and so far that isn’t possible without biological women, whereas men’s contributions can be ... well, more on that later.

If you’re aiming for Mars—or the stars!—the contrast between sending enough food for a large man versus a small woman could end up being substantial.

First, the weight advantage. Sending lighter humans into space is just plain smart because rocketing weight into space, and maneuvering once you’re there, requires fuel, which costs money. “Some of us have speculated for years that having an all-female crew—or at least a crew of smaller individuals—would be advantageous from the total-mission-weight standpoint,” says Wayne Hale, former NASA engineer and space shuttle program manager.

Sending six smaller women into space for months or years could be significantly less expensive than sending six burly dudes, and lower body weights are just a small part of it. The rest of the difference comes from the amount of food, oxygen, and other resources needed to keep smaller humans alive. For a short-duration trip, the difference might be negligible. But if you’re aiming for Mars—or the stars!—the contrast between sending enough food for a large man versus a small woman could end up being substantial because, on average, men require 15 to 25 percent more calories a day than women.

It’s a difference that Kate Greene observed in 2013 while participating in a four-month-long simulated mission in a Mars habitat. Part of Greene’s assignment was to monitor the metabolic output of her crewmates—and on average, she reported, females expended less than half the calories of their male counterparts, despite similar activity levels.

On top of that, smaller people produce less waste (think carbon dioxide and other bodily excretions), which translates to lower demands on spacecraft systems designed to recycle and remove that junk.

So why not simply launch a crew of small humans, sexes be damned? Because human bodies respond differently to spaceflight, and though the data are relatively sparse—again, women haven’t flown much in space—it does seem that women’s bodies may have a slight edge in tolerating spaceflight’s effects.

For this discussion of who is sent into space, let’s define our terms as NASA did. In a research report titled “The Impact of Sex and Gender on Adaptation to Space,” sex was defined as “the classification of male or female according to an individual’s genetics.” Gender was defined as “a person’s self-representation as male or female based upon social interactions.” So far, when NASA has sent individuals into space, it has identified their sex, made no reference to their gender self-representation, and steered clear of the related matter of sexual orientation—that is, which sex(es) an individual finds attractive. —ND

Above Earth’s protective magnetic shield, exposure to damaging radiation occurs more quickly, causing an increased risk of cancer and other issues. Also, funky things happen in microgravity, where neither cells nor entire bodies can sense which direction is up or down. Fluids shift, immune responses decline, a handful of genes substantially change their expression patterns, and, problematically, eyesight enigmatically deteriorates.

Since the earliest days of the Mercury program, NASA has been gleaning medical data from its astronauts by studying their physiological responses to spaceflight. In 2014 the space agency released a large report compiled from decades of data. “It’s only been recently that we’ve had multiple women flying on missions,” so the findings on sex-based disparities are preliminary, says Virginia Wotring of the Center for Space Medicine at Baylor College of Medicine. Men seem to be less affected by space motion sickness but quicker to experience diminished hearing. Women appear to have a higher incidence of urinary tract infections (an issue not unique to spaceflight, as any woman will tell you).

More significantly, men tend to have problems with deteriorating vision, which women don’t experience as often or as severely. NASA astronaut Scott Kelly—who has spent a cumulative 520 days in space and has the eye problems to prove it—half-jokingly wrote in his autobiography that if scientists can’t figure out what’s causing those eye issues, “we just might have to send an all-women crew to Mars.”

FIRSTS FOR FEMALES IN SPACE 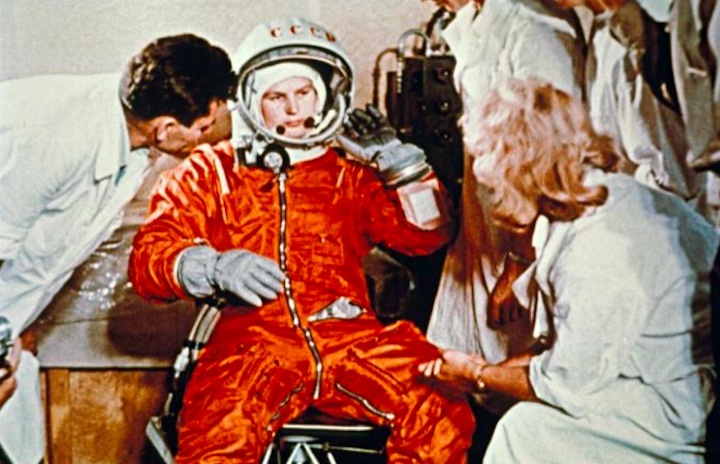 JUNE 16-19, 1963Valentina Tereshkova: The Soviet cosmonaut was the first woman in space. She spent about 70 hours in the spacecraft Vostok 6, completing 48 Earth orbits. 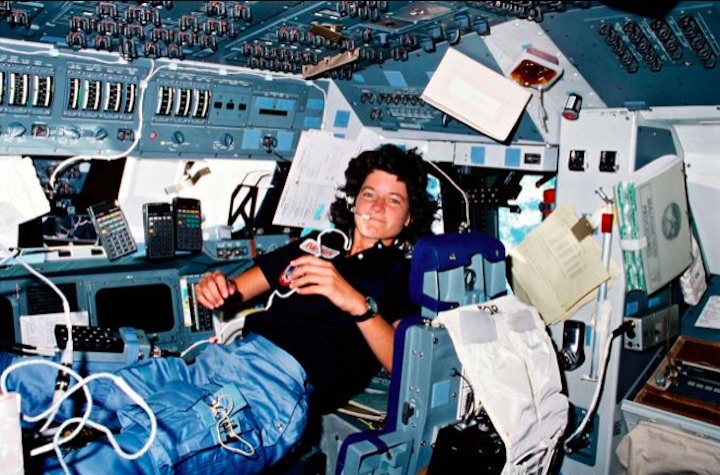 JUNE 18-24, 1983Sally Ride: The NASA astronaut became the first U.S. woman in space, as well as the third woman there, when she flew the Challenger space shuttle mission. 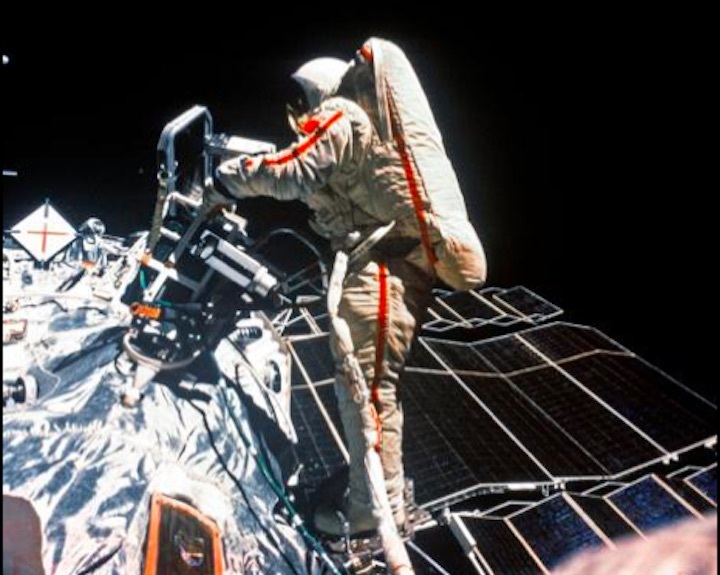 JULY 25, 1984Svetlana Savitskaya: The Soviet cosmonaut was the first woman to take a space walk, performing tasks outside the Salyut 7 space station for about 3.5 hours. 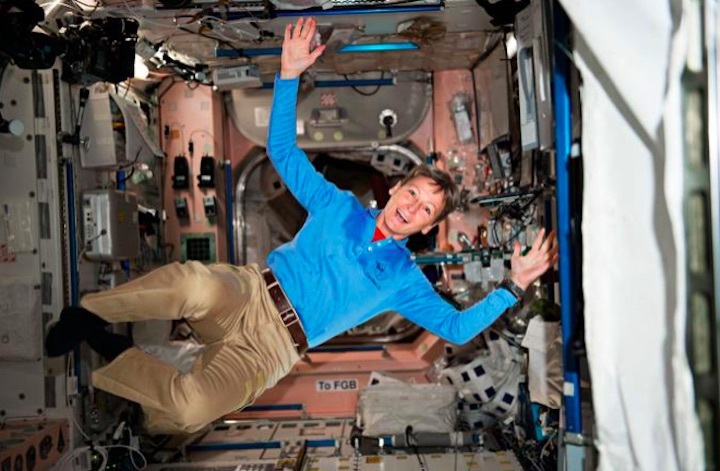 OCTOBER 10, 2008Peggy Whitson: The NASA astronaut became the first female International Space Station commander on a 2008 expedition; she held command there again in 2017.

Not a bad idea. But there are considerations beyond the physical. While cooped up in a cramped spaceship for months or years, how well would an all-female crew get along? It turns out (surprise!) that scientists know little about how all-female crews might fare in an intense and monotonous space environment.

In the few studies that have been done to identify factors in long-duration missions’ success or failure, scientists observed teams that experienced stressful Earth analogs such as desert survival treks, polar expeditions, and Antarctic winter-overs. They found that men tend to excel in shorter-term, goal-oriented situations, while women are better in longer-​term, habitation-type circumstances.

“People in habitation situations have to be more interpersonally sensitive. You have to notice, be more communicative,” says Sheryl Bishop, a University of Texas Medical Branch psychologist who specializes in studying group behavior. “Women are acculturated to have a lot of those skills to begin with.” That doesn’t mean men can’t get along well on long-duration space missions; it just means that the traits crucial for success on those missions are more typically associated with women.

Men tend to excel in shorter-term, goal-oriented situations, while women are better in longer-term, habitation-type circumstances.

Finally, there’s the issue that may be the least immediate and most provocative: populating a faraway planet. You could send a crew of three women and three men, and tell them to go have fun and make more humans. But again, looking at costs: Why send men when you can send just their contributions to the next generation, collected and cryopreserved in tiny vials? Sending an all-female crew and a sperm bank lets a space program economize while also increasing the genetic diversity of the parental pool.

Let’s review. In terms of value per pound, tolerance of physical effects, psychosocial skills, and ability to bear astro-babies, women seem well suited to lengthy space voyages. Does this mean, conversely, that there’s no reason to send men on these missions?

Not quite. Data on group dynamics suggest that in team endeavors, mixed-gender teams are the most successful overall. We can specify why females would do well on long-term space adventures—but we can’t say flatly that an all-female crew would do the best. (However, it would almost certainly be better than a crew of hefty, squinting, inflexible, barren guys.)

For 192 years, all U.S. Supreme Court justices were men. Asked when there’d be enough women on the court, Justice Ruth Bader Ginsburg shocked some people with her answer: “When there are nine.” There’s never been an all-female crew of astronauts in flight—but decades of all-male crews. When will there be enough women in the spacecraft? When everyone who’s qualified has an equal shot at a seat.

Raumfahrt - Here’s why women may be the best suited for spaceflight Physically and mentally, women have the right stuff for expeditions into deep space. So why send male astronauts at all?
1532 Views
Created with page4