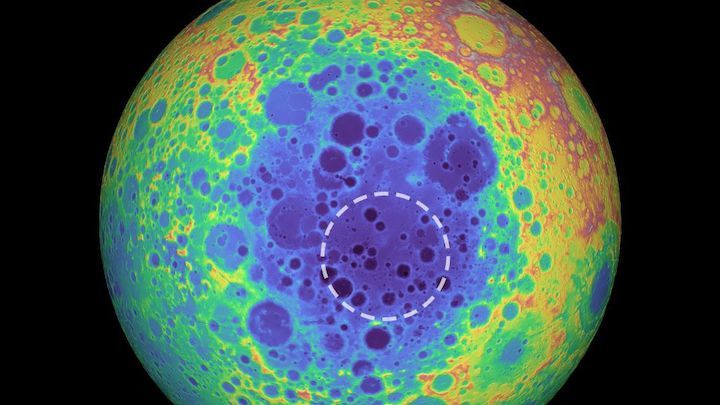 A topographical map of the far side of the moon shows the South Pole-Aitken basin in blue shades and the mass anomaly studied in the new research within the dashed line.
(Image: © NASA/Goddard Space Flight Center/University of Arizona)

There's something very weird, and very dense, under the surface of the moon's South Pole-Aitken basin, new research suggests.

That unexpectedly massive patch may represent the buried remains of an asteroid that crashed into the moon's surface and formed that basin in the first place. That new hypothesis is based on data from NASA's Gravity Recovery and Interior Laboratory (GRAIL) and Lunar Reconnaissance Orbiter missions. When the scientists combined the two types of data, they saw a mismatch between the surface topography and the gravitational tug of the moon.

"Imagine taking a pile of metal five times larger than the Big Island of Hawaii and burying it underground," study lead author Peter B. James, a geoscientist at Baylor University in Texas, said in a statement. "That's roughly how much unexpected mass we detected."

The research relied on two key missions in NASA's moon-exploration portfolio. The GRAIL mission included two spacecraft, which spent more than a year orbiting the moon, with each spacecraft using the other to map the gravitational tug of the moon. The Lunar Reconnaissance Orbiter has spent nearly 10 years at work and has made billions of measurements of the precise height of the moon's surface.

When it comes to the South Pole-Aitken basin, the topography is particularly striking. The feature is a massive crater stretching 1,240 miles (2,000 kilometers) across the far side of the moon, making it the largest crater planetary scientists know of to date. As the name implies, it's located near the south pole of the moon as well, and experts believe it was created perhaps 4 billion years ago.

So when the team saw an increase in the gravitational tug of the moon roughly lining up with the neighborhood of the South Pole-Aitken basin, the scientists wondered if the anomaly could trace directly back to the crater itself. "One of the explanations of this extra mass is that the metal from the asteroid that formed this crater is still embedded in the moon's mantle," James said.

Another possible explanation for the anomaly, the researchers wrote, is that the area is rich in oxides, which likely would have formed as the moon's ancient magma ocean cooled and solidified.

However it formed, the fact that the mass anomaly is still so prominent and that it seems to be located about 186 miles (300 km) down also offers scientists an intriguing idea: These facts suggest that the moon's insides can't be all that gooey; if they were, the moon's gravity would pull the massive patch into the lunar center.

The research is described in a paper published April 5 in the journal Geophysical Research Letters. 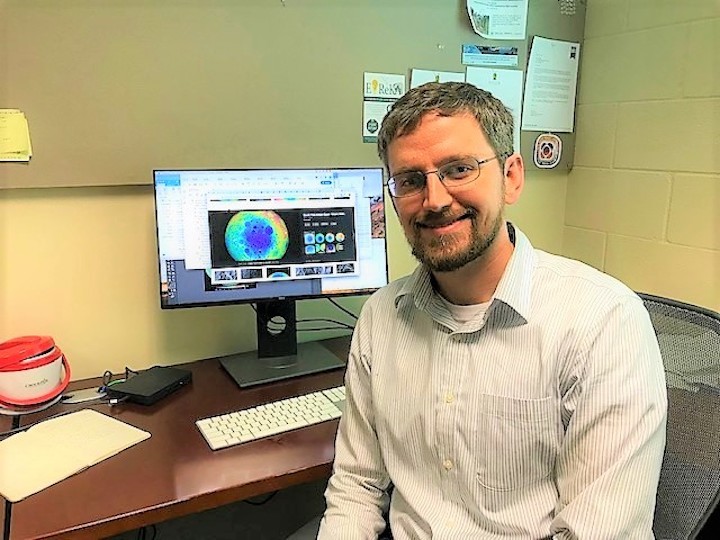 WACO, Texas (June 10, 2019) — A mysterious large mass of material has been discovered beneath the largest crater in our solar system — the Moon’s South Pole-Aitken basin — and may contain metal from an asteroid that crashed into the Moon and formed the crater, according to a Baylor University study.

“Imagine taking a pile of metal five times larger than the Big Island of Hawaii and burying it underground. That’s roughly how much unexpected mass we detected,” said lead author Peter B. James, Ph.D., assistant professor of planetary geophysics in Baylor’s College of Arts & Sciences.

The crater itself is oval-shaped, as wide as 2,000 kilometers — roughly the distance between Waco, Texas, and Washington, D.C. — and several miles deep. Despite its size, it cannot be seen from Earth because it is on the far side of the Moon.

The study — ”Deep Structure of the Lunar South Pole-Aitken Basin” — is published in the journal Geophysical Research Letters.

To measure subtle changes in the strength of gravity around the Moon, researchers analyzed data from spacecrafts used for the National Aeronautics and Space Administration (NASA) Gravity Recovery and Interior Laboratory (GRAIL) mission.

“When we combined that with lunar topography data from the Lunar Reconnaissance Orbiter, we discovered the unexpectedly large amount of mass hundreds of miles underneath the South Pole-Aitken basin,” James said. “One of the explanations of this extra mass is that the metal from the asteroid that formed this crater is still embedded in the Moon’s mantle.”

The dense mass — “whatever it is, wherever it came from” — is weighing the basin floor downward by more than half a mile, he said. Computer simulations of large asteroid impacts suggest that, under the right conditions, an iron-nickel core of an asteroid may be dispersed into the upper mantle (the layer between the Moon’s crust and core) during an impact.

“We did the math and showed that a sufficiently dispersed core of the asteroid that made the impact could remain suspended in the Moon’s mantle until the present day, rather than sinking to the Moon’s core,” James said.

Another possibility is that the large mass might be a concentration of dense oxides associated with the last stage of lunar magma ocean solidification.

James said that the South Pole-Aitken basin — thought to have been created about 4 billion years ago — is the largest preserved crater in the solar system. While larger impacts may have occurred throughout the solar system, including on Earth, most traces of those have been lost.

James called the basin “one of the best natural laboratories for studying catastrophic impact events, an ancient process that shaped all of the rocky planets and moons we see today.”

*This research was supported through the NASA Gravity Recovery and Interior Laboratory (GRAIL) science team.

ABOUT PETER B. JAMES

Peter B. James, Ph.D., served on the science team of three NASA missions: the Lunar Reconnaissance Orbiter (LRO), the Gravity Recovery and Interior Laboratory (GRAIL), and the MErcury Surface, Space ENvironment, GEochemistry, and Ranging (MESSENGER) mission. He is the founder of Baylor University’s Planetary Research Group, which is currently collaborating with Goddard Space Flight Center to study the properties of Mercury's crust and lithosphere. Dr. James specializes in the use of spacecraft data to study the crusts and mantles of planets and moons in our solar system. He earned his Ph.D. from the Massachusetts Institute of Technology.

Baylor University is a private Christian University and a nationally ranked research institution. The University provides a vibrant campus community for more than 17,000 students by blending interdisciplinary research with an international reputation for educational excellence and a faculty commitment to teaching and scholarship. Chartered in 1845 by the Republic of Texas through the efforts of Baptist pioneers, Baylor is the oldest continually operating University in Texas. Located in Waco, Baylor welcomes students from all 50 states and more than 90 countries to study a broad range of degrees among its 12 nationally recognized academic divisions.