When examining the files, Berlinner could not find this case. Sparks also makes a similar comment.2

The file does exist and can be downloaded. It was also investigated to some degree by the local AF base. As a result, there is enough information for analysis. The first report came in the form of a letter to the local Air Base.

According to the witness’ letter, he was on a fishing expedition at lake Bisteneau. When a storm came up, he decided to go to Ring- gold. Around 0230 CST and about six miles from Ringgold, he came over a hill and saw a large red colored half-moon shaped object. It was still raining and he went to a nearby house to get the residents to come out look. Because of the rain, the owner stayed inside. The witness added that the object settled above some trees in the distance and disappeared.3

When interviewed, the witness stated the object was more crescent than a half-moon. He stated the object was initially at an eleva- tion angle of 45 degrees but then descended to ground level over a 25 minute period.4 When he had attempted to get the residents of the house to come out, the UFO disappeared. The trees where the UFO supposedly landed was 4.5 miles west of Ringgold and a half-miles south of SR 154.5

There are some interesting points to consider. The exact time is somewhat confusing. The BB record card lists the time as 0830Z

6
but the AISS card says it was 0730Z. This probably has to do with a confusion about daylight savings time (DST). As best I can

tell, Louisiana was not on DST, which means the 0830Z time is correct.

Lake Bisteneau was about 8 miles west of Ringgold. The location of the sighting appears to have been between 4 and 6 miles from town. Using Google Earth7, a 1957 topographical map8, and a 1955 aerial photograph9, we can identify the approximate location of the sighting. The witness mentioned driving over a hill. There are two locations along the stretch of road that involve hills. Based on these locations, it seems the witness was either looking East-southeast or East. The aerial image from 1955 shows the southern side of the road was pretty open compared to current conditions. This is consistent with the comment about the tree line being some distance from the road. 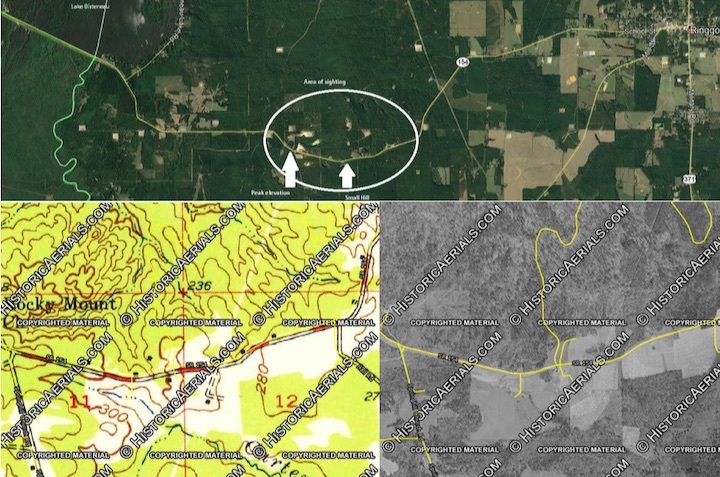 The measured elevation angle seems to be inaccurate. According to the witness, the object was initially sighted at an elevation angle of 45 degrees and then descended into some trees. Driving in a car usually does not allow for a witness to see such large elevation angles. This example shows a 1950s vehicle and the approximate maximum elevation angle for a driver. I checked a few modern vehicles using stars and sitting in the driver’s seat. The maximum angles of elevation were usually around 15-20 degrees. However, I am 6 foot 4 inches tall. A smaller person would be able to look up at a larger angle while driving. I doubt the angle could be greater than 25 degrees. I suspect that the witnesses initial angle of elevation for his UFO was probably less than 10 degrees.

At 0300AM CST, a waning crescent moon rose at an azimuth of 93 degrees. As demonstrated in the image below, the direction the moon was rising is marked with arrows. The area where there was a small hill (indicated by the small circle), the moon would have been slightly to the right of the witness and appeared to have been on the tree line just south of SR 154, as mentioned in the report. Between 0315-0330 AM, it would have been high enough to see peaking over the trees. The witness described the object as being “half-moon”, “red like blood”, and in the direction he was driving. The rising moon matches that description.

Arguments against the moon explanation are:

• The witness said it descended from 45 degrees to treetops.

Counter arguments to these points are:

Conclusion
In my opinion, this case should be reclassified as “possible moon” . While there are certain aspects of the case that tend to argue against this explanation, they are not fatal and can be explained as standard errors in observation/memory. If it were not for these issues, I would have classified this as “probable moon”.
Quelle: SUNlite 3/2019
UFO-Forschung - Projekt Blue Book - Teil-44
1421 Views
Created with page4