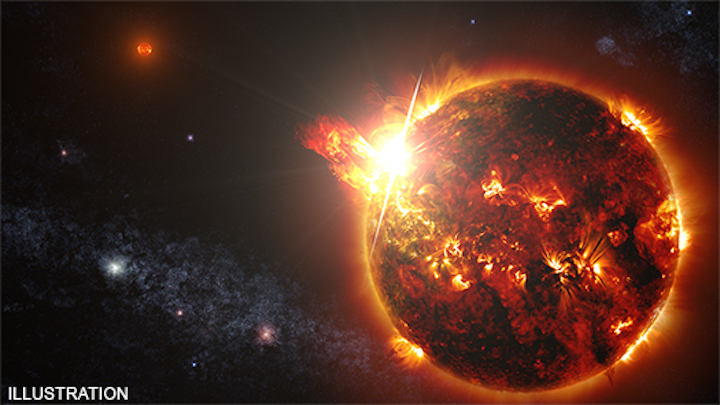 A group of researchers has identified and characterized for the first time in a complete way a powerful eruption in the atmosphere of the active star HR 9024, marked by an intense flash of X-rays followed by the emission of a giant bubble of plasma, ie hot gas containing charged particles. This is the first time a coronal mass ejection, or CME, has been seen in a star other than our Sun. The corona is the outer atmosphere of a star.

The work, appearing in an article in the latest issue of the journal Nature Astronomy, used data collected by NASA's Chandra X-ray Observatory. The results confirm that CMEs are produced in magnetically active stars and are relevant to stellar physics, and they also open the opportunity to systematically study such dramatic events in stars other than the Sun.

"The technique we used is based on monitoring the velocity of plasmas during a stellar flare," said Costanza Argiroffi (University of Palermo in Italy and associate researcher at the National Institute for Astrophysics in Italy) who led the study. "This is because, in analogy with the solar environment, it is expected that, during a flare, the plasma confined in the coronal loop where the flare takes place moves first upward, and then downwards reaching the lower layers of the stellar atmosphere. Moreover, there is also expected to be an additional motion, always directed upwards, due to the CME associated with the flare".

The team analyzed a particularly favorable flare, which took place on the active star HR 9024, about 450 light-years away from us. The High-Energy Transmission Grating Spectrometer, or HETGS, aboard Chandra is the only instrument that allows measurements of the motions of coronal plasmas with speeds of just a few tens of thousands of miles per hour.

The results of this observation clearly show that, during the flare, very hot material (between 18 to 45 million degrees Fahrenheit) first rises and then drops with speeds between 225,000 to 900,000 miles per hour. This is in excellent agreement with the expected behavior for the material linked to the stellar flare.

"This result, never achieved before, confirms that our understanding of the main phenomena that occur in flares is solid," said Argiroffi. "We were not so confident that our predictions could match in such a way with observations, because our understanding of flares is based almost completely on observations of the solar environment, where the most extreme flares are even a hundred thousand times less intense in the X-radiation emitted".

"The most important point of our work, however, is another: we found, after the flare, that the coldest plasma — at a temperature of 'only' seven million degrees Fahrenheit — rose from the star, with a constant speed of about 185,000 miles per hour," said Argiroffi. "And these data are exactly what one would have expected for the CME associated with the flare."

The Chandra data allowed, in addition to the speed, the mass of the studied CME to be obtained, equal to two billion billion pounds, about ten thousand times greater than the most massive CMEs launched into interplanetary space by the Sun, in agreement with the idea that the CMEs in active stars are larger-scale versions of solar CMEs. The observed speed of the CME, however, is significantly lower than expected. This suggests that the magnetic field in the active stars is probably less efficient in accelerating CMEs than the solar magnetic field.

Other materials about the findings are available at:
http://chandra.si.edu